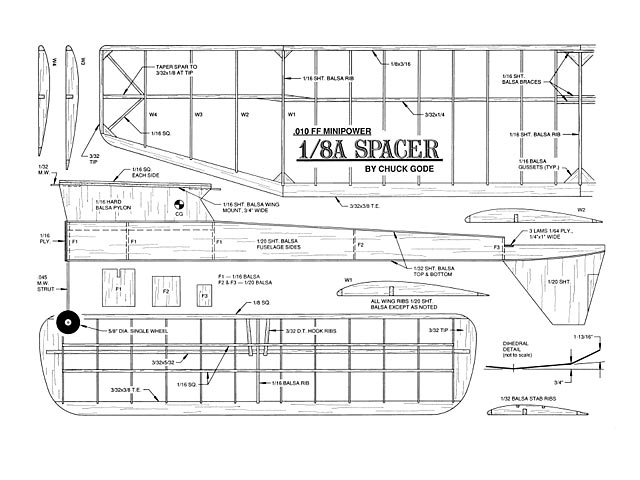 1/8A Spacer. Free flight model for .010 power. This is a scaled-down version of the Sal Taibi Spacer design, with a 100 sq in wing.

When the Model Builder Mini Power postal event was in the talking stage, a number of local free flighters came up with their own .010 designs. Fellow WMC member Chuck Gode (known locally as 'Lucky Chucky'), who has a love affair with Sal Taibi's Spacer (oz2099), decided that he would do one with a 100 square inch wing. Complete full-size plans for the model appear on the following two pages. Construction is very basic, so no construction notes are needed here. Just be sure to build it light! A couple of flight trimming tips for you:

1. The model is best trimmed to fly right power and right glide. To do so, build in a very slight amount (1/16 inch) of wash-in on the right main wing panel. After covering the wing, double check this wash-in to make certain it is unchanged.

2. Check the balance - it should be as shown on the plans.

3. Tilt the stabilizer so that the right side is about 1/2 inch higher than the left side (looking from the back of the model).

5. When you're satisfied with the glide, it's time for a test flight. My suggestion is that you use an eyedropper fuel tank mounted in a slot just behind the firewal I on the left side of the fuselage.

7. If the model climbs well immediately after launch but doesn't continue its right turn toward the end of the power run, make adjustments with the rudder tab.

8. The Spacer is a good flying ship, even though at 100 square inches it's a bit larger than the typical .010 model. It climbs well and has an exceptional glide. With this big a wing, it also stays in sight a bit longer than the smaller ships. Build it light, trim it out before your next contest and fly the wings off of it. Don't forget to set up the ship with a DT system - these little beasts thermal easily and can disappear in no time. I've lost two .010 models in just two summers by not installing a proper DT. " 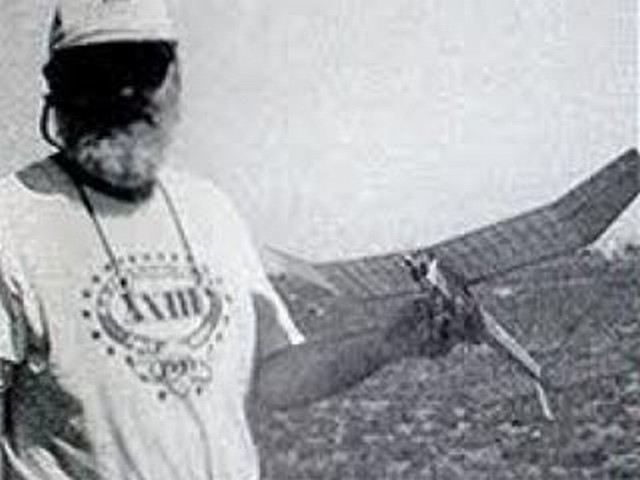