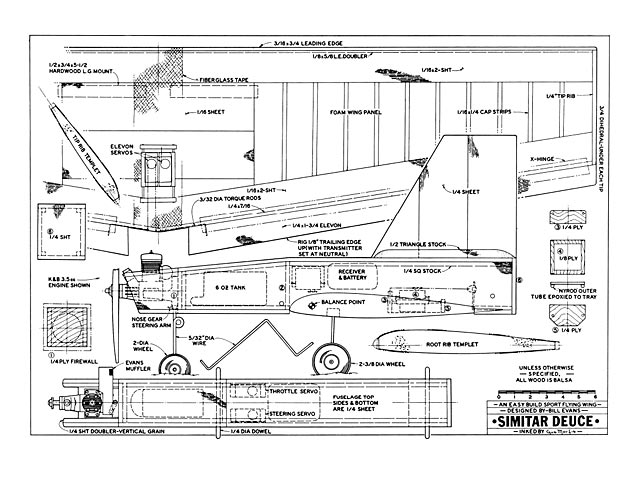 Quote: "Our author has been working on this configuration for years. The latest Simitar is for 3.5cc engines, giving spectacular performance. Simitar Deuce by Bill Evans.

The Similar Deuce is a much improved, updated version of the Simitar XV that proved so popular as a plans feature in Model Aviation several years ago. Improvements include the addition of a landing gear, a removable wing, larger radio compartment, more power and, consequently, higher performance levels. These modifications were incorporated as a result of input from many RICers who built and enjoyed the original Simitar these past five years, lndeed,Simitar XV was a top-selling plan at M.A. for three years. I think you'll like what we've done to the bird!

All aspects of the Deuce's flight performance actually make it easy to fly even if you are not the hottest pilot. By the same token, it can be spectacular in the hands of a real 'showman,' as evidenced by demonstrations at the Las Vegas Tournament of Champions.

Simitar Deuce stays where you put it - straight flight out or in a bank, it stays put. It is truly a flying machine with neutral stability. It will not stall and roll off on a wing as do conventional aircraft. If you do try to stall the Deuce, the nose will drop and flight is automatically resumed. This characteristic is particularly advantageous on landing approaches.

If you do manage to vertical climb the aircraft until it stops and then apply full aileron and elevator, you may put the Deuce into a flat spin from which it may not recover, I have flat spun the design from as high as 200 feet and the most damage has been a broken propeller and a bent landing gear. Indeed, a 9 pound, 60-powered Simitar in an inverted flat spin from 200 feet sustained no damage at all - not even a broken prop. Sound incredible? Well, that's what they all say when they first see the Deuce fly so let's get to building one for you.

Construction is very simple utilizing a hot-wire-cut foam wing and a basic balsa box for a fuselage. Fin and elevons are shaped balsa sheet..."

Quote: "This is the plan for the Simitar Deuce no longer being sold by Model Airplane News. Also the complete scanned construction article. More Simitar information can be found here: http://www.rcgroups.com/forums/showthread.php?t=502443 If a rudder is also desired, because it is so short coupled to the wing it must operate opposite of normal, i.e. for left rudder it needs to go right. Rudders on these short Simitars act like an aileron instead of a rudder." 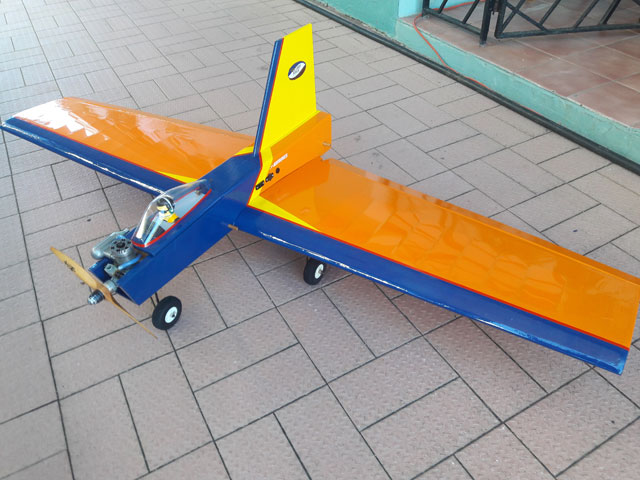 Hi Steve, Mary. Thank you for such a wonderful site. Here are some photos of a Simitar Deuce I built from the plans [model photo & more pics 003-005]. I added a canopy with dash and pilot on mine; I think it makes it look better.
RCYEAGER - 05/07/2019
Add a comment