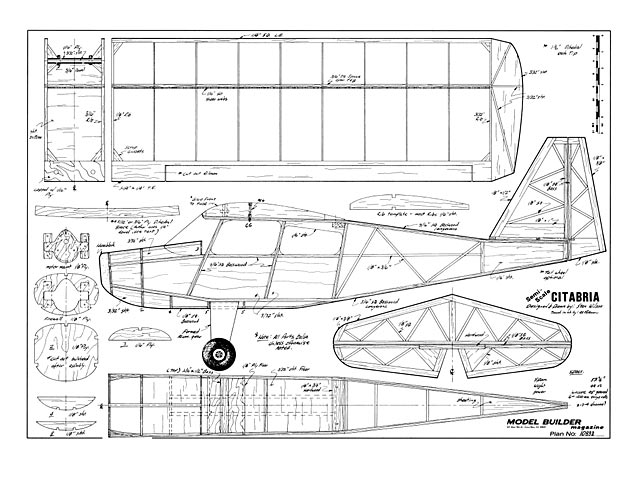 Quote: "Here is a simple, semi-scale, electric powered Citabria for you that's easy to build, lightweight, and a good performer on six cells. Clean, quiet, inexpensive fun, that's what it's all about. Electric Powered Citabria, by Stan Wilson.

I like my R/C planes to have the look of real airplanes, and the Citabria has always been a favorite of mine. The Leisure LT50 Gear Motor electric system offers some excellent characteristics which lend themselves quite well to scale flight and appearance. As the Citabria I had in mind was a rather large model, the climbing power generated by the 11-6 prop seemed perfect for achieving scale speed, while not falling out of the sky. With this in mind, I proceeded to design the model from three-views, using 'free flight rubber construction' for a light weight model. I omitted the wing struts as they only added drag, and no real support was needed by the wing. You may wish to add them for a more scale look, it's up to you.

FUSELAGE CONSTRUCTION: Begin by soaking the basswood longerons in water to enable them to make the correct bends. After they are sufficiently soft, pin the longerons and uprights on the fuselage side plans. The longerons will still be a little wet when you drop Hot Stuff on the joints, so you will get excellent bonding. I use Super 'T' Hot Stuff on all joints as filets.

Repeat this process after the first side has dried to make two fuselage sides. I then glue the 3/32 sheeting along the nose and cabin sides as indicated. Be sure to make a left and a right fuselage side. After the sides are dry, place them upside down, and install the fuselage crosspieces. I start by making the cabin area square and firm. Next, I add the cabin floor. This will enable you to draw the tail posts and nose together without having a banana-shaped fuselage.

Score the longerons (slightly) behind the cabin before pulling the tail post together. Install the remaining cross members at this time, Be sure to go back and fill in the score with Hot Stuff Super 'T' and Hot Shot. You should install the hardwood wing mounting block at this time. You will drill and tap it later to accept the nylon wing bolts.

Now is the time to install the bottom longerons. Cover the top of the fuselage between bulkheads one and three, and the bottom between one and four with sheeting. Soak the sheeting in water to make it pliable. You will now need to cut or grind out the second bulkhead to allow the motor to be inserted from the cabin.

MOTOR MOUNT The weak point of electric motors has always been the small armature shafts which sometimes bend on even the slightest blow. l designed this motor mount to allow the motor to slide in on impact, and to absorb the shock.

WING: The wing can be built for aileron control or without it. Pin the leading edge, trailing edge, and bottom spar to the plans, and glue the ribs, top spar, and wing tip. Allow this assembly to dry thoroughly. Add the braces to the wingtip and the sheer webbing. When completed, build the other wing in the same manner. After this is completed, block up each wingtip (at the last rib) 1-1/2 inches and sand in dihedral to the root rib.

Lightly sand the entire wing, center it over the fuselage, and drill the holes for the nylon wing bolts which will go through the trailing edge. Glue a small piece of plywood to the trailing edge to prevent the bolts from going through it when tightened down. If you plan to use ailerons, cut them out at this time, install the torque rods, and mark and cut the hinge locations.

TAIL ASSEMBLIES Tail construction is quite simple. Glue the appropriate balsa or Ihisswood over the plans, remove, and sand. 1I use basswood for the spar in the stabilizer to provide extra strength. Cutting hinge slots in the basswood is more difficult, but it is worth the extra effort.

FINAL ASSEMBLY: The entire fuselage, wing and tail surfaces should be sanded lightly and vacuumed to remove any dust. Cut all slots for the hinges and exits for the pushrods. You may either tap the hardwood block for the nylon wing bolts, or use a T-nuts on the underside of the block.

Mounting the landing gear Ts somewhat tricky as the formed aluminum gear must be slid under the bottom longerons and hotted to the plywood mount. I then glue a piece of 1/4-inch square between the No. 5s just where the gear exits. Sand these to the shape of the No. 5s.

Covering is conventional with your choice of coverings. Silk would be more appropriate with a vintage model. The two pierces glued between the No. 5s wiill allow the entire bottom to be covered.

After overing, glue the tailpieces to the fuselage, install the hinges and bell-cranks, and install the motor and radio. The radio compartment is large enough to accept almost any radio and your choice of throttles or off/on switches. I use the high/off/low switch which I described in the construction article for the Pleaser (oz12598) see the May 1983 Model Builder.

FLYING: The first hand-launch was almost a picture perfect flight. The flying speed was very scale-like. The 11-6 prop pulled her up very well. I climbed out to a sufficiently safe altitude and made the first turn (I fly with the rudder/aileron coupled). After about two minutes, I had enough altitude to switch to the low speed and enjoyed a very relaxed flight. The low speed was perhaps a little too low as she did begin a slow descent. I then switched back to high and climbed up again.

I get consistent seven to nine-minute flights using the Leisure geared motor with six cells of 1.2 ah capacity. If one wants a little more power without the hi/low features, seven cells would give more altitude.

After disconnecting the rudder/aileron couple, the Citabria will perform slow rolls. The glide is very gentle, and with a little planning, plus the use of low power, she will drift in for a very smooth landing right at your feet." 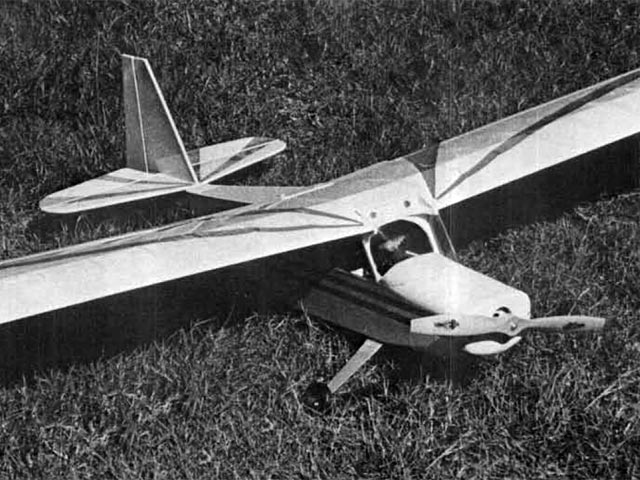