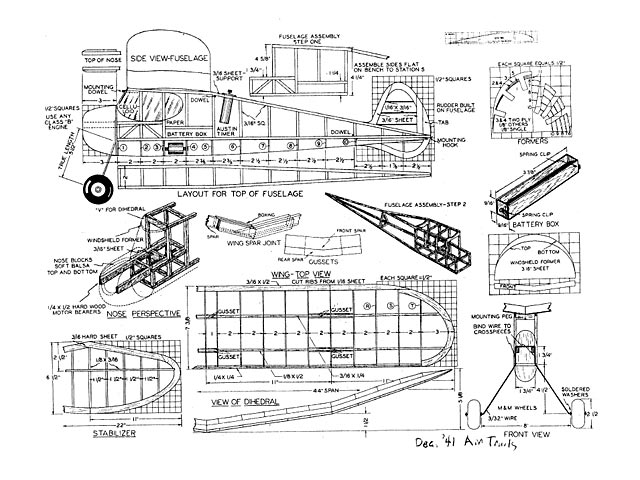 Request. Free flight cabin model for class A or B power.

Quote: "THE Request was designed to give good flying results. It lived up to our expectations in more ways than one. The ship was first flown as Class A with the new Bantam engine. This combination was considered hot. Later the ship was sold.

The new owner used a Hi-Speed engine and the model's glide was improved despite the additional two ounces of engine weight. The new owner was disappointed. It seems he wanted the model to perform like a real ship, and the only type of flight it turned in was that of a scientific model constantly pointing its nose to the sky and climbing until the ignition timer stopped the engine. flights of this description were common even under low power. under increased power the model would not fly at a greater angle but would climb at a faster rate of speed.

At a recent contest a stunt event was being run off. The Re-quest was entered and adjusted to loop. Positive incidence was applied to the wing and negative to the tail. During the flights the engine was opened to the limit. The ship climbed with a ter-rific rate of speed yet showed no signs of looping.

And now a few words in reference to the construction. Stream-lining vas incorporated in the job if it provided

some strength. The large nose block added strength to the ship's nose. The fuselage brought to a triangle (cross-sectional view) at the rear gave strength to that portion. The round formers and their stringers built on the underside of the fuselage combined with the triangular-shaped top side gave the body a more or less teardrop cross section, which offers less resistance than a square or a rectangle. Additional streamlining is offered by celluloid windshield.

With regard to the aerodynamical viewpoint. The thrust line is de-signed just high enough to make pos-sible a fairly short landing gear, thereby cutting down considerable drag. The polyhedral wing gives the ship a 'rolling' flight characteristic while the ship is climbing instead of the tight spirals that sometimes spin a model to destruction. The stabilizer is placed low in regard to the wing to afford a biplane effect, thus increasing stability. The main wing dihedral and the rudder combination are planned so that the ship can be made to spiral in either direction by simply using the rudder tab.

The fuselage, is built in the con-ventional manner. One side is built upon the other. When dry, remove from the plan and separate the lower longerons and a portion of the top longerons (the short distance up to where the triangle starts). The cross-pieces are cemented in their respec-tive places. The formers are cut out of stock, notched and cemented to the bottom side of the fuselage. The stringers are then added. The motor mounts are shaped and mounted in the fuselage with plenty of cement. The landing gear is bent to shape, then cemented and bound to the up-rights and motor bearers. The nose block is cemented lightly in position and then carved to shape. After it is removed it is hollowed out until its wall thickness is about 1/4 in.

The wing is of the two-spar-type construction. Make a full-size draw-ing. Cut sufficient ribs and wing-tip parts from the correct thicknesses of sheet stock. Construct wing and put gussets at each break in dihedral.

The stabilizer is made of sheet stock and ribs. When dry, sand to a streamline section. The rudder is made in a similar fashion. The coil and batteries are then installed. The easiest way to find their location is to mount motor, wheels and stabilizer and then measure off 30 percent from the leading edge of the wing, placing the weights so that the model balances at that point."

Quote: "This design appeared earlier in this thread, but, at least the way it looked on my computer, the scan wasn't so great. The Request was a 44 inch power free flight design that appeared in the 1941 Air Trails. It comes to us via the Nov.-Dec. 2001 Max Fax, edited by Stew Myers. Bill Northrop printed this plan in the Sept. 1986 Model Builder, and pointed out a number of errors on the drawing. Apparently there's something odd about the size of the stab vs. the half inch squares on the drawing. He also said the front spar drawn didn't match the size specified. He also wrote that the 'layout for top of fuselage' is really for the main bottom longerons. The top longerons join part way back, as shown in the sketch. I remain agnostic as to who's right in some cases, though others are obvious."

Note: this is not a full-size plan.

A CAD redrawn version of the Request plan, thanks to hogal. Quote: "On checking the plan there are a large number of anomalies so, as a break to tradition, I thought I would knock a drawing out with the corrections on it. On the original the half inch squares are different sizes on all aspects and, I think, were there as a guide when scaling up from the magazine drawing. Well that's the theory so I started and assumed the dimensions on the drawing were correct. In fact they work quite well until the stabiliser. The drawing quotes 22" x 6½". However, if you draw it to the aspect ratio shown, you end up with 22" x 13" (or 11" X 6½" of course). On my drawing I've gone with 22" x 6½" which I believe is about right with respect to areas, but it does look skinny compared with the original drawing." 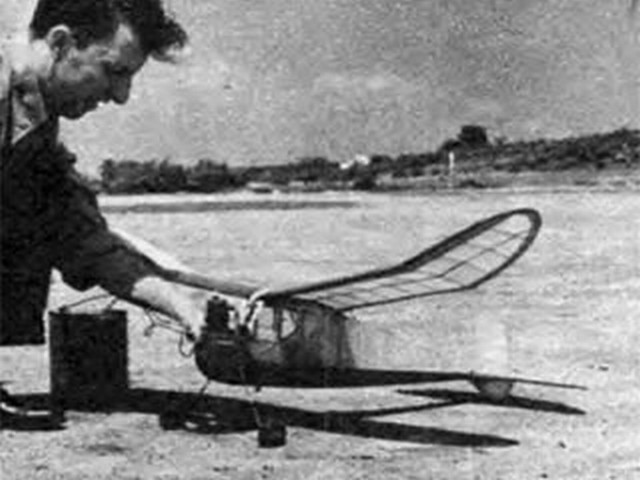 re. the 'stabilizer controversy'. If you count the 1/2" squares, you arrive at a 6 1/2" x 16" stab, matching the aspect ratio on the plan. I'm too lazy to figure the area, but it would obviously be less than the 6 1/2" x 22" version. I suppose the thing would be to build both and see which is best!
DaveRamsey - 30/03/2013
In 1989, I built one from a Klarich Kit that used a John Pond plan. The stab measured 22 inches. Ehling was still alive and so I wrote to him. He wasn't sure of the span but knew it wouldn't be half as long as the wing. I obtained the plan for the old Micro Models .020 replica and scaled up the stab on that plan. My father had built that version but it flew away. It was a great flyer but it had no DT. Other than the stab, it diverged considerably from the Air Trails drawing.
I first flew mine with an Argo Elfin but it was squirrelly. I had a little bit of success with it as a 1/2A texaco as long as I didn't make any control inputs in the climb.
I think Ehling's Boomerang would be a better candidate for R/C Assist. It has many of the features but is elongated.
Tom - 31/07/2020
Add a comment