THE high-wing design of the Fairchild Argus lends itself rather well to the scale flying model builder. Intended as a 'follow-on' type to the little ABC Robin (oz6835) which I described in the July 1948, issue of the Aeromodeller, the 1/12th scale 24 W.41a Argus shown here should provide no difficulty to the average scale enthusiast.

The working drawing, a 1/4 scale reproduction of which appears on the accompanying pages, together with the Bagley cut-away drawing (Page 652) fully explains the method of construction and it is only necessary to explain one or two points which might give rise to queries of a technical nature.

The undercarriage is built in two identical halves, each being pivoted at the bottom longerons. The upper strut ends in a loop, through which is threaded a stout rubber band which in turn passes through a paper or celluloid tube glued and bound to the top longerons. This provides all the spring that will be found necessary to absorb normal landing shocks.

The interplane struts, as in the Robin, are glued to the wing spars at one end and fit into brass sockets on the undercarriage at the other end. A hardwood peg at the lower end provides anchorage for the rubber band which ensures that both struts are retained in their sockets.

THE late Eddie Riding's very accurate scale model of the Fairchild Argus has been a popular item in the Aeromodeller Plans Service since its introduction in October 1947, for this rather hump-backed cabin design has ideal proportions for satisfactory duration flight. As a rubber model, we have even heard of one fly-away (who would think of fitting a dethermaliser!) so we were not altogether surprised to learn that scale enthusiast J Bridgewood of Doncaster made a two-minute flight from a 15 sec power run with his converted version. He uses a Mills 75 on beam mounts, with 3° downthrust and 1° left thrust ; but hastens to assure us that any of the 5 cc diesels will give ample power output for this 1 in to 1 ft scale model [see main pic].

HG Moore of Bognor Regis is another modeller who has successfully converted the design, and he sends us details which are well illustrated with a close-up photograph [pic 006]. For those who have the plan, or are wanting to build the model from the full-size drawings available with printed illustrated instruction sheet for 3 /— post free from the Aeromodeller Plans Service, we give his modifica-tions as follows.

Make up the cowling from the same materials as for the normal rubber version, but finish the basic fuselage frame at F.4 which is now a solid bulkhead. F1 and 2 are cut in two halves with a horizontal dividing line, and the open square for rubber clearance is not cut out. F3 is cut 'solid' and a duplicate of its top half is cut to back the detach-able half of the cowl, Before assembling the cowl, cut each of the lower halves of F1, 2, and 3, 3/16 in below the centre line, to allow for the engine platform. Then tack the bulkhead halves together (with 3/16 spacers in 1, 2, and 3) and assemble with a stringer let into each side, on the front of the fuselage at F4. Wrap 3/32 sheet around the nose cowl, add the nose ring and 1/32 sheeting aft of F4, then cut away along the centre line and on the front face of F4.

The detached to cowl will be as seen in the photo. Insides of F1, 2, and 3, will have to be cut away for engine clearance, and a hard 1/8 balsa platform let in on top of the lower cowl. This will leave the cowl sides and nose ring 1/16 proud of the platform, and another sheet of 1/16 ply should be cut to fit this area very accurately. Both the ply and 1/8 in balsa are cut to suit the crankcase, and drilled to take the mounting bolts. When drilling these holes and mounting the engine, Mr Moore advises that as much right sidethrust as the cowl will tolerate should be built-in, although it is as well to remember that the other converted model mentioned earlier, was satisfactory with left thrust.

The rear of the ply platform can be packed up for downthrust, 1/8 in being required, but it should be noted that this will bring the engine mounting out of its true location, and too much downthrust can make the mounting a loose and undesirable fit. Normally the engine is held in place by sandwiching between the cowl halves, held there by stout rubber bands around the cowling groove. For extra safety, we would peg the ply platform on to the 1/8 balsa, or screw it in place.

All right? Now if you have an engine of the .5 to .87 cc class, especially one of the newer type point-fives, these modification instructions will help you build a job that is accurate beyond dispute, and as we have already emphasised, is capable of some really pretty flying. Wingspan is 37 inches." 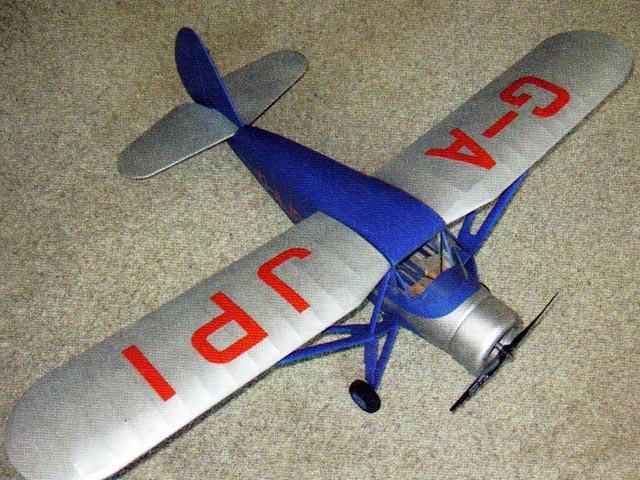 This is a really good plan and converts to electric power without too much trouble. If built light it will fly on a KP02 motor but a small outrunner is better. The written instruction say it came out to just over 7 ounces but mine was a bit heavier than that. Nice model though
jack shettle - 18/06/2020
Add a comment