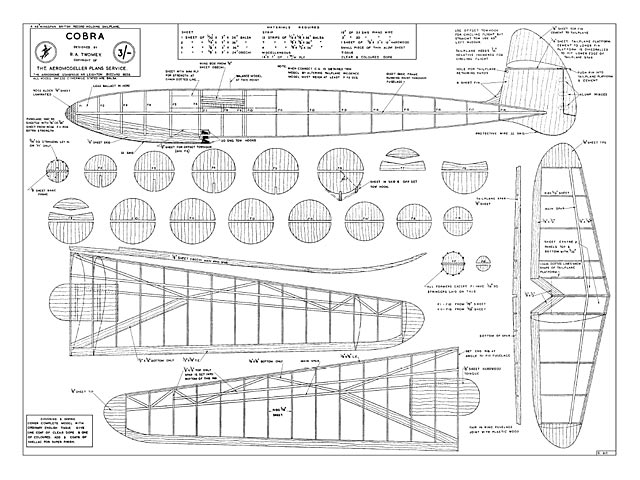 It is not always that a sailplane possesses both good hand launch and tow launch qualities together. This very useful characteristic, however, is noticeable when one flies the 'Cobra'. This is fully demonstrated by the 6 min 46.8 sec flight which won for its young designer the British Hand Launch Class 'A' record. Everyone will agree that this is a remarkably good hand launch time for a small sailplane but the Cobra is far from limited to hand launching flights alone. For instance, amongst its best performances are an unofficial 31 min and a club record of 7 min 2 sec from which flight the model was never recovered, disappearing into the blue at a great height.

Quite a few models can put up a useful performance givtri friendly weather conditions, but the Cobra is capable of holding its own in any weather. For instance, at a club competition it took first place with 2 min 21.1 sec OOS and 3 min 8.2 sec OOS, finally being lost on the second flight. This was under very bad and windy weather conditions, and it led the field despite the loss of the model enabling the owner to make only two of the scheduled three flights of the other competitors.

Construction is very simple as can be seen from the plan and very little difficulty should be experienced. Trimming is carried out in the usual way, first checking the CG position, and then trimming the model for straight flights before any circling is attempted."

Quote: "Hi. Back to the 1940s with the May 1949 AEROMODELLER... The next free flight plans were for a British hand launched Sailplane record holder the COBRA by R.TWOMEY. This is a very elegant looking Sailplane with it’s upward rising wing platform, circular fuselage and high tailplane which can just as easily be flown from a tow-line. Mr Twomey said construction was very easy but it took me a while to work out how the fuselage went together. They were giants in those days. The plan was a 1/4 scale reproduction."

Update 07/04/2017: Replaced this plan with a clearer copy (patterned background removed) thanks to TonyP. 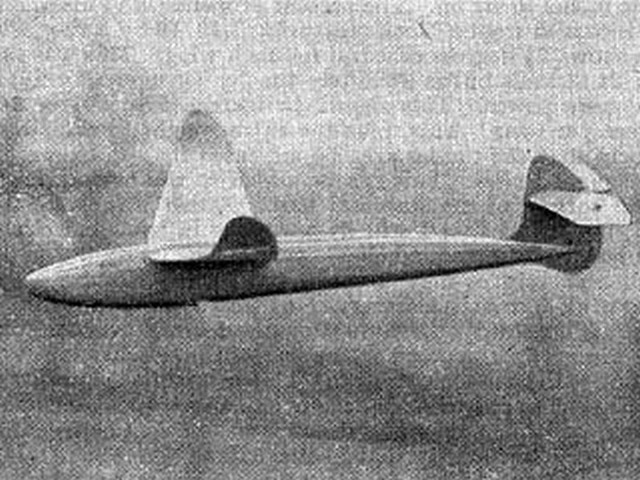