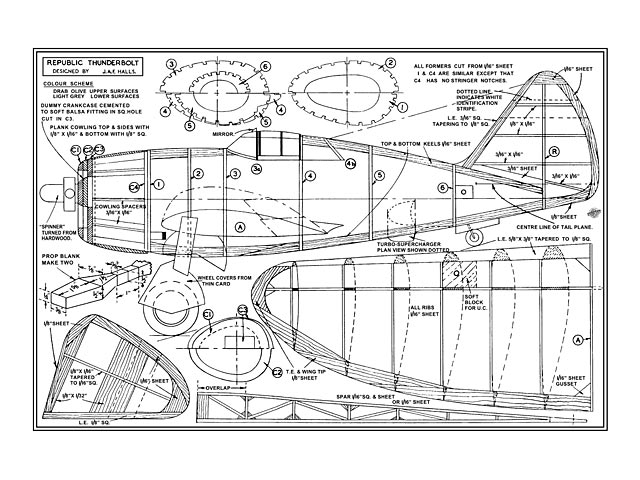 LARGE numbers of Thunderbolt fighters are in service in this country and have earned high praise from the pilots flying them. Thunderbolts form the mainstay of the USAAF in Britain and, together with Mustangs and Lightnings, are often seen escorting formations of Fortresses and Liberators.

The Thunderbolt is of all-metal construction, the fuselage being a monocoque structure with light alloy stressed-skin covering. The wings and tail unit are covered with stressed-skin, with fabric over the movable control surfaces. A four-bladed Curtiss electric constant-speed airscrew is fitted and is driven by a 2,000 hp. Pratt & Whitney Double-Wasp eighteen-cylinder radial motor.

The following dimensions have just been received from the manufacturers, and it will be noted that the length is considerably greater than the figure quoted earlier: span, 40 ft 9-5/16 in; length, 35 ft 5-3/16 in.

Thunderbolts carry the usual drab camouflage on the sides and upper surfaces, while the undersides are light grey. The national marking is carried on each side of the fuselage and usually above and below both wing tips. In common with other US types, Thunderbolts are now appearing in their original metal finish.

Quote:- "Going this time to the October 1944 AEROMODELLER ...a scale rubber WWII fighter the REPUBLIC P-47 designed by J.A.F. HALLS. The plan is full size and it would build into an attractive model."

Update 27/03/2013: Replaced this copy with a better version of the plan, thanks to planeman.

Update 13/09/2021: Replaced this plan with a clearer copy (patterned background removed), thanks to TonyP. 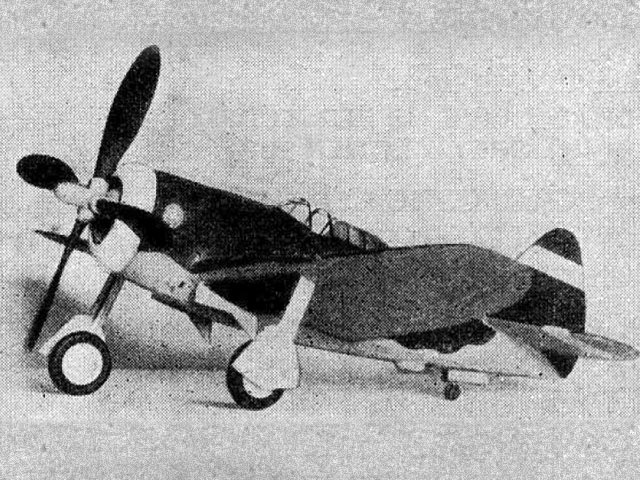