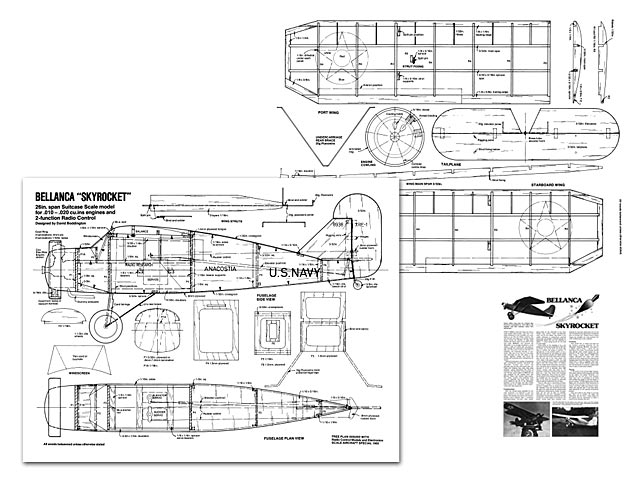 Has it been a long time since you built a small model? Have no fear, 1/32 and 1/16 sheet balsawood is still available and much easier to cut than the thicker versions. You will find that your finger and thumbs, having grown during the building of large scale models, will shrink again as you start on this mini scale Bellanca.

Just because the Skyrocket is, by average standards, a small model it does not follow that you have to rush through the construction and finishing; take your time over it and you will find it a satisfying and intriguing exercise. In particular, take care to out out all of the parts very accurately as this will assist in the 'gluing together' phases and avoid the cursing and swearing when components do not fit!

Bellanca produced a number of interesting light commercial aircraft, including the Columbia, Cruisair and Junior'and although they are less well known than the Pipers and Cesenas they make ideal scale subjects - good proportions and plenty of character. The Skyrocket had a wing span of over 46 feet, gross weight of 4600 lbs and was powered by the reliable Pratt and Whitney Wasp nine cylinder radial engine. The roomy interior and excellent load carrying capability (the wide chord wing struts adding to the lift) of the Skyrocket appealed to the US Navy and they utilised these aircraft in the 1930s, mostly for experiments with radio equipment.

Construction. With the limited space available for the radio equipment it is essential to plan the exact positions of the servos, receiver and battery. No switches are used on the Century Systems micro airborne pack, a combined isolating/charging mini-jack plug socket being fitted on the underside of the nose. Closed loop control, using monofilament nylon line for the cables, was fitted to the rudder, although a conventional push rod would also be suitable. Pushrods should be positioned before the top rear sheeting is added - it saves fishing around for the ends at a later stage.

Wing fixing to the fuselage is by a ply tongue at the rear and a single 6 b.a. bolt into an anchor nut at the front; the struts also help to restrain the wings in positive G manoeuvres. If this method seems to be a little too permanent for your liking, you could use wing retaining dowels and rubber bands, but sheet the top of the wing centre section and the first bay of the wing panels with 1/32 sheet if this system is used.

You need not be concerned about building a substantial engine cowl and cooling ring, it is unlikely that the model will be excessively nose heavy and it would be folly to attempt to fly it with a rearward C of G. A relatively thick ABS vacuum formed cowl was used on the prototype model but it would be quite easy to build up a cowl from sheet and triangular section balsawood. Wing struts are permanently hinged to the fuselage with split pins - the smallest size you can obtain - and the tops of the struts are retained by pianowire rods into split pin heads fixed into the wing

There is little point in describing the basic construction in details, it is conventional box structure fuselage, built up wings and sheet tail surfaces, if you can't build this one from the plans you really should be concentrating on training or simple sports models. As usual, keep the tail end as light as poseible, otherwise you may find it necessary to add noseweight. Cyanocrylate adhesives will help to keep the overall weight to a minimum, the slower drying types give valuable extra seconds for accurate positioning and the set can be speeded up by spraying an accelerator from an aerosol can. Thread control surface hinges are probably the most practical but mylar drafting tape is less unsightly.

This little lightweight tips the scales at just under 8oz ready to go..." 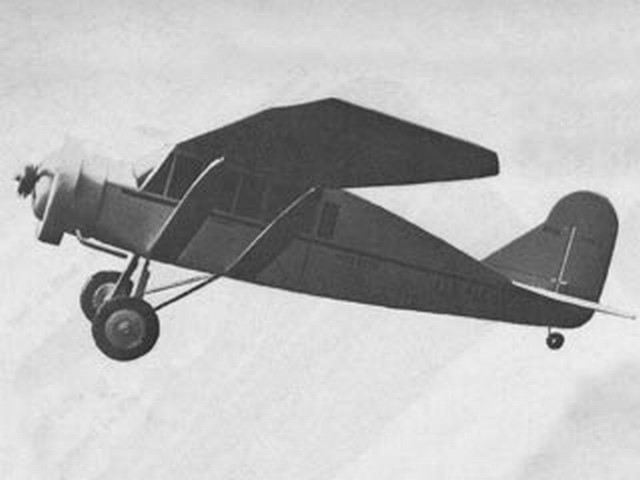