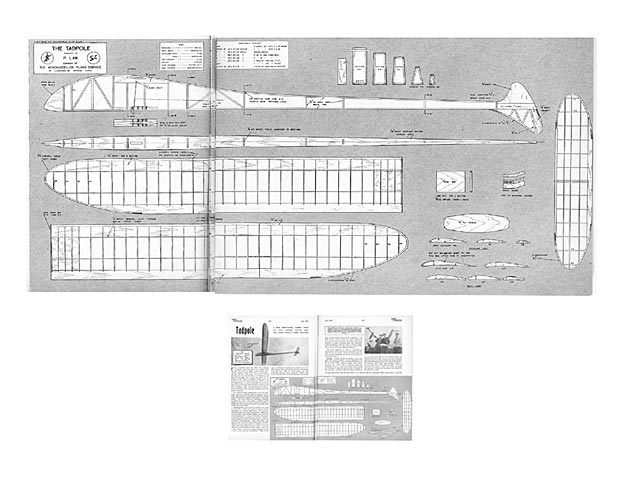 FIRST designed early in 1952. the original 'Tadpole' was never flown in a contest until the '52 A/2 Finals at Digby, when, due to over-careful pruning of the DT fuse, it returned a 14:26 total for sixth place. A second version, flown by R Law, placed fifth in the Thurston, at the '52 Nationals, and a third was flown by D Ridley in the Trials at Kidlington this year, the designer's own job having been lost earlier on in the eliminators. A still air average time of 4:20 on a 328 ft line has been attained by each of the three models to date, and top-of-the-line tows in any conditions have proved standard practice, factors which put this semi-pod and boom job into the top bracket.

The relatively high aspect ratio of 13:1 for optimum efficiency, demands that for general portability, the winghalves should be detachable. Tongue and box fitting was selected, both for its 'knock-aff-ability' and sure method of obtaining identical incidence for each wing panel. Tongues which appear to loosen up in warm weather can easily be dampened and so expand to make a desirable tight fit into the wing boxes.

Construction commences by building two sides over the plan; these are removed, sheeted before separation, to prevent distortion. and joined at the wing tongue, checking squareneas. When dry, install tongue, auto-rudder trigger, and towhook, cementing securely..."

Note this is not a full size plan, this is a scan of the original magazine pages, as printed. For more detail see the supplement file, hogal's excellent vector work. 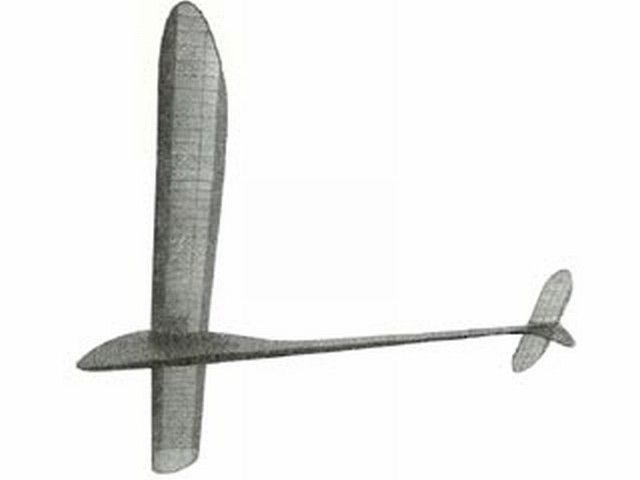