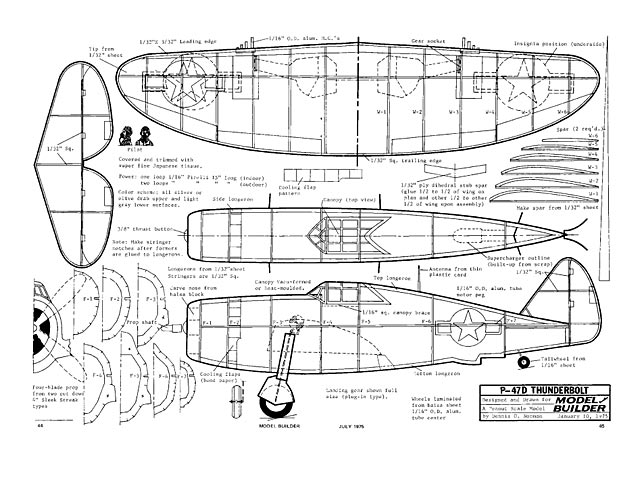 Who can resist the rugged lines of this famous World War II fighter? Even in Peanut form it doesn't appear dainty or delicate. Put the gear 'up' and fly it the way it looks best.

Most flying scale buffs will agree that 'flight points' usually go to the guys with the high wing monoplanes. This is particularly true with peanut types. Even so it is hard to resist the sleek, glam-orous, aircraft of World War II. The razorback Thunderbolt is a subject I have built many times in many sizes. Although flight times never equal those high wing jobs, I have caught 16 inch span Thunderbolts in thermals, and believe me, it is as exciting as any free-flight experience.

With the popularity of the peanuts I had to try a razorback with a 13 inch span. My first effort was so over-decorated (the model weighed 21 grams!) that flights never exceeded four or five seconds.

Returning to the proverbial drawing board, l built a second version with strict attention to weight saving. Not only was the structure lightened, but also the model was decorated with tissue as much as possible. A friend (who remains anonymous for his own protection) provided me with one sheet of pre-World War II silver Japanese tissue. This proved quite light and gave the model a good basic color. Further weight saving was gained by the use of colored tissue for the markings, etc.

Construction is conventional, with emphasis on low weight. The model is built almost entirely of 1/32 medium, straight-grained balsa.

FUSELAGE CONSTRUCTION: Begin fuselage construction by cutting the top, bottom, and side longerons from 1/32 sheet. The formers (shown in half section on the plan) are cut as single units. Having done so, place 1/32 square balsa braces at the top and bottom of each former for added strength. Notches for longerons should be cut in each for-mer, but stringer notches should not be cut until after the formers are in place on the longerons.

There are several approaches to fuselage assembly, but I prefer to begin by placing the top and bottom longerons on the plan. These are held together with scrap pieces of 1/32 square balsa at the nose and tail. Having done this, I lift them off and then slide the individual formers in place and add the side longerons. Once the basic assembly is dry, make the 1/32 square stringer notches by gluing a 1/32 wide strip of medium..." 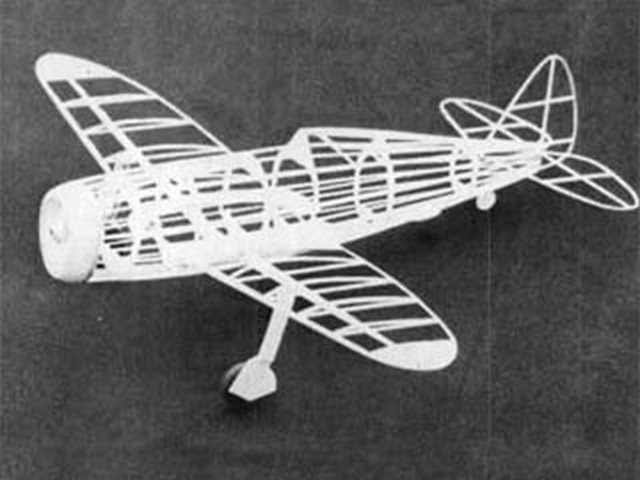