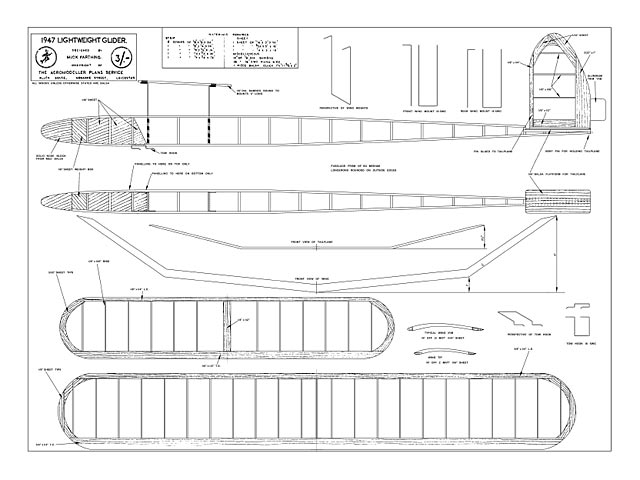 DURING the past 5 years much experimental work has been carried out, in certain circles, on the subject of Lightweight Model Aircraft. As the interest in this particular branch of our hobby seems to have grown considerably of late, it was thought that it was high time an article was written on the subject.

Due to space limitations, it has been decided to limit this particular article to Lightweight Sailplanes and to discuss the other half of the branch, namely Light-weight rubber powered models, at some later date. It is also hoped later to discuss the power model question. Much has been written on the latter, and many plans have appeared in journals in this country. Nevertheless, statistics show that Great Britain is still very far behind the American and the Continentals - one might even say 10 years. However, more about that later, we're digressing from the point.

Back in 1942 experiments were carried out with extremely light sailplanes: incorporating single sur-faced planes and no weight box! The wing was merely set far enough back for the nose of the model to obtain correct balance. The models were found to be unsuccessful - towline launching was almost an impossibility - and were blown about, in even a slight breeze, like so much chaff!

Heavier models were therefore constructed and at once proved more successful. Long fuselages - giving long moment arms - of small cross sectional area were found to be a definite advantage. Stability was greatly improved, as well as performance. Parasol mainplanes, giving a more undisturbed airflow over the wing section were another improvement. Naturally problems arose, one of the greatest being rigidity. No one will disagree when it is stated that nothing can upset the stability of the model more than flexibility of the lifting surfaces and rudder surfaces. The use of long and small cross-sectional area fuselages brings about flexibility and double cross-grained tissue covering was introduced as a remedy. Damp weather slackened the tissue, however, and we were back where we started from..."

Quote: Hi Steve, I forward these in case they are of any interest. I have successfully tiled the plan of the Lightweight glider for building as a very light wind slope soarer. Regards, Andrew"

Update 13/03/2019: Replaced this plan with a clearer copy (patterned background removed) thanks to TonyP.

If anyone has a copy of this one without the speckled background, I'd love to see it, thanks.
SteveWMD - 19/03/2013
Add a comment