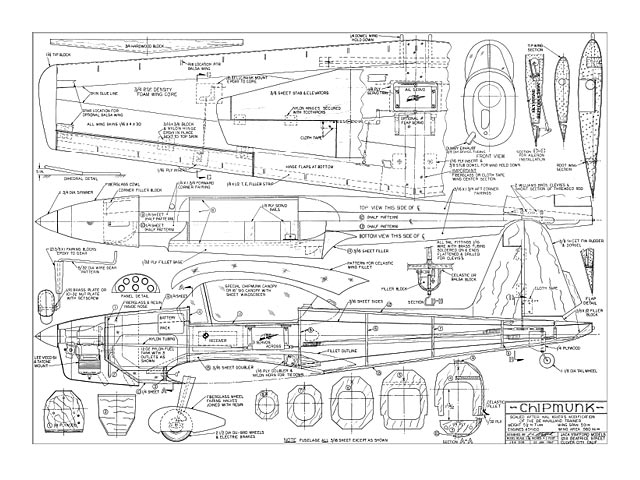 Quote: "Mr De Havilland's Chipmunk is a winner as a full scale acrobatic aircraft and is a double winner as a radio control plane - double as it will win for you as a pattern machine as well as in scale. Chipmunk, by Jack Stafford.

Chipmunk was the word in talking to the guys who were lucky enough to participate in the Aero Classics at Palm Springs in 1965. As Jerry Nelson expressed it after the meet - there was an airplane that looked and flew like one of our RC models. Quick, light on its feet, and precision acrobatic, under the capable guidance of Hal Krier. Wouldn't it make an ideal pattern ship? You know how ideas go sometimes, information is hard to come by. Krier's base in Florida is a long way from Southern California so the idea lay dormant until the August 1966 issue of MAN hit the stands and there was a beautiful Planes Worth Modeling 3-view. The moments were good, the fuselage shape was good for cowling an inverted engine, the landing gear was gangly, the ailerons were too small for model work, rudder shape was pretty awful and the canopy was tremendous.

Then one of the troops brought in the August issue of Flying magazine with a write-up on Hal Krier's ship and the modifications he had made. Bigger ailerons, enlarged horizontal tail, fairings and wheel pants, a beautiful new rudder, and a flashy painting scheme. Here was a model that had to be built! With high anticipation, dope cans and spare wings removed from the drafting board and the lead was spread amid daydreams of the perfect Pattern ship that would also be Scale and perhaps a little Open Pylon thrown in for good measure.

The resulting airplane is shown in the accompaning plans and photos. It makes a good-looking scale model alright but it is a little unusual when compared with most Pattern ships in use today. It's small, 59-inch wingspan, only 562 square inches of wing area; is powered by an inverted Lee Veco 61, and utilizes the old tail dragger landing gear configuration. For control, it uses one of the new lightweight proportional systems by Proportional Control Systems, has flaps operated on the fifth channel for more precision in landings.

Flight performances were even better than anticipated. By the time you read this, a pair of Chipmunks should be on their way to Corsica in the capable hands of Cliff Weirick for the International Championships in June. Acrobatic capabilities are good with no nasty flying characteristics apparent and it is considerably slower than anticipated. Really not much faster than the average pattern ship, somewhere in the vicinity of 75 mph in level flight.

I would like to explain some of the ideas behind the unusual aspects of the airplane. First item in question I am sure is the size. Experience with the Comanche (oz8112) indicated that a six-foot scale ship at 8 or 9 pounds was too much airplane for pattern work with a 60. A larger engine was illegal, so the airplane had to be smaller. Plus the fact that we had been flying Goodyear for over a year and the 'Midgets' seemed to have fantastic acrobatic potential. You have to watch a demonstration by someone like Cliff Weirick to appreciate the maneuvers that our present pattern ships can't do, 1000 feet high loops, extended vertical four point rolls, and huge top hats. The racing 40 size engines give the tremendous power-to-weight ratio advantage, but for pattern work the reliability of a 60 was a must, hence the big Veco Lee under the hood. A careful analysis was made of the wing, power loading, moments of inertia, reynolds numbers and drag, and a wingspan of 59 inches was selected. Oh boy! Would you believe that if you multiply the dimensions in MAN's 3-view by 10, you also get a 59-inch wingspan. So much for science.

Next item on the list is a conventional landing gear. The airplane was intended originally for scale work and FAI pattern. They have no ground handling requirements so the conventional landing gear was thought not to cause any problem in this area. As a matter of fact, the airplane has been flown in AMA pattern and probably because there is considerable weight on the tail wheel, we experienced no problem whatever in taxiing in either light winds, medium or heavy cross winds particularly with judicious application of up or down elevator to keep the tail on the ground. Of course, you do have to use a rudder on take-off because once the tail breaks ground, the large rudder tends to weather vane the airplane, but there is enough rudder area to keep it headed in a straight line.

Landings are another matter. The controlled crash of the typical pattern airplane of course is out, particularly with the addition of flaps, 3-point landings aren't too much of a problem and beautiful wheel landings are possible for a touch-and-go manuever. And inverted engine is a little more critical to start than the average side winder or upright installation but it does offer the advantage of better heat control under the cowl. Prolonged idle does not seem to cool the engine off, nor prolonged spins. The airplane is small enough so you can quickly flip it over and light it off if you do get it flooded and the plug fully loaded..." 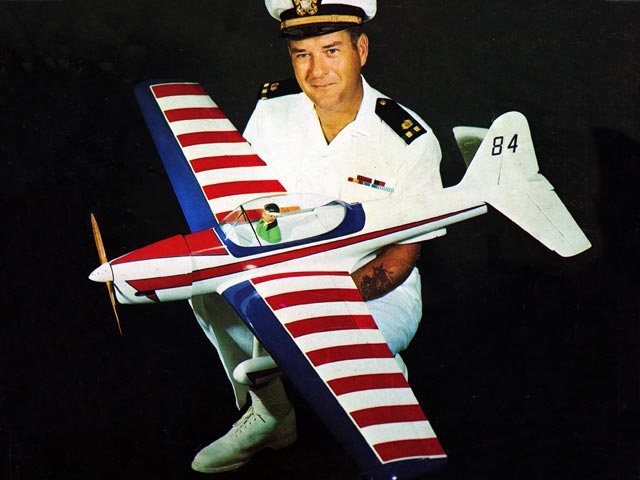