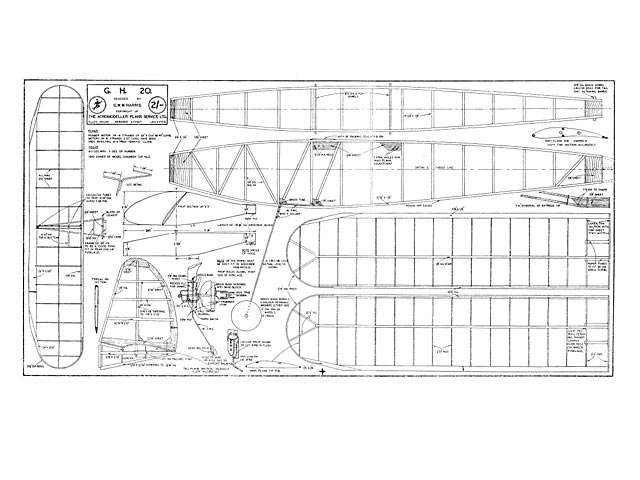 Quote: "THIS machine was designed for duration competitions including those run under Wakefield rules. As will be seen from the drawing it is a simple and straight-forward job, which is an important consideration these difficult days. it is, however, strong and reliable.

The original model was first flown in 1942, when it was entered in some local competitions, where it won the Midwood Challenge Cup and Farnborough Trophy.

Owing to the local club temporarily ceasing operations, I decided to try my luck with GH.20 at Epsom in Blackheath's Gala Day. It won first place in the open duration event. This win spurred me on to have a try at a National Competition, so I entered the 1943 ME No.2 Cup competition; this it won with two flights, the second was OOS..

It is not, I think, necessary to describe the model in detail since its construction follows orthodox practice. The following remarks may help anyone desirous of building it.

1. The machine will fly in pretty foul weather, so it is worth double covering the fuselage, also use a good quality dope.
2. The tail plane ribs are slightly cambered, so you must stick the covering to the ribs, underside only, of course.
3. A small amount of flight trimming can be done by inserting narrow strips of paper between the tail unit plug and the near end of the fuselage.

The Airscrew WP Type: Carve from soft balsa, develop the blade with care from the shaped block. The blade should be as thin as you dare make it towards the tip. Reinforce the leading edge and tip with one or two coats of hard drying cement. Use a non-shrinking dope such as banana oil on the blade, this will avoid the possibility of distorting the blade. If the hinge arms are made sufficiently flexibte, it is possible to get a variable pitch action, within certain limits, of course. The blade assuming its maximum angle, ie coarse pitch position at the beginning of the flight, then returning back, progressively to its original position (fully fine) as the torque diminishes.

Stops to prevent the blade reaching excessive angles were not found necessary when using motors consisting of 14 or 16 strands of 1/4 in by 1/24 in black rubber.

This flexibly-mounted blade . type of airscrew has proved itself to be well worth further experiment. I have made repeated tests with this particular airscrew in comparison with my fixed pitch types, and I am sure it is superior, inasmuch as the model continues to climb where before, with a fixed airscrew, it would have levelled out.

In conclusion, I would add that I quite realise the limitations of the airscrew described, but I do regard it as a step in the right direction. "

Quote: "This time we go to the June 1944 AEROMODELLER where another delightfully atmospheric C.RUPERT MOORE cover painting shows the G.H.20 Wakefield in full flight high above, in England’s wartime skies... to the model on the cover the G.H. 20 WAKEFIELD that first flew in 1942. Designer G.W.W. HARRIS said 'It is a simple and straightforward job that is both strong and reliable'. It has already won local competitions." 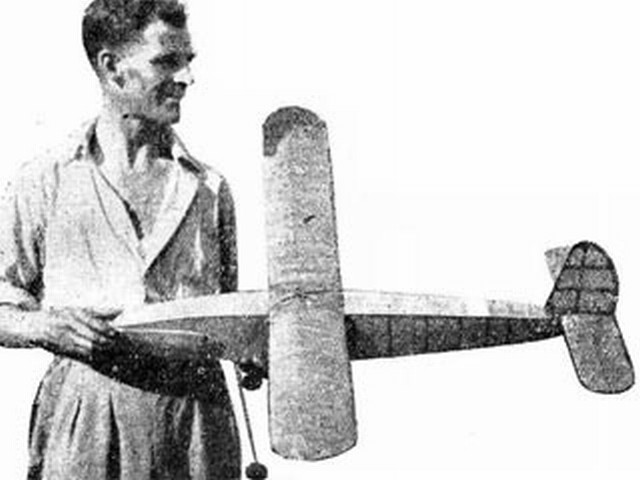