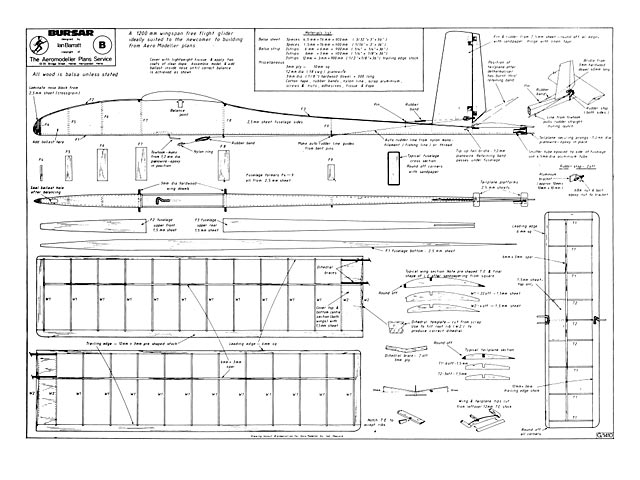 Quote: "A Simple to Build Glider That Has a Performance Good Enough to Require Auto-rudder and a De-thermaliser. Bursar, by Ian Barrett.

THE PREVIOUS ARTICLES in this series have described the selection of a design and the preparation of a materials list to enable the modeller to construct a model aircraft directly from a plan, without recourse to the purchase of a kit of parts.

As an example of a model suitable to anyone progressing from kit building, we have designed a 'no frills' glider with simple lines, but with a performance good enough to require such devices as an automatic rudder and a de-thermaliser. An effort has been made to give as much information as possible on the plan itself, so that the model can be built by anyone with some previous experience of kits, without having to refer to these notes.

A materials list has been prepared, but before rushing out to buy the lot, take a look in your scrap box to see whether you already have some of the material available. For example, the wire required for the tow hook and auto-rudder parts is minimal, but would require the purchase of a 915 mm (36in.) length. You might even get away with using paper clip wire, although this is rather too weak for the tow hook itself.

Your building board should ideally be long enough to support the full length of the fuselage, ie about 950 mm (38 in), but a shorter one is acceptable providing it will take one wing panel, 600 mm long (24 in). The fuselage can always be built 'in the air', that is, assembled without having to pin it to the plan. Notice that the design is based on standard balsa-wood lengths of 915 mm (36 in.), so that, for instance, single strips are used for wing spars and leading and trailing edges. Similarly, the sheet sides of the fuselage can be cut from single sheets. Direction of the wood grain is indicated too; the fin is cut with the grain vertical, and can be cut from standard sheet.

Construction. Ready to start? Let us begin with the fuselage. The first task is to transfer the outline of the fuselage sides to two pieces of sheet balsa of the correct thickness. There are several ways of doing this, some of which are less damaging to the plan than others.

If you have a large enough piece of tracing paper, the outline can be traced onto it using a medium hardness pencil. Remove the tracing paper and turn it over, then position it on the sheet balsa. Note that one edge of the balsa can become the long straight bottom edge of the fuselage. Draw over the outline again with pencil, and a faint imprint of pencil lead will be transferred to the wood. The first side can now be cut out, and used as a template for the other sidepiece.

An alternative method of transferring the outline to the wood is to use carbon paper under the plan and over the wood; you may experience difficulty in aligning the bottom of the fuselage outline with the edge of the wood because you are working blind.

A third method is to prick through the plan with a pin, so putting a series of small holes into the wood, which can be joined up when cutting out. Both these latter methods can spoil the plan somewhat, particularly the last, as a large hole can appear in your plan if the perforations are too close together..."

Quote: "This time moving to the March 1981 AEROMODELLER... IAN BARRETT'S Flying High is the first build article and plan feature. BURSAR is a simple 'no-frills' tow line glider but one capable of a good performance. So much so it needs the automatic rudder and dethermalizer. It also looks nice. The article gives all the relevant information." 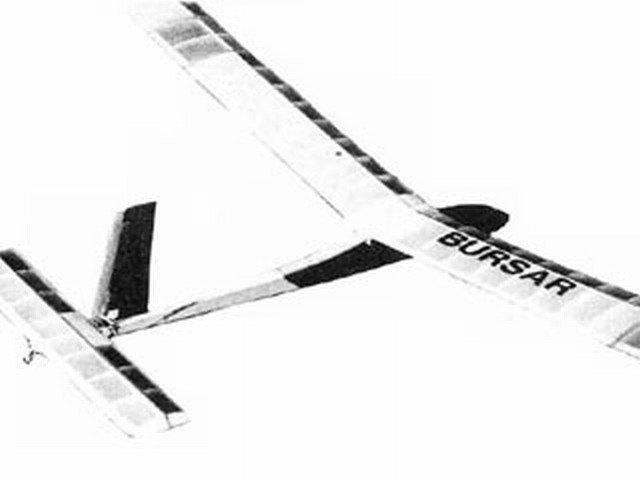