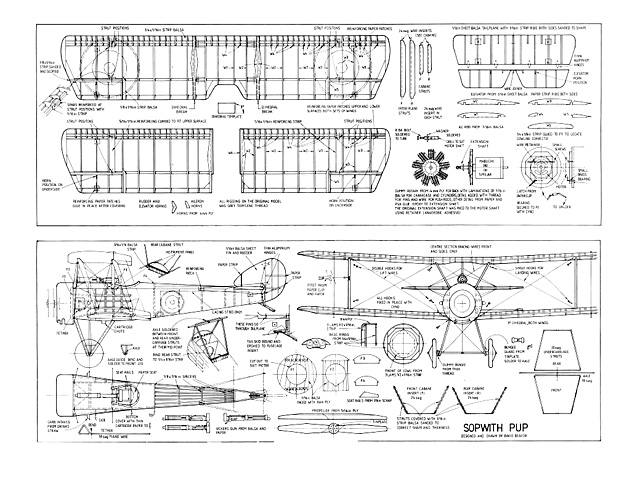 We first saw this splendid model at the Model Engineer Exhibition where David flew it as part of the RTP demonstration put on by his ATC Squadron from Huntingdon.

Renowned as one of the finest scouts of WWI the Pup was, during 1916-1917, the only British plane that could take on the more powerful German Albatros. During its service career it was used by the Royal Navy for aircraft carrier trials, and by both the RFC and RAF as a fighter, night fighter, and trainer. Details of a typical Pup can be obtained at RAF Museum. Hendon. The Shuttleworth 'Pup', although a converted Dove, is also useful but there are differences in the rigging, struts, and cowling.

My model is powered by a Mabuchi 380, 12 volt electric motor driving a scale rotary engine and propeller, a combination that works extremely well. Construction is quite straight forward and, with the exception of the wing spars of hard 1/8 in sq balsa, the whole model can be built from 1/16 sheet balsa and small pieces of 1/32 ply.

Fuselage. Cut out the fuselage sides and farmers, face F1 and F2 with 1/32 ply and allow to dry. To stop the fuselage from bowing. 1/16 square strips are glued to the insides at scale positions. Drill F1 for binding the centre section struts and undercarriage. Curve the fuselage sides to conform to the plan outline and make up spacers. Starting from the front of the fuselage, glue the spacers and formers into position allowing the front and centre ones to dry before going on.

With all the spacers in place, the rear stringers can be fitted and sanded to shape. The side stringers are glued to the outside of the front fuselage and dummy formers glued between. Sand to shape. 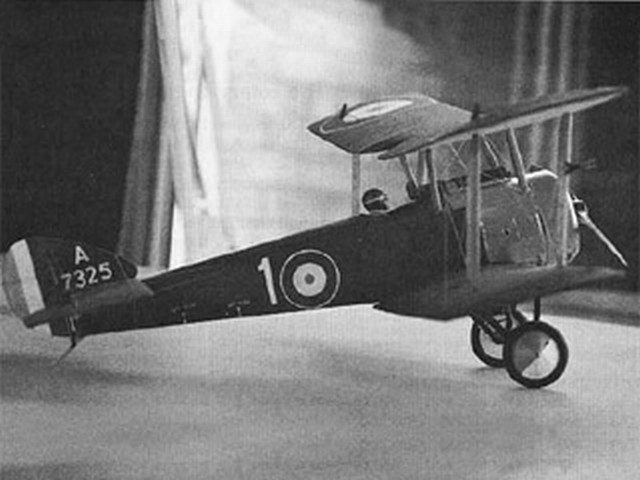