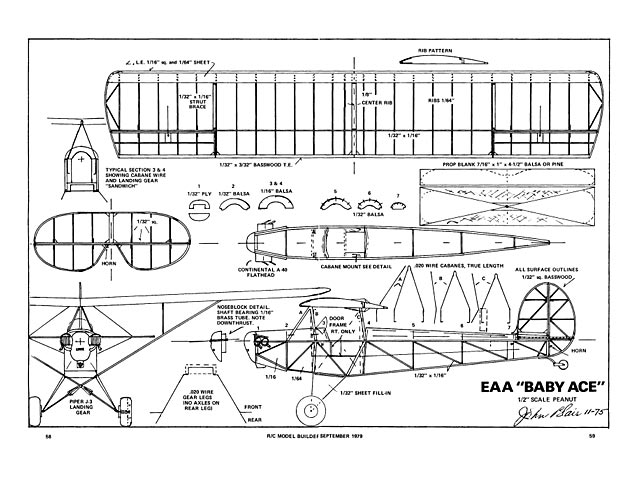 Quote: "This plan is presented as a stick-for-stick exact scale model, from drawings in the October 1973 Mechanix Illustrated. Built as shown, the model will be reasonably light (about 1/2oz) and will fly well."

Quote: "The Baby Ace is without a doubt one of the most popular homebuilts around, and makes an attractive and good-flying Peanut. Scale documentation is as close as the nearest airport.

From Demoiselle through Pietenpol to EAA Baby Ace, the parasol monoplane has consistently been one of our most successful aircraft types. The Baby Ace itself is a development of the earlier homebuilt Corben Ace designs of the thirties. What modeler over forty doesn't remember his twenty-five cent, kit-built Corben Super Ace?

This plan is presented as a stick-for-stick, exact scale model, from drawings in the October 1973 Mechanix illustrated. Built as shown, the model will be reasonably light (about 1/2 oz) and will fly well. If you want to go for maximum endurance, the structure can easily be simplified to bring the weight nearer to 1/4 oz.

Begin by preparing some non-stock wood. With a balsa stripper or a good straightedge and your trusty Uber Skiver, cut some 1/32 x 1/16 balsa for fuselage structure and wing spars. Wing struts are 1/32 x 1/8 balsa, 1/32 sq balsa is used for tail structures, 1/32 x 3/32 soft balsa is used to fair the cabane wires, 1/32 x 3/32 rock-hard balsa or basswood is needed for wing trailing edges, and 1/32 sq basswood is used for tail surface outlines and wingtip bows. (Hint: a ready source of basswood is the wooden coffee stirrers provided at snack bars.) Secure or sand down some 1/64 sheet for leading edge sheeting (if used) and wing ribs. Turtle deck and side stringers may be either 1/32 x 1/16 balsa or 1/64 sq. bamboo slivers. The bamboo looks more 'in scale.'

Since construction is quite conventional, we will concentrate on features. First, you will find that working with tiny Peanut structures requires a good pair of bent-nose tweezers. As the fuselage box is assembled from the tailpost forward, put a temporary crosspiece in the bottom between stations 3 and 4. This will make installation of the landing gear easier, and will be removed later. Note that uprights at stations 3 and 4 are 1/16 sq. Bend the landing gear wires over the diagram and sandwich between two pieces of 1/32 sheet. Bend and sandwich the cabane wires in the same manner. Referring to the 'typical section' shown on the plan, install the landing gear legs and cabanes in their proper positions. The front and rear gear legs, and cabanes 'a' and 'b,' may now be epoxied or soldered together. The cabane wires are faired with soft 1/32 x 3/32 balsa. The landing gear is filled in with 1/32 sheet balsa. Sheeting the fuselage nose and adding turtle deck stringers completes this assembly.

Trying to produce 'in scale' appearing structures, I have progressed from clumsy, cut-out sheet outlines through laminated balsa (and even smaller-section laminated basswood) to my present practice: a single piece of 1/32 sq basswood. A stab or rudder outline wet-formed from 1/32 sq basswood is plenty strong enough and looks really good on a Peanut model. With 1/32 sq spars and ribs (or 1/64 x 1/32) a lovely, light unit results which can feature scale spacing without an undue weight penalty. Care in tissue shrinking and the use of plasticized dope is advised, however.

Make cardboard forms for bending the outlines. Fifteen minutes soaking in hot water will soften the basswood so that it may be stretched around the forms without breaking. Lace the wood to the form with rubber bands and bake for an hour in a 200-degree oven. The tail surfaces may then be assembled directly over the plan. Soft wire hinges make all control surfaces movable. (The outlines are cut after the units are covered and doped.)

The exact scale wing is not complicated, it's just that the pieces are tiny. Make two 1/8 sheet center ribs. The extra rib is used as a template while cutting the 1/64 ribs by the 'stack' method, and is then discarded..." 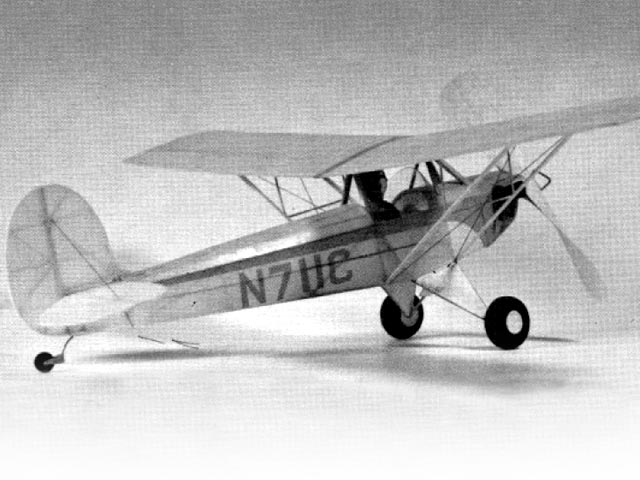