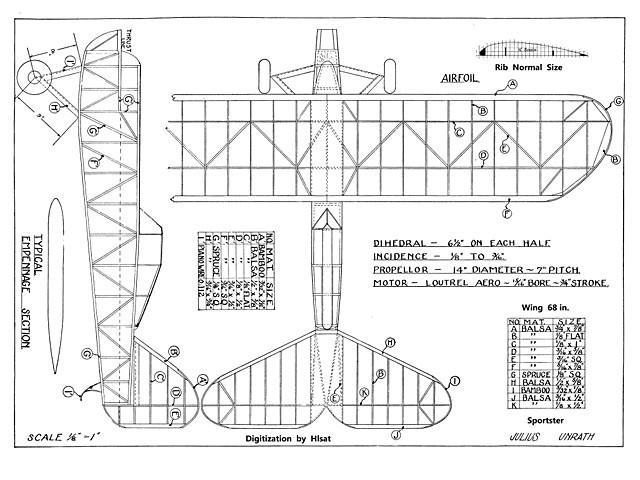 Quote: "The Sportster Gas Model. Plans and Suggestions That Will Enable You to Build a Simple But Fine Flying Gas Engine. Duplicated from the original drawings and data through the courtesy of Louis P Loutrel.

THIS model was test-flown in Van Cortlandt Park, New York, in April, 1933. When we reached the field it was fairly-calm but had started to rain. By the time everything was in readiness, the model was 'plenty wet.' However, we decided to fly it or bust ( the model). Just then it was suggested that I adjust the rudder so that the model would circle. I was sorry later that I hadn't used a little thought before setting that rudder.

The motor started easily and we released the model with a prayer on our lips. After bouncing over the ground for about fifty feet the model started to lift. When it reached an altitude of six inches a gust of wind got under the wing and lifted the model to about twenty feet. At that altitude it started to 'sizzle' around in an honest-to-goodness vertical bank. Right then and there I thanked my lucky stars that I had used the small rudder.

If it hadn't been for that, the rudder would have caused the model to flip over on its side and dive into the ground. As it was it came clown a little too fast for comfort. It made a three point landing (a wing tip, one wheel and stabilizer tip) which nearly caused our collapse. After almost having his nose cut off by the propeller, my 'grease-monkey' cut the switch. Inventory of the damage amounted to a very dirty and muddy wing tip and a splintered landing gear fairing. The Sportster was again adjusted, this time with the rudder straight for we realized that the torque would cause the model to circle. The model then made its first successful flight; four minutes with 3/16 oz of gas.

After being completely recovered and fitted with air wheels the Sportster was taken to the Eastern States meet at Hadley field. Here we learned the model circled on the take-off - which caused it to fly into the crowd that gathered around the runway. One of the enthusiasts sat or jumped (I couldn't tell which) on the model and tore half the cabin away and about a square foot of paper off the wing. In spite of this, we carried the model to the roadway, called a timer and with 1/2 oz of gas in the tank, released the Sportster on its longest flight to date. The motor cut out about five minutes after the take-off. Thirteen minutes and fifty seconds later after following the model in a car, we saw it land safely in front of a farmhouse.

That day the Sportster was flown more than a dozen times without the slightest damage from flying it. The average "take off" distance is about six feet..."

Note: Known variously as the "Loutrel Sportster" and "GHQ Sportster" this is a design by Julis Unrath. Loutrel and GHQ were both brands of ingnition model engine. 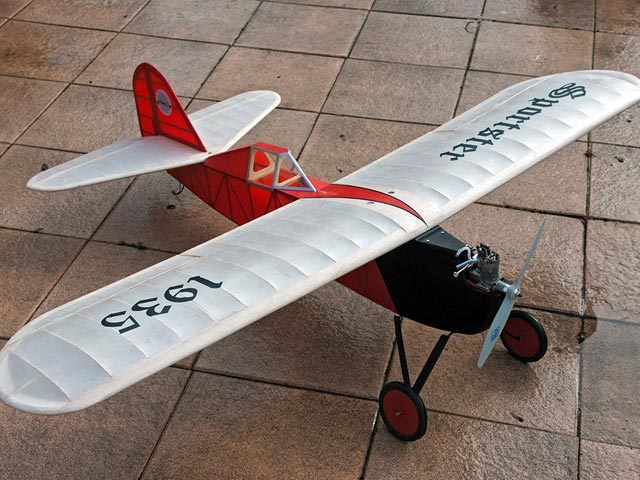