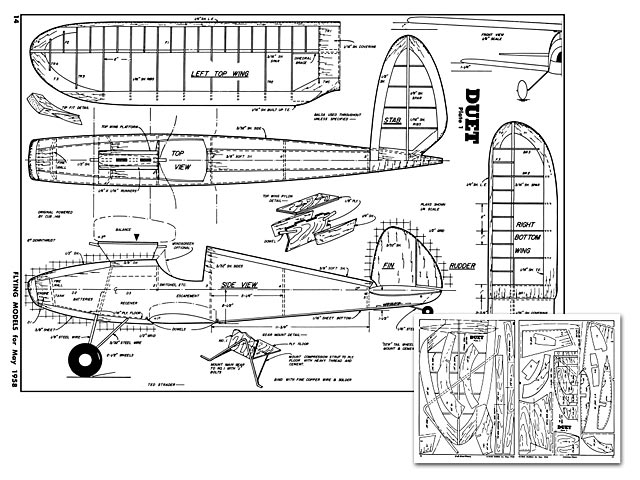 Duet. Radio control sports model for single channel by Ted Strader. 46in wingspan biplane for .15 power. From Flying Models, May 1958.

Quote: "Some want high wings, mid-wings, low wings. This one is for fans who prefer two wings and R/C single-channel rigs.

If such a thing is cricket we'd like to dedicate this plane to the many modelers around the world who liked the pictures enough to inquire about plans. One or two letters along this line is not unusual, but it began to look like a lobby had been formed for the Duet. Our only hope is that the model fulfills your expectations.

The Duet was designed primarily because we happen to be one of the countless who genuinely like bipes. But, we wanted a stable model. A bipe doesn't always fill these requirements. A close inspection of the plans and dimensions will reveal a layout more for a high wing monoplane than a biplane, and yet we feel the individuality of the biplane has been retained.

The chord is average for a plane of this size if the top wing was average length as compared to fuselage length. But the top wing is about 6 in longer than what we consider average which gave us the stability we were seeking. The model can be sustained in flight by the top wing alone which means that the bottom wing lift is gravy.

All in all, we arrived at the goal set. A biplane that looks like a real ship with the stability of a high wing. And, stable it is. On the first flight it was tail heavy. Instead of rolling over or trying to loop it flew (mushed) out the entire flight with its tail dragging. With this remedied, we settled down to the serious business of enjoying the sight of a bipe in controlled flight.

Construction. Very little scaling is necessary to build the Duet. A couple of pieces of tracing paper, a straight edge, sharp pencil and a ruler should do the trick. Both wings will require only a minimum of effort to affect a working plan. One half of the stabilizer outline is included in the full-size drawings to aid in this department. The grids on the rudder make short work of this, so all we have to worry about is the fuselage side outline. And, this should take very little time.

By laying the 3/32 sheet doublers in their relative positions, along either the seam line of two 3 in sheets, or a reference line drawn on 6 in stock, and allowing for the corresponding bulkhead thickness, the forward section is about completed. The only other critical measurements are the distance to the stabilizer leading edge and its attitude. With the bottom half of the fuselage correct, and by using the tops of the fuselage bulkheads as guides, the top half arrives at its own conclusion..." 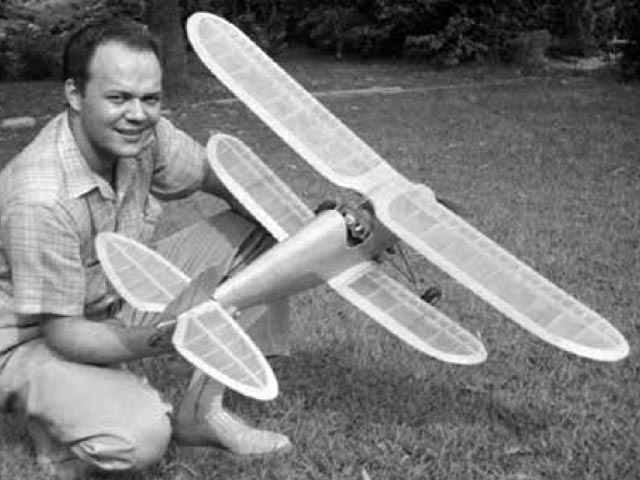