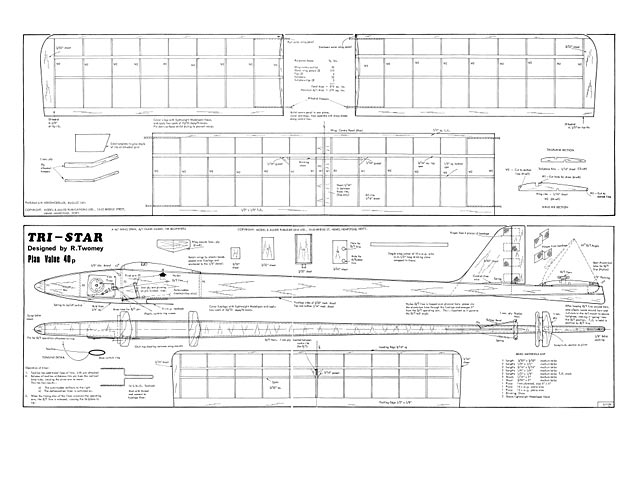 Quote: "Your free plan. A/1 glider for the novice modeller. Tri-Star, by Dick Twomey.

TRI-STAR is a true beginner's sailplane, yet it is designed to meet the International A/1 Glider specification, and is both straightforward to build and satisfying to fly. The plan was drawn up over the Christmas '70 period for the designer's three young sons, ages varying from 8-11 years, each of whom managed to produce a reasonable replica (with just a little assistance) in time for the Crookham Contest Modellers meeting during March - the first event of the year.

The notorious postal strike of that period (of all things!) made its presence felt at this contest as three clockwork D/T timers which had been ordered failed to materialise, and young Christopher Twomey (eight years old) lost his Tri-Star in his first ever contest flight. He was 'unlucky' enough to catch a big 'Chobham bump', and the model disappeared at quite an altitude after being watched for some 15 minutes!

Construction has deliberately been kept as simple as possible, and the only tricky bits are the dethermaliser (D/T) and auto-rudder (A/R) fittings, with which some parental help may be appreciated. A PVA glue is recommended for all balsa joints, while an epoxy adhesive was used for all balsa/ply joints, and also for securing all metal tubes, etc.

First, cut out the two fuselage sides from 3/32 in sheet followed by formers F1-4. Pin the formers to the plan view of the fuselage, and glue them to the sheet sides. When dry, join at the tail end with a piece of 1/8 in sheet, and add the nose block. The top 1/16 in sheeting may now be added (cross-grained), with the exception of the wing position, but leave the bottom until after the fin and rudder plus the A/R and D/T lines are in place.

Note the small piece of curved aluminium tube which takes the D/T line behind the tailplane. and the brass tube (left side of fuselage just inside the sheet side) which will hold the timer release pin which is attached to the towline. Note also the horizontally-placed (across the fuselage) aluminium tube which serves to pivot the tinier operating arm (marked `P' on the plan), which with the timer itself, is mounted on the left-hand side of the fuselage..." 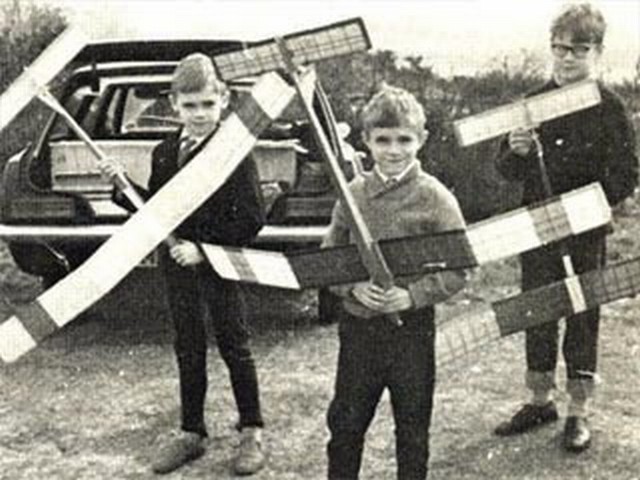