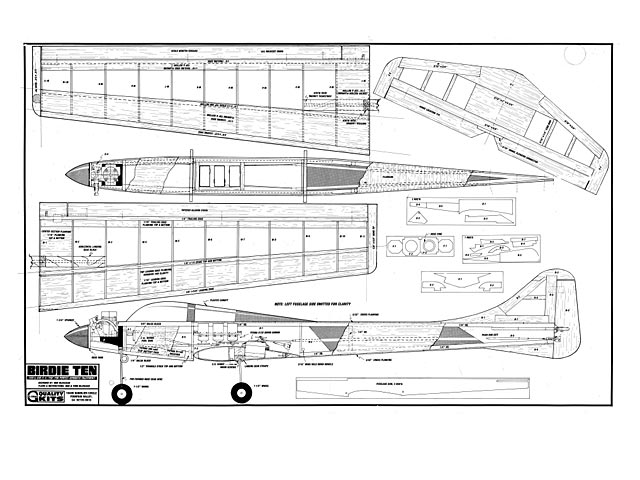 Quote: "A great little pattern plane. A Global (Hobby Shack) kit last seen a couple decades ago. I scanned my original plans, but the one attached was posted to RCUniverse at http://www.rcuniverse.com/forum/m_10577153/tm.htm and is better than mine so I am sending it instead."

Quote: "RM Review: Take a sleek F3A aerobatic model from the 1970s and sprinkle with shrink-dust. The result would look very like this little 49 in span beauty from Global kits. Review by Dereck Woodward.

What's a 'Birdie 10'? The answer lies in the history of American pattern models with a design called Dirty Birdy (oz4915) - a model with a skinny fuselage, long tail moment, tapered low wing and trike gear. The designer's name escapes me [Joe Bridi, of course] but the Dirty Birdie was a good competition and sports model. Why not? Aerobatic models were once quite simple! Birdie 10 is a 'large scale' model of the design from long established American 'Global Kits', now available here thanks to Ripmax.

Global Kits range from .049 to .40 designs, gliders and electrics. Aimed at being good value for money, they are not too expensive, even after being ravaged by such as Custard and Exercise! Now you know a little background - to business.

Birdie 10 spans 49 in for 300 square inches and takes a 10 or 15. A lot of model for a little engine? Perhaps, but she's slender with a high wing of semi-symmetrical section. That amounts to a reasonable size for a 10, a larger engine would make her look ungainly.

Board meeting: There's a lot of wood in the box and all proved adequate for its task. The plan is superb, one rolled sheet on a plastic-like material complemented by an instruction booklet, with 'tick boxes' to check off construction stages. Where operations are duplicated (wings, for example), two boxes are provided. For the fanatic instruction follower, start at the beginning, glue 'A' to 'B' as told, tick the boxes to keep your place and Robert is pater's brother (or Bob's your uncle, as we say up North in civilisation). Did I follow them? Of course!

On the wing: A tapered wing means all those rib things are different. The diecutting is fair, the rib numbers are stamped into the wood rather than printed. The number stamp is shallower than the shape cutter, so the ribs don't develop funny holes. The numbers are clear enough, no problems there. I made no attempt to trim the ribs, instead I pinned the spars to the drawing and added ribs, to find a few 'shorties'. Nothing too drastic and all other wing components matched up just fine.

The wing section is tied in with the build sequence, so that the correct washout is locked in by the 'D' box construction. There is a good reason for reading the instructions after all. The wing appears good mannered at this stage, but I wouldn't leave out the wash-in.

Now to join the panels. I couldn't find any note of the dihedral but the UC beam is a hefty piece of hardwood with the dihedral angle machined into its lower face. So I jigged the panels to the UC beam, checked the fits and glued it up. Well, it looked right!

Fuselage: Never mind the instructions, I always ponder on the radio space before waving my magic cyano wand over the fuselage. The plan shows a 500mA nicad pack under the fuel tank, followed by a Futaba micro Rx. Three fuselage mounted servos control rudder, elevator and throttle, a wing mounted servo operates the aileron torque rods.

Fine, but my micro Rx died recently when the port wing on an electric job left in flight. The cost of a cheap model rocketed and I'm down to standard receivers. So my battery is up front, the Rx is eased gently in just behind F2 and four micro servos manage to avoid interfering with each other's business.

Apart from that, the fuselage went together fast. Why not? It's a conventional long, skinny fuselage. The only difference to English eyes is 1/8 liteply doublers rather than the thinner ply we tend to use.

A long way behind the wing: Comes a built-up tailplane and top fin, sheet control surfaces and sub fin. I didn't like the kit's instructions to finish and cover the fuselage, remove strips of covering and butt joint the fins to the revealed wood. Even if strong enough for flight, one attack of 'hangar rash' and one fin or t'other would be off. So I notched the sub fin right through the bottom sheet and added some 14in triangular strip gussets to hold up the top fin. Better safe than sorry - my clubmates will attest to how much sideways my models can end up.

Covering: I used Solarfilm, it's the lightest and quickest available and long may it continue so. No chance of getting Solartrim, with the country in Xmas paralysis, so Solarfilm Solvent and trim stripes of film were used instead.

Bits and pieces: The photo shows my R/C fit, my rearrangement is no reflection on the kit as there are too many variables for the makers to give more than suggestions. I found her to be nose heavy, so swapped the 500mAh for a 250. Incidentally, their way, a 500 nicad goes in during assembly and becomes a fixture.

The nicad sits under the best match I could find for the 2 oz tank shown on the drawing, puts the CG slightly ahead and allows my only spare Rx - a vast older type Futaba job - to join in. So I cheated - but Birdie's radio bay is far bigger than it seemed. I used micro servos, but 'minis' would fit and a modern Rx would fit easily.

I used Goldberg Gold-N Rods, not supplied, to drive elevator and rudder and a bowden cable on throttle. Overall, the kit's hardware package is reasonable in quality but odd in composition. The steerable noseleg is there but the fuel tank, even more essential, isn't.

The U/C is a trike gear set-up; main gear placement and anchorage looks good for the steerable nosewheel. The 'bearings' are holes in the supplied engine mount; this fitted my Magnum and OS 10s. If you feel a need for speed, the mount would take an OS 15 with surgery - any wider and you'll need to find a wider mount.

Now my log book tells me that this is only my fourth trike geared model in twelve-odd years of RC'ing. If you'd flown from the fields I have, you'd know why. However, you have to stay with it for reviews, so in goes the funny three wheel set up. Will those tiny wheels even move on the Sandchurch patch?

Should soon find out, but I draw the line at an unsprung noseleg pushrod as the plan suggests! Futaba 133 servos are magnificent, but the shocks of an unrelieved steerable noseleg would be too much. So, I lock up the noseleg with the steering tiller.

Freezing fog for days is not good for testing, but then it cleared for a spell of calm days and blue skies, ideal as testing conditions. Will those 1-1/2in wheels turn? Pick a patch of shorter grass and we're off. The nose leg must be set right as she tracks true, I also find that a gentle squeeze of rudder will steer her once under way. A pull 'up' and she's airborne.

A need for up trim suggests nose heaviness, otherwise she flies well. Into the test profile as it's obvious this is a well mannered sports model. The stall is a non-event, roll is smart and precise. Pitch is heavy - needs a more rearward CG - and rudder gives slight yaw-roll couple. In one flight Birdie 10 and I become firm friends.

Cuban 8s - no problem. Four point rolls, great. Outside loops are bigger than insides with that semi-symmetrical section. With her nose heavy balance, the nearest I can get to a stall is straight ahead and the spin/snap corner of the envelope is a way off yet.

She will 'do the book', though long verticals make her breathless, but is that all I can find? Guess it is. The 10 powered 33 oz model is behaving like a much bigger model. So, a few overshoots and circuits to get the feel of things.

The Magnum requires a really low throttle setting for Birdie to descend smartly, a sure sign of adequate power, so there's ample throttle control to manage the descent rate. Over the strip, back to idle and flair the mains into the grass, nosewheel following. I open the throttle, let her accelerate, then lift off again for a climb to height. When the fuel runs out, she proves equally docile deadstick.

Later I explore her ability to perform in a tight space. My patch's runway area is only some 100 yards by 50 yards wide and Birdie 10 easily handled a turnround, manoeuvre, turnround sequence within those boundaries. The Magnum with a 7 x 4 is very quiet, so this combination could offer much to the modeller looking for a small field combination.

Summary: For the price, a good kit, but 'Birdie 10' is produced in Mexico so don't expect it to be quite like more expensive 'real' American kits. It fills a niche in small models, between powered glider and the extrovert fun fly types.

The cost of the kit and a new '10' is little above that of a new '40' engine alone which makes this worth considering for the competent modeller who wants to try small R/C or even for the convert who wants a really smooth performer.

Not for the modeller expecting instant gratification though - there is a fair amount of traditional building, which I freely admit to enjoying! All in all, a delightful little model, great fun to fly and well worth having."

Review.
Wing ribs, thanks to dfritzke. 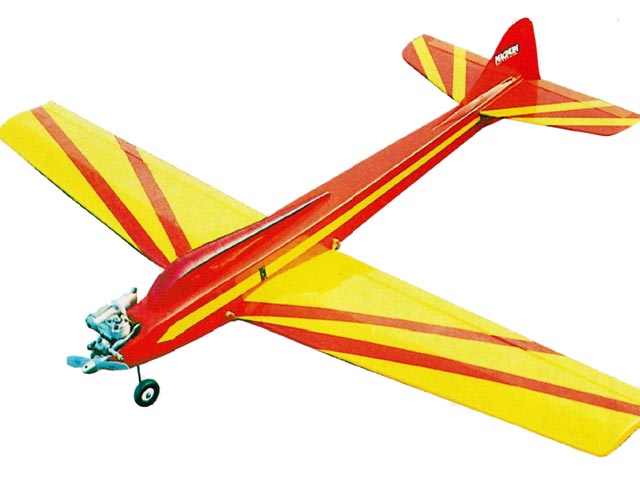