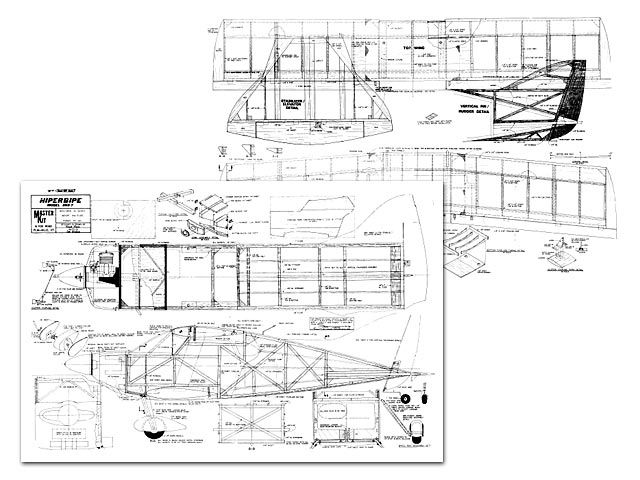 My fascination with the Hiperbipe began when I first spotted it on the cover of Sport Flying Magazine, Vol. 10, No. 1, Spring 1976. The cover of this magazine had a very attractive view of this most unusual biplane performing seemingly effortless knife-edge flight. It was quite an impressive photo and very much characterized the hearty insatiable aerobatic appetite of this out-of-the-ordi-nary negative stagger wing ship. As the article was carefully read and re-read, a realization emerged that the magazine's editorial staff was highly impressed with this homebuilt. Not only was the article comprehensive but complete with extensive photos and three views.

From some angles the Hiperbipe is most unpleasing and could be considered ugly. However, from others it is unusual, and from a preferred few there can be no equal to its beauty. After one looks at this short coupled, wide bodied, two winged wonder for any length of time, many of the seemingly unpleasant views disappear. (This is due to the phenomenon called angular selection.) It is then that the true functionality of the aircraft's design becomes increasingly apparent.

The Sorrell family, who originated the Hiperbipe, did extensive design research along with trial and error building of several biplanes to arrive at the Hiper's final configuration. The SNS6 (Sorrell Negative Stagger 6th version) is the culminating result of all their hard work and devotion to achieving one of the most classy, acrobatic, daringly different designed homebuilts to date.

From actual air show spectator comments and written magazine coverage of the air show circuit, one would have to agree that Mark Sorrell (air show pilot of SNS6) does such wondrous maneuvers with the Hiperbipe that the performance leaves the crowds awe-struck and in absolute amazement at the ship's aerobatic capabilities. The more one looks at this 'chubby-stubby' the more one has the Feeling that the ship started out as an abandoned wing of which a slice was taken at the thickest airfoiled section. As an afterthought, the wings were added for stability. Actually, this idea is not so farfetched, for the original design was that of an airfoiled fuselage that had the windshield extended to the spinner to achieve this airfoiled shape. Due to engine heat and the hot sun on all that expanse of plexiglass the present windshield shape was arrived at. All in all, the design is very successful and it was this success that inspired me to immitate this very attractive ship in model form. Beauty is in the eye of the beholder and, to me, this ship is pure in aesthetics and aerodynamics.

I had been searching for a 'sport scale' subject and wanted one that would be unique yet allow conventional building techniques at the same time, This ship cer-tainly fits that bill. Some basic design considerations were foremost to me and these were initiated in the actual model construction. As a first step, the parameters were established and then the plans were drawn as close to these as a built-up model would allow. The following are the guidelines that the model centered around:

(1) Engines from .40 to .45 size.
(2) Weight 4-1/2 to 5-1/2 lb.
(3) Construction basic and straight forward for the average modeler.
(4) Wing alignment consistent each time the wings were bolted on.
(5) As accurate an outline as possible would be maintained without sacrifice to structural integrity.
(6) Documentation and three views had to be easily obtainable.
(7) Ample radio space.
(8) Wing loading of 18 oz sq/ft at 4-1/2 lb.

A prototype was built and many fine points were learned about the aerodynamics of the negative stagger biplane configuration. The resultant plans represent the correct incidences, moments and construction needed for exacting aerobatic flight..." 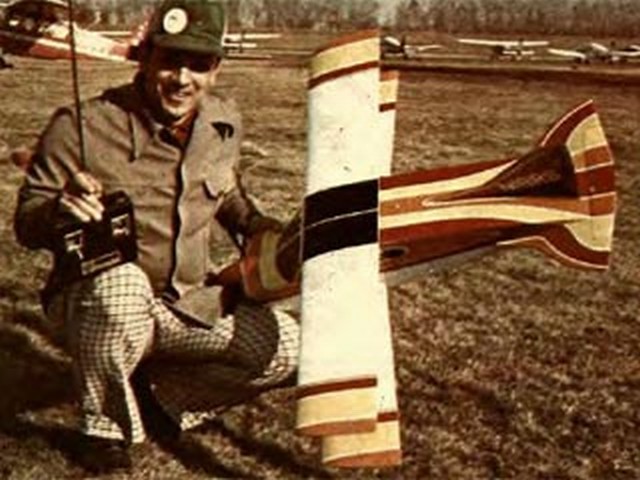