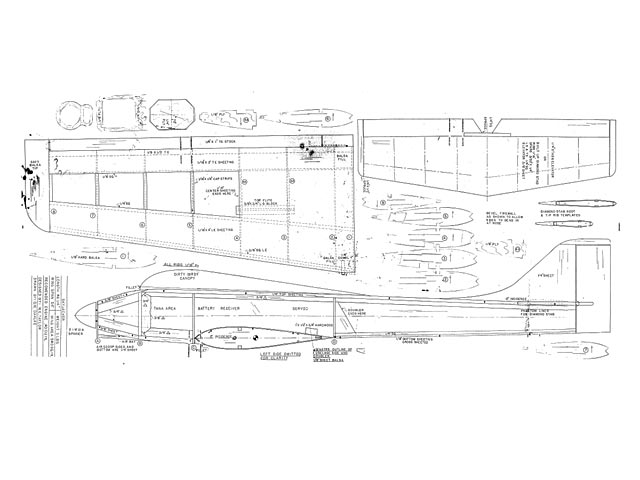 Quote: "After reading many construction articles which begin by telling the reader of all the first place trophies his airplane has won, nothing would be better than to start this story by impressing you with the contents of my trophy case. Unfortunately, I am still hacking around in the Class A pattern and I cannot seem to get above a third place. The creation being discussed here has not even been entered in a contest. However, if you are interested in what I consider a better-than-average .40-size Sunday airplane with good pattern potential, hang in there and keep reading.

Now I should list all of my qualifications in aeronautics, quoting formulas and chapters on theory pertaining to the logic involved in this particular design. Again, breathless reader, you will not find it here.

The name of the airplane should give you the first clue as to how I arrived at this particular design. A skyjacker is someone who steals airplanes, right? This article will show you how to design your very own, scratch built, ultimate airplane, while avoiding any study of theory or any original thought. If nothing else can be said of my building abilities, it must be admitted that I am lazy and take the easy way out. Anyway, when you really think about it, most of our models are built along standard dimensions and very few out-lines, shapes and. configurations have not been tried.

The design of the Skyjacker began about four years ago when I-built a RCM Expert from plans. I liked the basic design and flying qualities; however, while prac-ticing for an upcoming contest, a glitch in the pilot caused the earth to rise up and strike a fatal blow to the airplane.

As I had experienced difficulty with the stall turns, the next version was modified. The horizontal stabilizer was lowered and a larger rudder and sub-fin was used. This seemed to solve the problem and I decided to build a third version with the modifications and a different appearance. All of the basic measurements were transferred to a clean sheet of paper. The various corners were rounded and fillets on the wing and tail surfaces were added. Now, I felt I had an airplane with which to break my third place barrier and perhaps even cause some worry among the world champions.

In this area of the US is a gamebird called a sagehen, which flies like a bat out of h---. It sounded like the perfect name for the new flying machine. So Sagehen it was.

One of these fine machines would not be enough as a back-up is needed for contests. I bought arm loads of balsa and built a matched pair.

OOPS, a design flaw had crept in during the latest version. Almost all of the dihedral had been removed on the theory that it would fly better inverted. Now the wings were hunting for neutral. Boy, does that impress the judges, when, on your 'straight and level flight' you go by flapping your wings. I decided that what it really needed was a swept wing.

About that time someone wrote an article on converting the Sig control-line Chipmunk to Radio Control. I gave up on contest pattern flying, rushed out, bought the kit and started construction. The wing panels were different lengths, so both had to be built on one plan, one of them upside down. Bet you can see it coming, can't you? That's right, I ended up with two panels for one side. Finally some six months later it was finished, complete with retractable landing gear. It flew right off the board as they say. Loads of fun until it came time to land. Throttle back, gear down, nice smooth approach, a little up on the elevator to flair out. What the it's taking off again. The solution was to drop the gear, back off the throttle and then do a complete traffic pattern approach. Then, with a little luck it would lose enough speed and lift to settle back to earth.

After some thought on the matter, I decided that it must be the thick wing. Maybe this was something that the next design needed... " 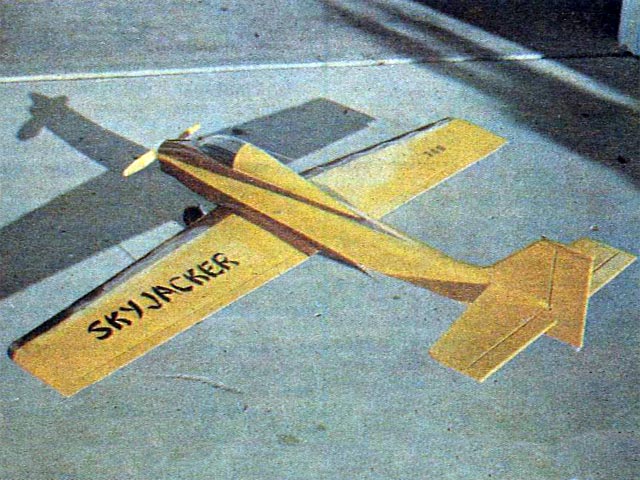