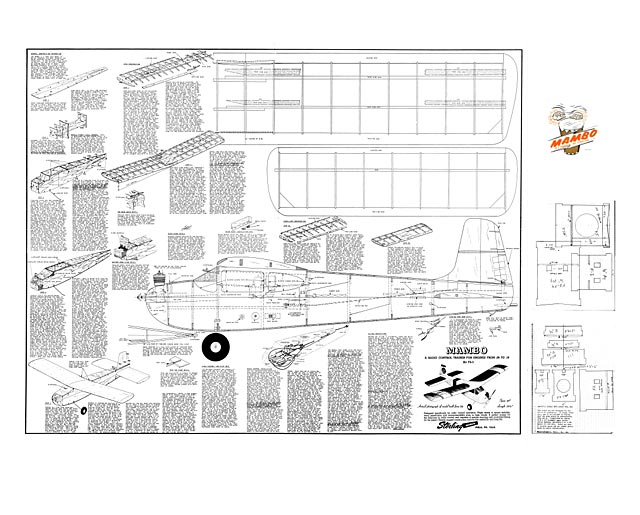 Quote: "Sterling kit FS-3, plan, decal, & bulkheads drawn out from die-cut sheets. Heed the warning about the wing, I have seen a Mambo wing fold in half. You can get rib and stab pattern and all else from the side view. A classic clunky trainer, very easy to fly. Mambo Trainer by Sterling, RC .09-.15 1-3 channels 48in span all balsa and plywood."

Update 20/11/2013: Added a supplement printwood file, showing a tracing of all parts inc ribs, thanks to JJ. 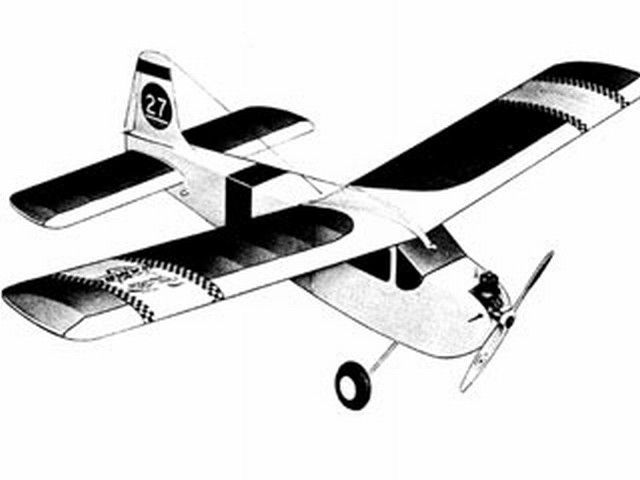 I had a mambo back in the late 1950 it only had a .09 engine and needed a 62 volt battery the radio equipment was called a galaping ghost only a single channel any other radio would put you out of control
neill - 29/04/2015
Early in 1962, me and my buddy, Al Saliba started construction on our first R/C models. Of course we had never seen an R/C model fly, only pictures in the magazines. Al built a Mambo and I chose a Ted Strader design, Easy One with a Cox 049. I bought a transmitter and receiver, while Al bought just a receiver, agreeing to furnish batteries for my transmitter, a not insignificant contribution with vacuum tubes. Both models used escapements for rudder control. There was no concept of "learning to fly", you just went out and did it. All models were test glided off a high bank above the high school stadium, allowing us a few clicks of control before a landing at mid field. Satisfied they both would fly, we headed for the old airport. Al flew his Mambo first, following an expert hand launch by me, whereupon it dove straight into the dirt. Twice. My Easy One was different, flying much better after we added some downthrust to the Cox. Turns out Al's Mambo was tail heavy, gliding perfectly but nosing down under power. Weight in the nose and a shim under the wing made it fly fine on our next outing. But Al's Fox 09 just wasn't enough to get his poor Mambo more than ten feet off the ground. It started easily and ran well, but just wasn't enough power. He replace the 09 with a Fox 15 that was waaaay too much, climbing steeply as long as the engine ran. Al added a second escapement for throttle control to tame the Fox. Rube Goldberg would be proud of Al's rubber toothbrush tip, shoved into the intake by the throttle control. It actually worked, cutting engine speed just enough for cruising flight while allowing lots of power for takeoff. I remember the Mambo wing being kinda weak and I would suggest spruce spars instead of balsa, the wings had a reputation for folding. More dihedral would make it turn better with the tiny rudder, 7" is about right. Hard to believe what we put up with just to fly R/C back in the day....
DougSmith - 30/10/2015
Hi, I built a mambo in the 80s powered with an OS 20 FS, sheeted wing le with cap strips covered with nylon. Strong wing. Great airplane flew couple of years. Found the plans and plan to build another. Was underpowered and a handfull in the wind. have the paterns somewhere and have to dig them out.
Tom Coletta - 21/05/2020
I just finished this Mambo from your plan [pic 005].
David Wartel - 04/09/2020
Here is the Mambo that I built from Outerzone plans [pic 006] for last year's Vintage RC Society theme airplane.
RayS - 12/05/2022
Add a comment