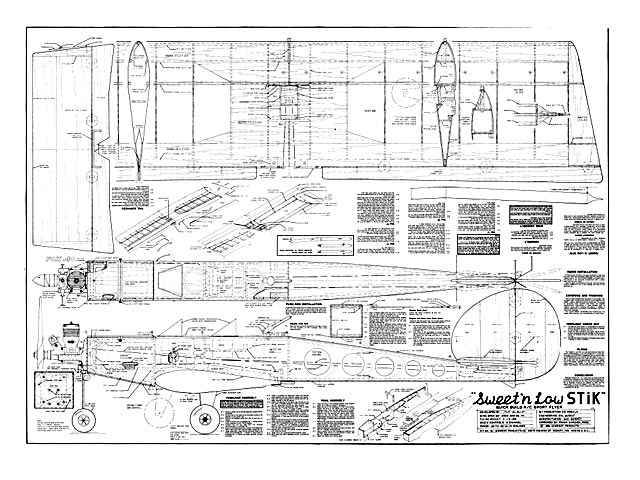 Quote: "Another for ya. Parts not full size, but just as they appeared on the printed insert to identify parts on wood sheets. You may want to scale it up to 'full size'. A variant of the Sweet Stick that was not around very long. Kits are very scarce."

Low wing addition to the Stik family retains the characteristic ease of construction and fine flying traits. For .40 engines.

This product review started out perhaps a little differently than most. An aircraft was needed to test certain new products and ideas. It was necessary that it be .40 powered and of simple construction. It was desired that it be constructed from an available kit rather than scratch-built.

The Sweet ‘N Low Stik by Midwest Products Co, 400 S. Indiana St, Hobart, Indiana 46342, filled the requirements. Specifications include a 54 inch wing span, 600 square inches of wing area and a .29 to .50 cubic inch engine requirement. Construction is a mixture of balsa and plywood with an advertised flying weight of 5-1/2 pounds.

After securing the kit, we dumped the contents on the workbench and started separating the fuselage, wing, and tail parts, making piles for each. Inspection revealed that all the wood was of good quality. The die cutting on the plywood parts was good; however, the balsa parts were only fair with some die crushing evident. The hardware supplied was of good quality and fairly complete. At this point, I honestly believed that I could not put a simila.r plane together from scratch without spending more money than the actual cost of this kit. The plans provided are full size and include notes on construction.

I was very impressed with the basic construction; it was simple and strong, an excellent engineering job by Midwest. Before I go further, I would like to qualify my opinions on the actual construction, etc. Being basically a scratch builder, I am, in general, very critical of kits. I can truthfully say I found very little to fault on the Sweet ‘N Low Stik. Changes were made to suit personal preference and, except as noted, I feel that built as is, it will make a fine aircraft.

Construction: The tail assembly was started first, and being all 3/16 inch sheet wood, it goes together quickly. The elevators are supplied in one piece with a wire joiner. The idea is to install the joiner before separating the elevator halves to insure alignment of the halves. I tapered the rudder and elevator halves to reduce weight. As per the plans, they were to be left flat and untapered. I think 3/16 inch is a little on the thin side for an aircraft of this size and would have preferred 1/4 inch sheet for the tail assembly.

Moving on to the fuselage, its sides are poplar plywood and have round cut-outs at the rear to reduce weight. Due to the strength increase over balsa, they do not require doublers in the forward area.

The fuselage is flat on the top, from the firewall to the bulkhead behind the wing, allowing it to be built upside down on the plans. The fuselage sides, firewall, and two bulkheads are pirmed down over the plans, to the work board. The rear of the fuselage is aligned, over the plans, with a combination of squares. Prior to actually gluing the fuselage together, the stringers and wing saddle doublers, etc are installed. It was decided that the lightening holes at the rear of the fuselage made it too weak; so 3/16 square balsa braces were installed vertically between the cut-outs, to strengthen this area. Epoxy was used for the fuselage construction forward of the wing and cyanoacrylate for the remainder.

About this time, it was becoming apparent that the space for radio installation was smaller than I was used to. With surplus lite ply from the die cut fuselage sides and scrap 3/32 balsa. I fabricated a canopy of sorts. Also added was a sheet cowl of 3/8 soft balsa. The above changes gave the Stik a slightly different look and provided more room for the radio.

The wing was now started and was built in two separate halves on a straight flat board. First the rear trailing edge sheeting was trued and pirmed down. The trailing edge rear filler strip was epoxied in with slow cure epoxy and pinned flat. The ribs and spars were added and glued into place with some cyano.

With the wing half pinned to the board, all possible parts were added; then the wing was flipped over, re-pinned, and the remaining parts added. At no time were pieces added without the wing being flat on the board and pinned or weighted. It should be noted that the bottom of the ribs are perfectly straight from the main spar to the trailing edge, both top and bottom, which made the task simple. A criticism here is that as most modelers build the wing in two separate halves, the center rib should be doubled, one for each wing half. This allows each half, or wing, to be built separately and accurately. I fabricated additional pieces and built identical halves. After joining the wing panels, the center section was glassed. No mention is made of reinforcement of the center section with glass. Although the wing appears strong. I glassed the center section because it is a critical area. No particular problems were noted on the wing except as mentioned and it proved to be straight and strong.

Ailerons were hinged with my own gapless hinges along with the elevator and rudder. The plans indicated that the outboard aileron ends are wider than the inboard ends. I believe that this invites possible flutter but I followed the plans in this case and had no problems during flying.

With the fuselage structure framed out, the radio and control rod installation was tackled. The servos were tray mounted to 3/8 square servo rails, installed between fuselage sides. DuBro metal control rods running in nylon sleeves were installed on rudder and elevator with a cable being used for throttle control. Holes were made for switch, charging jack, control horns..." 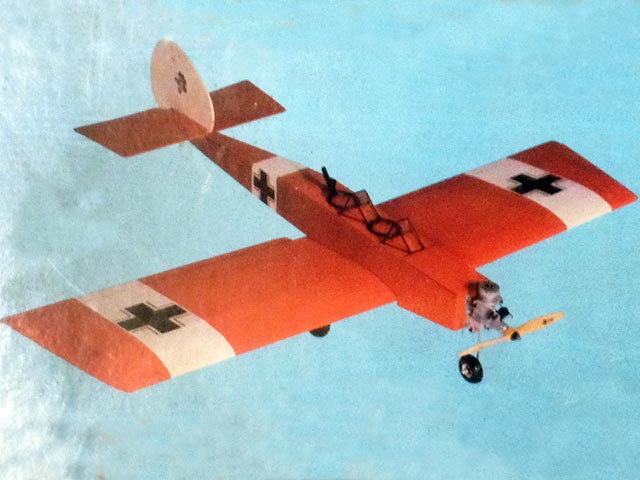