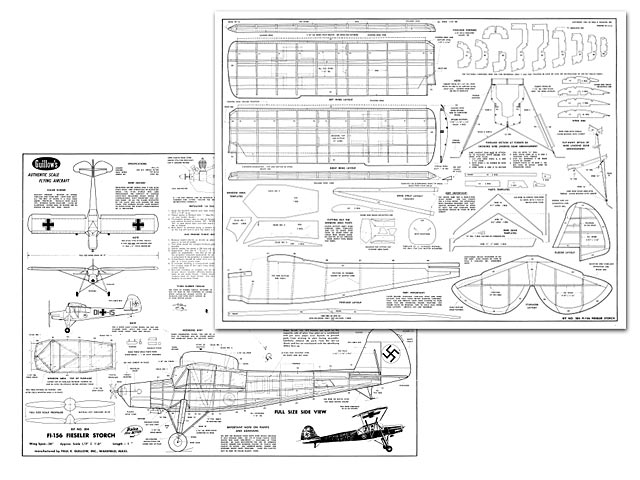 Quote: "Here are the plans for the Guillow's Storch, they have not offered this kit for many decades now. Scanned from the original kit plans, 500dpi B&W tiff, 'printed' from Irfanview at 100% size to PDF using the PDF Creator." 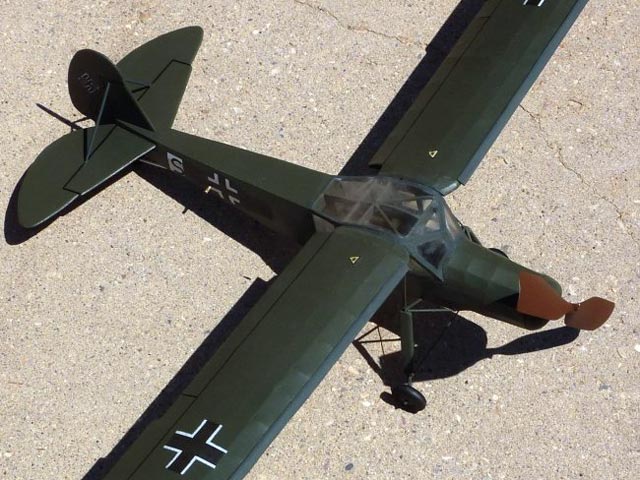 Pic of his nicely completed Storch [pic 003] is thanks to Bill Gaylord. Quote: "Hello Steve, I built the Guillows Storch kit as an RC conversion. The plane has flown a few times, and even has real airfoiled slats on it."
SteveWMD - 25/02/2013
A very nice laser cut kit of this 24 inch spanned FI-156 Fieseler Storch, is available from Aerowerkes at http://www.aerowerkes.com/SRKS.html
PaulGittel - 28/02/2013
Here's my rendition of a Guillows kit from the past, a scratch-built Fieseler Fi 156 Storch [main pic, 004-007]. During the Soviet siege of Berlin in 1945 Hanna Reitsch was flying this STOL aircraft from a narrow road in the Tiergarten! Construction of this model was relatively straight-forward, with the exception of its landing gear and the wing attachment/canopy setup. Long nose moment and high-wing configuration make for a good free-flight subject. Thanks to Steve and Mary (Outerzone) for the plan.
Neal Green - 12/10/2021
My compliments, a real beauty Mr. Greens model of the famous observation plane.
The Storch's undercarriage has indeed posed obstacles to many modelbuilders or even prevented them from building it.
Reason: the aircraft looks totally different in the air than on ground. The u/c legs come together narrower in the air and spread when coming in contact with ground. So modelbuilders have to choose either parked position or flying position. Both look unreal or even strange when seen the other way.
Building a scale u/c with moving parts like the original had requires very good or even best modelling skills.
So I recommend to all stillnotsogood-modellers, if it must be a Storch, than better try a copy of the Fi-256 than one of the Fi-156.
Robert Schlickewitz - 13/10/2021
Thanks, Robert. I recall when this kit appeared on the market way back when…1965 or so, and my own assessment then as well…. Guillows appeal, at least for myself, was a simple vacu-formed canopy and the landing gear which could be dispensed with entirely on the finished model. Both of those items posed a real challenge when constructing the Storch. Seemed to me that the Fiesler had only a short retail run. I assumed those were the major reasons. The Guillows Storch canopy is literally pieced together old-style and the landing gear is a must…no escaping it.
As an interesting historical note, such was the Storch’s reputation at flying in and out of difficult locations that it seems everyone with any authority was piloting them as personal transportation, even Allied commanding officers! They were considered “easy-to-fly.” Alas, maybe they were a bit too easy to pilot. Many accidents occurred as pilots came to expect a virtual impossible performance. Interestingly, the aircraft had a propensity to encourage poor piloting etiquette with expected negative results!
Wings of the Storch are long and as such, wing-struts are functional. Canopy glazing makes a challenge in creating a strong wing center section. If a modeler is into such challenges, recommend constructing the Westland Lysander.
Neal - 13/10/2021
The Storch is one of my all time favorite aircraft. Maybe, due solely to its unique undercarriage, its profile in the air is unmistakable. Yours is a wonderful presentation!
Jan Novick - 13/10/2021
One of the best renditions to the Storch is the one by grandgreatmaster Kermit Weeks, to be seen here:
https://youtu.be/8e8rwgm5sFs
https://youtu.be/o43AS_s_zYg
https://youtu.be/wVaUDy-Omn8
Robert Schlickewitz - 13/10/2021
Add a comment