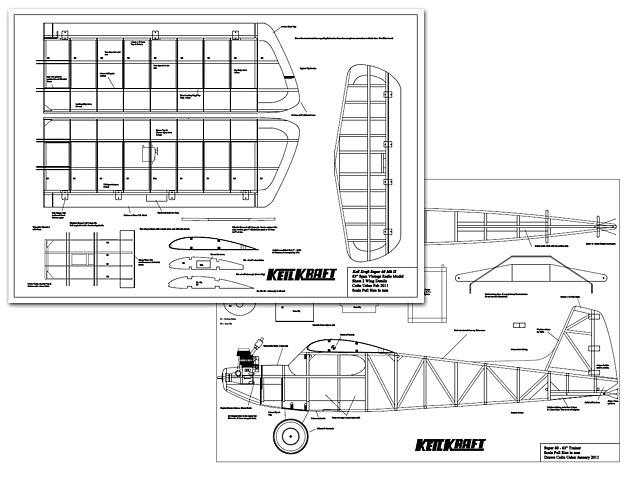 KK Super 60. RC trainer and sport model. The original Keil Kraft Super 60 (oz552) dates back to 1961. This here is a later redrawn version by Colin Usher, which shows ailerons.

Quote: "The Keil Kraft Super 60 first appeared in 1961 and was not 60 in span but 63 in or for the metric brain 1600mm. This was a modernized version of Albert Hatfull's Junior 60 (oz1398). Designed as a trainer it was a single function rudder only model, very much along the lines of my Rudder Bug. Other similar designs have appeared over the years but later models have much less dihedral and full span ailerons and now run to 5 digital servo's, 2.4Ghz radio and superb batteries. How times and technology have changed.

This totally redrawn version is more or less identical to the original design but has ailerons operated by two servos. This makes control more flexible as 'differential aileron' is easily obtained on modern transmitters. This model is ideally suited to Vintage events, usually with the ailerons disconnected to comply with vintage rules. The wing is so simple you could even build two at the same time. One without ailerons and a modern version. This is an ideal model to potter about as it almost flies itself.

Construction is very straightforward and the 2 full size plans can be run off by your local copy shop if required. Just tell them it is full size, metric on A0 paper. The wing is so simple a plan can be dispensed with. It is basically a rectangle with equi-spaced ribs."

This is a modern redrawn PDFvector format plan. 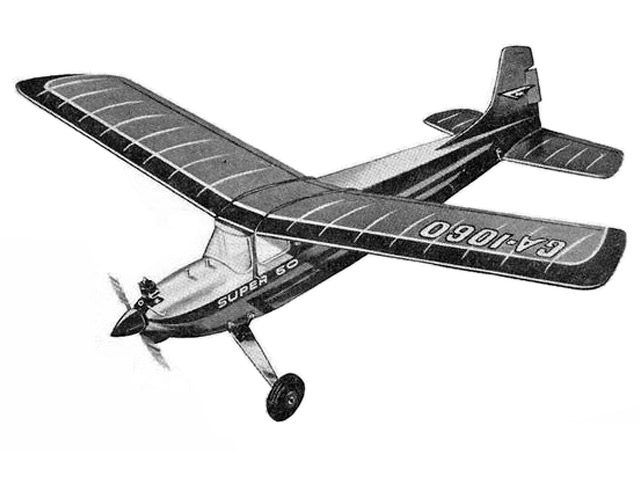 Thanks to everyone who has pointed out that Albert Hatful did not design the Super 60.
SteveWMD - 24/02/2013
I do not think that the Super 60 was a modernised version of the Junior 60. Wing and tail planforms are a different shape, tailplane is mounted below the fuselage and not on top of it and the nose is much longer. The Junior 60 was designed by Albert Hatfull and the Super 60 by RJ Webster and P Rogers. In fact they have nothing in common except that they were both model aeroplanes of approximately the same size produced by the Keil Kraft company.
P6D - 12/10/2019
We are quoting Colin Usher's words here, of course. I take your point. But it's really just minor semantics. The two kits have a great deal in common. The Super 60 is the model that KK produced as a replacement for, as a updated version of, the Junior 60. So rather than saying: "the Super 60 is a modernised Junior 60" perhaps Colin could have said: "the Super 60 is what KK ended up with, after setting out to make a more modern version of the Junior 60". I'm not sure the distinction would help anyone very much, to be honest. There is more to read on this if you follow links from Super Sixty (oz552). They started out the design process by trying to keep as many common parts and features as possible, between the two kits.
SteveWMD - 12/10/2019
The Colin Usher website has been down for some years now. But the Wayback Machine has archived captures. So for example his old page for this Super 60 plan is at https://web.archive.org/web/20110...
SteveWMD - 20/03/2020
Steve, may all your landings be upwind!
A quote from the links page: "A superb site for genuine Vintage Plans www.outerzone.co.uk " :-)
Miguel - 20/03/2020
Add a comment