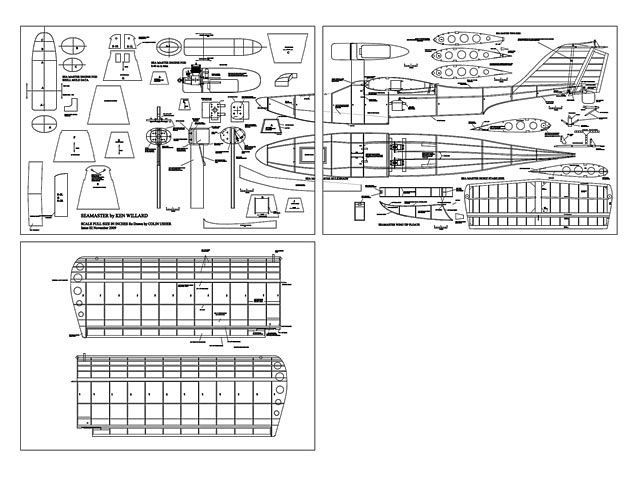 Quote: "The late Ken Willard was a prolific American designer of model aircraft & his Wavemaster Seaplane must be one of his finest creations. This design was only ever produced as a kit, and as far as we know, no plans exist. However he later produced the Seamaster which seems to have corrected some faults in the original Wavemaster design and Seamaster II which again was kitted.

All three model are very similar. The kits are no longer available and the companies ceased trading many years ago. The only external difference is in the tailplane location. The Wavemaster tailplane is in the normal position but the Seamaster series have the tailplane on top of the fin, well away from the water surface. Also the Seamasters were much lighter.

As a kit, Wavemaster had a moulded fuselage in two halves. If you are considering a flying boat or seaplane you can do a lot worse than this proven iconic design. It has a considerable following in the USA with larger & smaller designs, some with electric power.

The plan is widely available from various sources on the Internet but this version has been more or less totally redrawn and is offered as a PDF file for ease of printing.

The model is of straightforward construction with an easy to build parallel wing. The most important point is to make 100% sure the hull is watertight with a good waterproof varnish on the inside, done after construction by pouring varnish in through the forward hatch, fully coating the insides, and the letting most of it drain out again."

I have built this particular plane and modified it by making it a v hull. Apart from that it is the best plane I have had and flown with hundreds of flights logged on water and land.
sonyag - 24/02/2013
Add a comment