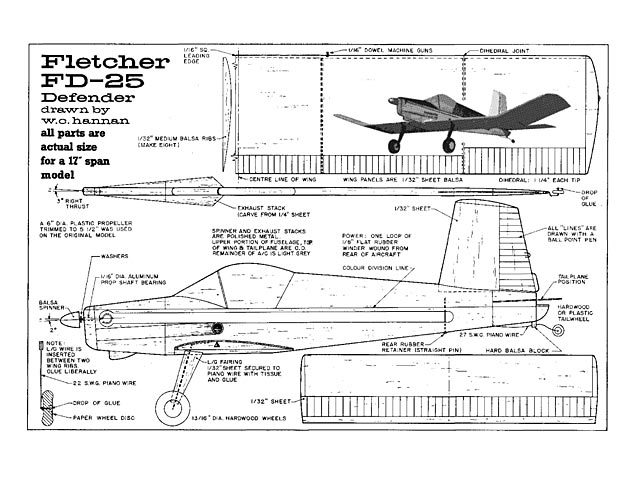 THE basis for this little caricature model was the Fletcher FD-25 Defender. First flown in 1951, the FD-25 was designed by John Thorp, of 'Sky Skooter' fame, as a potential COIN fighter, for close-in ground support work. The prototype shown in our photo, was constructed largely of magnesium. but later editions employed the more conventional aluminium.

Powered by a Continental E225 engine, the FD-2 had a usable speed range of from 41 to 187 mph and was capable of carrying a large variety of external armament in addition to its two 30-cal, machine guns. The distinctive exhaust stacks are the visual manifestations of the unique Fletcher 'jet-cooled' augntenter system, which added approximately 35 hp to the engine output.

Altogether, this was a remarkable aircraft, and one which, had it been put into production, would undoubtedly have been a useful military tool in today's trouble spots. A more comprehensive description (with photos and a 3-4 view) may be found in the January, 1965 issue of Air Progress magazine.

Now to our model. The selection of balsa wood is important if good performance is to be achieved. The fuselage should be light, but stiff to resist bowing under the strain of a fully wound motor, and the tail surfaces should be very light to minimize the need for nose ballast.

The wing should be made from medium weight sheet balsa with a hard 1/16 in square leading edge stiffener. There are two inboard wing ribs per side, spaced just far enough apart to permit the landing gear wire to be inserted. When forming the dihedral. it will be necessary to trim both sides of each dihedral wont to a concave shape in order to obta'n the correct angle. (The problem will present itself quite clearly when you try ill) Some quick-drying glue will facilitate what almost must be a hand-held-while-drying assembly operation. Note that two 1/32 in wing ribs are used at each dihedral juncture to ensure adequate strength. The section of the fuselage beneath the wing opening is removed temporarily while installing the wing.

In the interests of saving weight, the light grey of the full-size machine is represented by the natural balsa colour on our model. We also elected to omit the olive drab on the wing and horizontal tailplane - not because of the weight penalty but for fear that the camouflage would be too effective against the dark green foliage of our Sepulveda Basin flying field! To those of you who are flying over light-coloured terrain, this would present no difficulty. An alternate colour possibility is the all-over black that one night-fighter version of the Fletcher carried." 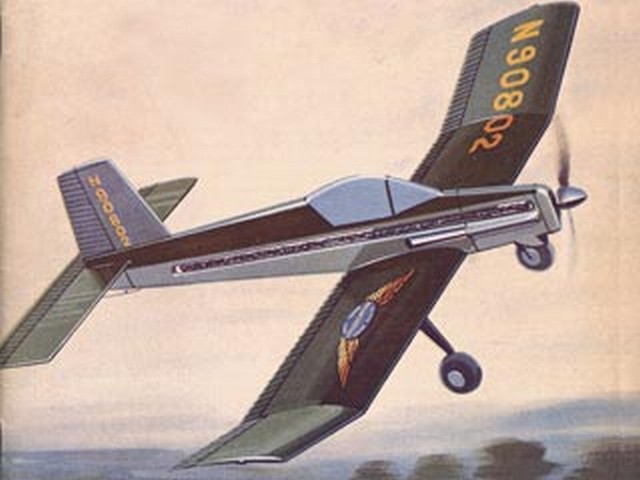