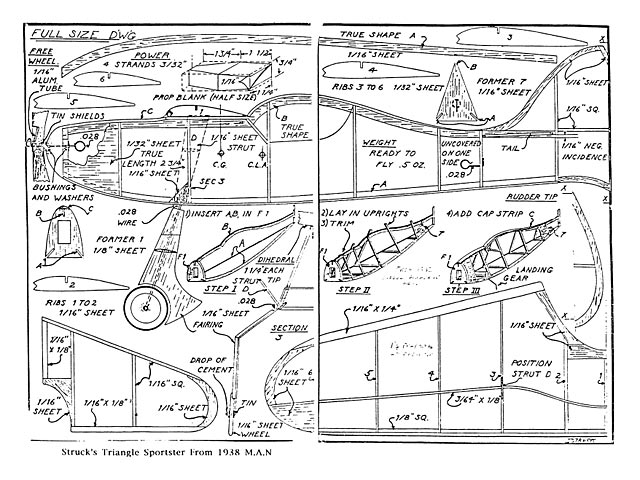 Quote: "From Airflow Newsletter, not sure of date but postmarked Nov. 1998, edited by John Whittles: Henry Struck's Triangle Sportster from 1938 MAN."

THE sport model is one of the most neglected model airplane types. This is a strange situation as a great many builders are not primarily concerned with contest flying. but participate in the hobby for the sheer pleasure to be found in building and flying airplane models.

Bound by no set rules of weight and size, the variety of designs, combining simplified real ship lines and good stability principles, is practically unlimited.

As an example of what can be done in this field the 'Triangle Sportster' was designed. The construction is exceedingly light, yet very strung. The inverted triangle fuselage conveys the basic idea of a racy ship, powered by an inverted "Vee" type engine. In the force set-up, the centers of gravity and lateral area, as well as the thrust line are properly located for inherent stainstainlity.

The promise of these principles was fulfilled by the long and outstanding perfnrmance of the original ship. of set thrust of any kind was necessary, even though the climb was very swift and steep, with a fairly small circle against the torque. Flown in a large armory a cluratii in of nne minute, fifteen seennels was attained. Wilma taken outdnors and tested in both windy and calm weather, unusual buoyancy and stability were exhibited, resulting in many snaring Nights.

Full size plans detailing the simple construction used, make it possible to complete this flier in a remarkably short time. For maximum strength and lightness it is advisable to use the 'quarter-grain' variety of balsa (speckled appearance).

Fuselage: The fuselage consists of three longerons cut of 1/16 sheet balsa. The true shape of A is traced from the pattern at the top of the plan, while B may be taken directly from the side view. Cement the longerons into the nose former F-1, cut from 1/8 sheet balsa. The rudder post of 1/16 square is next glued in place. Check the alignment of this assembly very carefully.

Former F-7 is cut of 1/16 sheet balsa and the rear hook, bent of .028 piano wire, is planet cemented securely to it. Fit the bottom cross pieces in place. The uprights are laid in position and allowed In nroject above the top longerons. After they are set the excess length is trimmed off.

A 1/16 x 1/4 cap strip, C, is cemented to the top longeron and sandpapered to round off the corner of the fuselage neatly. The first panels of the fuselage sides are filled in with 1/32 sheet and small triangular reinfonrcements are cemented at section 3. Cut the rudder outlines from 1/16 sheet, tracing their shape from the plan aml build up the rudder frame directly on the rear of the body.

Landing Gear: The fnundation of the landing gear is bent of a single length of .028 piano wire nine inches long, to the shape shown in the front view of section 3, and then cement sulidly to the reinforcements provided. Fairings are cut of 1/16 sheet, sanded to a streamline section and cemented to the wire only..." 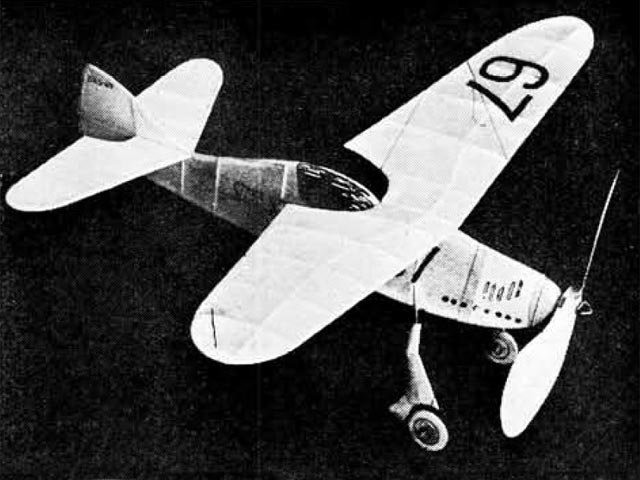 Colour pics of his completed model are courtesy of CaliforniaCondor.
SteveWMD - 21/02/2013
Add a comment