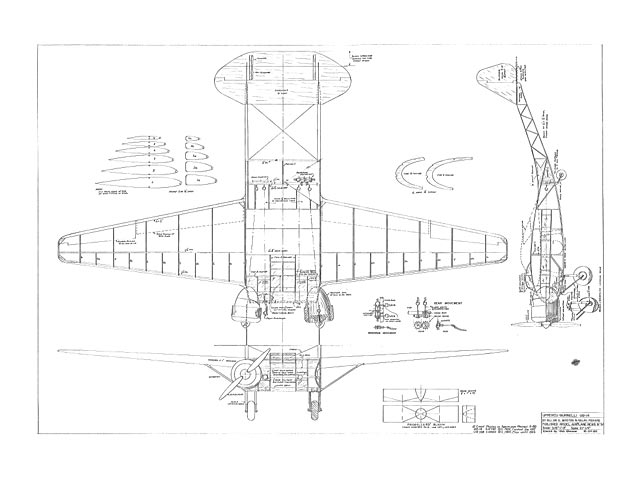 Quote: "Following scanned from March 1998 Airflow newsletter. John Whittles was the editor at the time... these plans were submitted to the newsletter by Dr Harvey Pastel. The Burnelli twin plan was part of an article, which I don't have." This is not a fully assembled full-size plan. This is a copy of the original magazine pages, as printed 1937.

Quote: "Build This Flying Burnelli Transport. How You Can Build and Fly a Model of the Most Unique Transport-Bomber Ever to Take the Air By Alan D Booton and Ralph Pickard.

THE unusual design and safety features of the Uppercu-Burnelli all-metal 14 passenger transport have caused favorable comment both in the US and abroad. The ship resembles a huge flying wing and the airfoil-shaped fuselage tends to carry its share of the toad. The two 725 hp Pratt & Whitney engines are mounted on opposite sides of the leading edge of the fuselage, at angles away from each other to counteract the opposing drag caused by flying with one motor. This feature is included on the model, while the retracting gear and wells are omitted for simplicity.

The model passed through several stages of experimentaticn before the present systems of powering were adopted. At the beginning, single motors were applied to each propeller. Lot the duration was too short. Then outrigger motor sticks were tried with success, but they spoiled the appearance of the model. Finally, two sets of motors were tried with each prop in the manner shown on the drawings, with equal success. If you do not care to make the balsa gears, the Hovespian movements may be used. Metal gears were tried and it was found that they weighed the tail of the model down too much to add proportional weight to the nose. The balsa gears are light, easy to make and fit in well with model building methods, because the shafts are cemented to the gears in the same manner a propeller is attached.

Fuselage: Make two sides of the fuselage right on the drawing. Use 1/16 sq except where 1/16 sheet is shown. To get the curve at the front, seen on the top view of the sides. pinch the wood with finger nails at 1/16 intervals until the curve of the sides matches the curve of the drawing. Assemble the sides with the spacers between. Cover the front with soft 1/16 sheet after the A and E formers have been cemented in, and cut out for the lower windows and the front plug openings on the leading edge.

Make the two tail booms right on the drawing to insure true shape. The longerons and spacers are 1/32 x 3/16, stripped out of 2 in sheet. The 1/32 formers and small tail block are cemented on while on the drawing.

Cowlings: Carve the cowlings otrt of medium balsa ti the thickness shown to get the proper balance. Add the 1/8 discs and noseplug to each. Sand the outside of the cowlings between coats of dope. Cut out a portion of each cowl, one to fit the left side and one to the right. Be sure to keep the top and sides correct, relative to the center lines of the prop shaft.

Propellers: Cut both blocks to time saute shape blank, but carve one to turn left and one to turn right. It is possible to use two right hand props, but a left and a right are more efficient. Note that the spinners are carved integral with the props. Cement 1/16 tubing in the noseplugs, insert the prop shafts through plugs and props with several washers between, and bend winding loops in the shafts before cementing.

Tail Surfaces: The tail surfaces are cut out of 1/32 sheet balsa. Make a whole stabilizer from the half pattern, and two rudders. Cement the rudders to the stabilizer as shown on the drawing. Now make the 'extra stabilizer surface.' The model will fly without it, but better glides and performance result from its use, and then it may he removed to return the model to scale. The 'extra' has the 1/32 x 1/8 prongs cemented to the top and bottom to hold it to the stabilizer without cementing to the stabilizer.

Landing Gear: Note that the front 'struts' are really 1/32 sq rubber and the top wire fitting is bent to extend to the front to prevent the gear from folding forward, but permits it to spring backward when struck. Follow the drawing and you will be pleased with the results.

Movement Units: To get matched gears, it is best to make a sheet aluminum pattern. Bend a pin U-shaped at the point and cut the head off. Cement 3-1/32 x 2 in sq sheets of hard balsa together with the grain of each crossing the ether. This plywood should dry several hours before attempting to use it. Scribe 1/2 in circles on the surface of the plywood with a compass, then cut and sand carefully to the line. Nine discs are obtainable from the 2 in sq sheet, enough to have several to practice on. Now place the aluminum gear pattern on a disc and insert the bent pin, straight end first, in the center holes of both and pull through until the point reaches the pattern. Force the point through the pattern and into the disc. In this manner, the pattern is held in the same place throughout cutting. Now cut the teeth with a razor saw blade..."

Update 03/07/2021: Replaced this plan with a much clearer version, traced onto a single sheet, thanks to dfritzke. 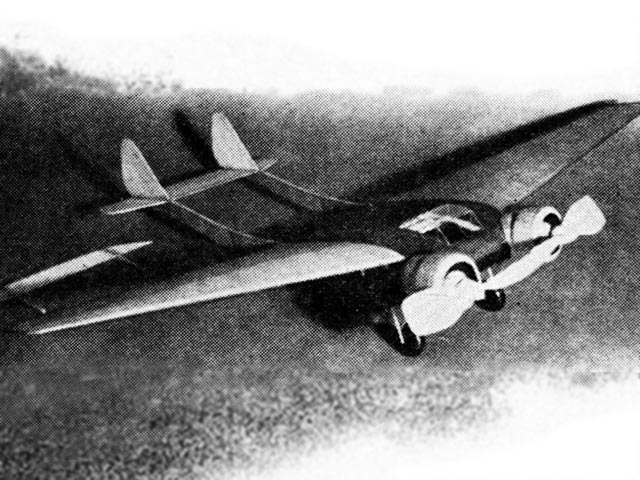