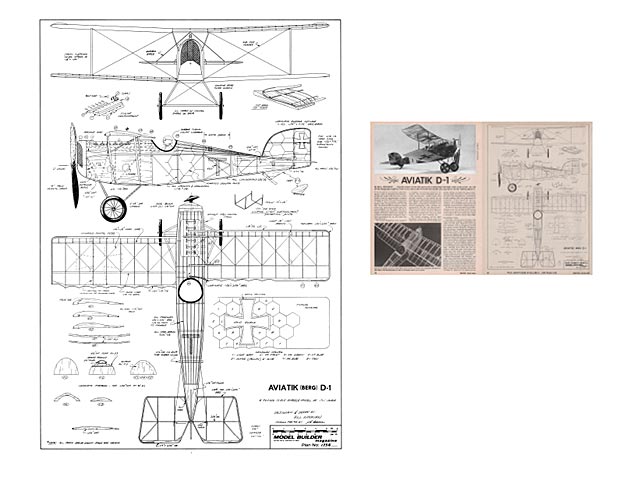 Quote: "Another lesson in the fine points of outstanding free flight scale construction, by one of the recognized experts. Even if you don't plan to build this model, you can learn a lot by reading about it. Aviatik D-1, by Bill Noonan.

The Aviatik D-1, sometimes called the Berg D-1, after its designer, was of Austro-Hungarian origin, and was used on the Italian front in considerable numbers between autumn 1917, and the armistice in 1918. It was a compact, single-seat fighter with a wingspan a little over 26 feet. The hatchet-like fuselage provided relatively good protection and ac-commodation for the pilot. The D-1's robust appearance belied a somewhat fragile structure, which was subject to constant modification during its short-lived production by no less than five manufacturers.

The Austro-Hungarian army assigned a complex numbering system to its aircraft. The system identified the air-craft constructor, model type, and aircraft number in the series. As an example, our reproduction is of Aviatik D-1, 138.43. The number identifies the 43rd plane produced by Aviatik in the second production order (Aviatik was assigned 38, 138, 238, and 338 prefixes). The source for all of our information in preparation of the model is Profile Publication number 151. You may wish to consult it for color schemes, etc.

The Aviatik company, and its chief designer. Julius von Berg, were the orginators of the D-I, but the design was always being changed during production by other contractors. This accounts for the varied appearance, particularly in the radiator area and placement of armament. Pilots found the D-1 responsive and pleasant to fly, but the cooling was its Achilles Heel; hence the fiddling around with the radiator design.

Production documentation in Austro-Hungary was a bit careless in 1917, so it is not known exactly how many D-I aircraft were built by the five contractors, but it is thought to number about 700 to 800.

CONSTRUCTION Fuselage construction follows the time-honored method of building the sides over the plan. Hold the main (top and bottom) 3/32 sq longerons on the wax-paper-covered plans by using plastic 'pin-downs' (available through Peck Polymers). These handy little gizmos secure the balsa in place without the hazard of splitting the wood. The upright and diagonal components are hard 1/16 square balsa, with the exception of the nose and tail uprights, which are 3/32 square. Use of 1/16 stock allows the 1/32 sheeting to be inset into the fuselage, forming flush sides. Be sure to make a right side and a left side, one built over the other, separated with Saran Wrap or wax paper to prevent surplus glue from causing problems.

When thoroughly dry, remove the sides from plan and cement them to-gether at the tail post, holding with a weak clamp. Set the fuselage on bottom longerons and cement in the 3/32 cross braces at the widest point in the fuse-lage, forward of the cockpit. Check the fuselage for alignment by sighting from the front..." 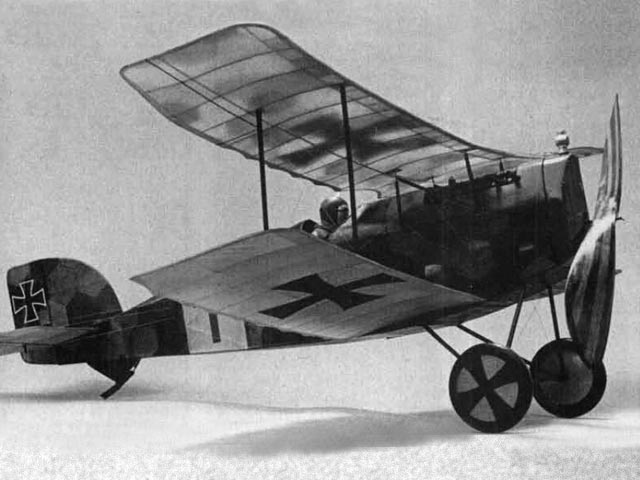