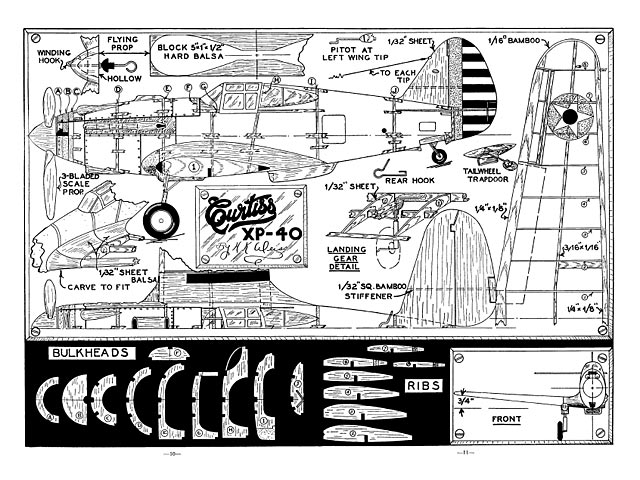 Quote: "The XP-40 Takes to the Air. A Realistic Scale Model of a High Speed Curtiss Pursuit Plane Designed in Careful Detail That Will Fly For 25 Seconds By Herbert K Weiss

For several months we've been planning to work up a model for this series that would have considerably more detail than the simpler layout of the past. We were willing to sacrifice a little performance in the interests of, say, closer wing spacing and a couple of coats of dope. To offset the increased weight, we wanted a very clean ship with low frontal area; this, of course, eliminating the radial engined prototypes. Our ideal was a mid-wing ship with liquid cooled engine, slim fuselage and reasonable tail area. But somehow we couldn't find quite the plane.

We'd pretty nearly given up the United States and were all set to have another look at Jane's All the World's Aircraft, when we picked up a newspaper - and there was a picture of the XP-40. She was low-winged rather than mid-winged, but otherwise she was just what we wanted, and after a good deal of scurrying after data we were able to lay her out on the drafting board and begin building the model.

We might say something here about the original large plane. Several years ago, the Curtiss company was developing its model '77' low-wing fighter. Pictures that slipped out of the plant occasionally showed a great deal of experimentation going on to determine the effects of many design changes.

Every engineer knows the value of trying every design combination in hopes that there may be one which will be outstanding from the rest, but very few have the patience to apply this principle to the small features of a project; such as windshield contours, vent locations, landing gear fairings and the multitude of possible variations of detail design.

Model builders who have followed the old Hawk bi-plane series are well acquainted with the thoroughness with which Curtiss engineers investigate the possibilities of design changes. Hawks were built with straight wings, tapered wings, wing radiators, fuselage radiators; with inverted, radial and V-engines; with air-cooled, water-cooled and liquid-cooled engines. Landing gears with split axles, single struts, pants, spats, unfaired struts, faired struts and fully retractable gears were built. The same principle of trying everything was advanced to the 77 monoplane. And so when the ship finally emerged successfully from US Army tests, it became the already famous Hawk P-36, which needs no introduction to any model builder.

But the engineers were still not satisfied. In collaboration with the Army Air Corps specialists at Wright Field they produced a P-36 with co-axial props, the P-37 with Allison engine and finally the XP-40, which flies over 390 mph, and can climb almost a mile a minute..." 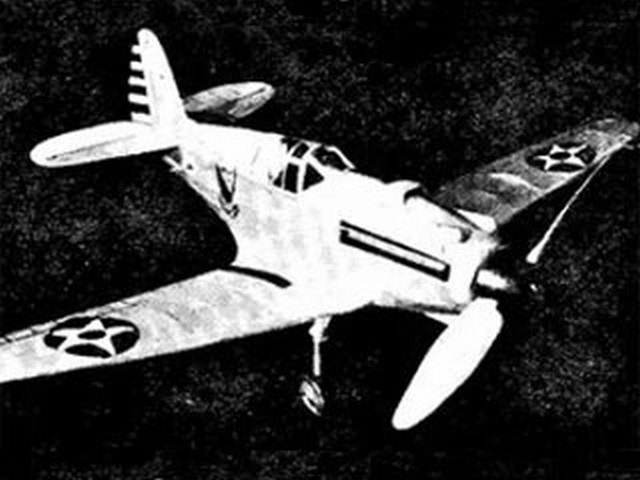