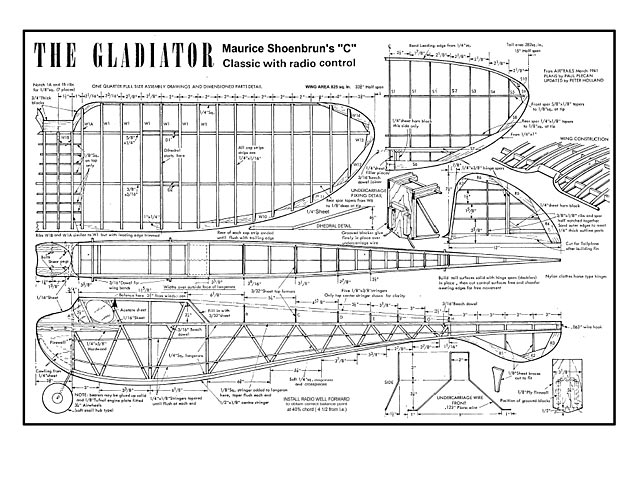 Quote: "FOR the first few seasons of gas-model building, from the very start of the hobby up until the 1939 season, a majority of the motors manufactured were in the Class C bracket. As a result, throughout the country diere are thousands of model builders with Class C motors of around .6 cubic inch displacement who have been flabbergasted by the new rules. After hours of brainwork designing two-pound ships for these motors, at once they were compelled to build three-pound ships - according to the rules.

Take a good look at those rules again. In order to reach a minimum wing loading of eight ounces per square foot, one must use at least six square feet of area. Now that's a lotta wing. Therefore, the ship on which it is used must be of very clean design, and the airfoil must have high lift and a relatively low drag, so that the motor will not have to strain in pulling the ship up into the thermal territory.

We'll skip the long hours over the drawing board, and the brain fag brought about by our mental labors. Sufficient to say that we evolved the Gladiator, which meets all our requirements and which has surprised even us in performance.

The ship is of clean design. A turtleback fuselage with stringers, and additional stringers on side and bottom of the same, give a streamlining that reduces drag to a minimum. The wing has slightly less than the six square feet and has a thin airfoil to reduce the drag and aid the climb. The tail moment arm is a bit out of the ordinary, and in it lies the secret of the phenomenal performance. The added length of this lever will cut down the climb slightly, but the pancake glide more than compensates for the loss in climb. The Gladiator practically stands still alter the motor has cut, much in contrast to many speed demons that haunt Class C today.

The ship, in early stages, was quite a problem as far as the position of the center of gravity was concerned. First models had the CG placed eighty-five percent behind the leading edge of the wing. In theory the lifting stabilizer of large area would keep the tail up, but to our sorrow we found that 1/4-inch positive was needed in the stabilizer to obtain a good glide. Under power this adjustment caused the ship to dive rather horribly, so we immediately sought a cure. The CG was moved to the position indicated at present which is forty percent behind the leading edge, and immediate improvement was noted. The incidence was removed from the stabilizer and this improved the climb tremendously, and made the glide even flatter.

Directional stability is insured by the large rudder, which is necessary to bring the CLA (center of lateral area to you) back to its present position. Rudder, by the way, is extremely important not only for directional stability, but to aid in making flat turns.

After preliminary flights to make adjustments, the Gladiator began living up to expectations. Many witnesses will testify that the ship consistently turns in three minute flights on a twenty second motor run without benefit of thermals. The surprising part of this performance is that the motor (a Dennymite) has never been opened more than half throttle..."

Hank Baer mailed in to say: "Sirs; You show the plans for the Gladiator and a picture of it. I built the model pictured and that's my wife holding it. The plans you display are for the Gladiator 1. My model shown is a Gladiator MK ll. The wing is the big difference: it's a polyhedral wing that is 78 inches long with a considerable difference in wing area. The plans for the Gladiator ll wing were obtained from John Pond and should now be owned by the AMA here in the states. There were no dihedral dimensions on the plan so I set it up with the same angles as used on a Playboy Sr. The model pictured is powered with a .60 Hornet on ignition, I later changed the engine to a .60 sized Super Cyclone. It is an excellent flyer with a very flat, low sink glide."

Article pages, text and pics, thanks to AugustaWest: "original article from 1941 Airtrails reprinted in 1984, magazine unknown. The plan OZ0004 is from the same reprint."
Item #2: Original article as printed in March 1941 Air Trails, with drawings over 3 pages, includes formers at full size, thanks to warkshop. 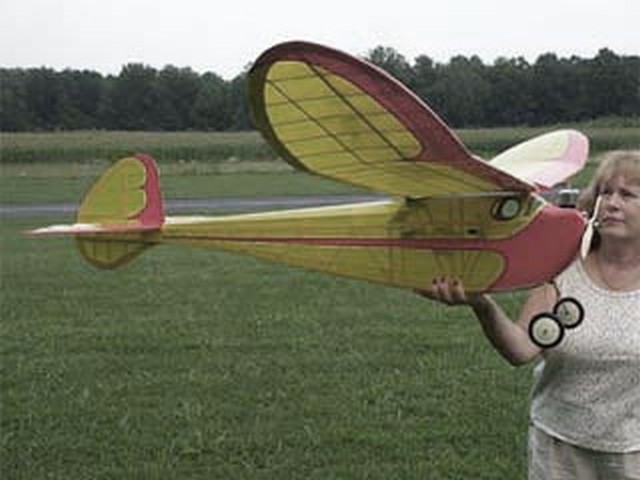