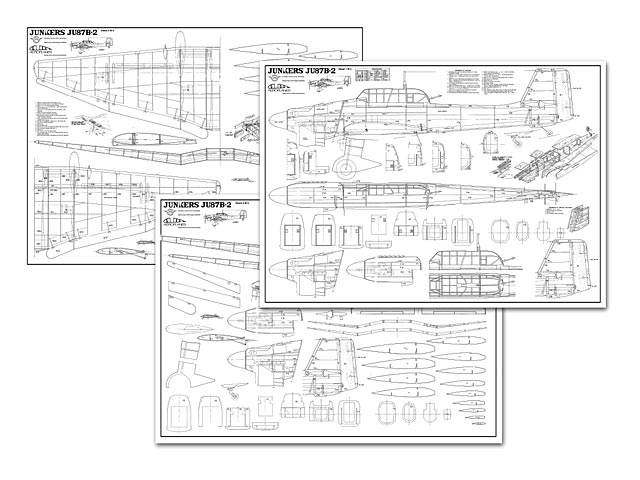 Update 27/03/2014: Have now replaced this plan with an astonishingly detailed re-drawn version, thanks to RamsesdeLooff. This very nicely fixes the problem of the previously missing ribs and formers. This plan is 166cm wingspan, the same as the original kit.

Quote: "Hi Steve, Maybe I've got an addition for your very nice website. I've downloaded this plan from your website, but as stated there it is not complete. There are no wing or fuselage formers on this original Royal/Marutaka plans. I've completed the original plans with the missing formers and added more info to the plans. There are now three sheets instead of two. The last sheet contains formers etc. The only thing is that I reduced the scale to approximately 1/10,5. When someone likes to build the Stuka in the original Royal/Marutaka scale, one has to blow up 'my' plans a bit. Best regards,"

Note: To avoid confusion: Ramses redrew the plan at 132cm span and used that plan to build his model. The plan you see here has now been re-scaled back up to fullsize at the original 166cm span.

Some of you older readers may recall a time when we flew model aircraft with miniature internal combustion engines, these were usually regular petrol engines or 'glow' engines which ran on methanol and castor or synthetic oil. They were noisy, often reluctant to start and covered our airframes in oil and grease to the point where they were soaked and had to be thrown away. The covering had to have a liquid applied called 'fuel proofer' otherwise the paint would dissolve and make the most awful mess. The kit described here and the reason for choosing it originated in those far off, eco-antagonistic days.

Why A Stuka? It all started over thirty years ago with a rape alarm. I really cannot remember how I acquired it but essentially it comprised a miniature siren, similar to the type, albeit much larger, cranked by the ARP during WWII. I have every confidence that it would have deterred an attacker, for it had a piercingly shrill note, but my imagination wandered to 'Blitzkrieg' and 'Stuka'. I took it apart, put the actual noise making portion in a box and threw away the remaining battery box for four 'C' cells.

Fast forward to this century. I had completed and flown the Dart Dakota (Q&EFI July 2009) the building of which had taken two years and I needed another long-term project. As I was musing I came across the box marked 'siren' and after a quick test with four AA cells my mind was made up.

A search for plans showed up the Traplet MW2110 Ju87B with 60 in span. Just the size I was looking for and with things like the canopy and cowling available. But before I had actually pressed the 'buy' button on the website I was trawling the BMFA classifieds site and saw an old, slightly larger, Japanese Marutaka kit advertised. I remembered Marutaka from my infernal combustion days as being nicely presented, reasonably accurate kits so I struck a deal with the vendor and he put it in the post.

Construction: My estimate was that the kit was probably twenty years old and was designed for a .61 glow two-stroke. As far as I could ascertain, Marutaka had gone out of business around 1995. The span was 65 in and AUW was given as 7-8 lb. With a wing area of 4.85 sq ft I was looking at about 26 oz per sq ft if I could keep it down to 8 lb.

Measuring the waste taken from balsa lightening holes on previous projects didn't reduce the weight by enough to merit the exercise in my consideration and the quality of wood in the kit was good and reasonably light anyway. I did, however, remove as much of the ply as I could and I cut holes in the spar and the rosewood(?) engine bearers which were structural.

There wasn't an instruction book with the kit, just a few notes on the plan and some exploded diagrams. The easy option was to start with the fuselage which was traditionally built from a main crutch extending between the motor mount and the trailing edge of the wings with a few formers but 3/8 sheet balsa sides, top and bottom. Oh dear what a heavy way to do it and it was impossible to reduce the weight of the sheets before they were glued into place. 1 also took a design executive's decision based on theoretical motor/ battery weights and recklessly mounted the elevator and rudder servos in the tail.

The mainplanes with their 'gull wing' configuration were a bit of a tease. They were designed to get the primary bomb higher and subsequently easier to load. Whilst the ply and balsa spars were jigged there were no building tabs on the ribs so the trailing edges had to be packed up. Just like the troubles in my old kit bag.

The plan was drawn in the days when we stuck a single, standard servo into the wing centre section and used pushrods with bell cranks to get the action to the wing outers. These days almost everyone puts a servo into each wing, using slimmer than standard servos if necessary. I used SuperTec Mini-L's, which offer 3.6 kg-cm of torque, in pairs for both the ailerons and the flaps. On the Ju87 the control surfaces themselves do not form part of the wing as with 'conventional' aircraft, rather they hang off the trailing edge by a series of elongated hinges. This was also a common trait on other Junkers designs, notably the Ju52 Tri-motor. These hinges were supplied in the kit but necessitated the construction of a drilling jig to ensure they were all going to exit the wing at the same angle. The fact that the control surfaces are separate means they all need painting, as does the wing, before they are assembled. The flaps are fully functional, hanging off the wing in two pieces either side in the same manner as the ailerons, which have a very narrow chord so I set in quite a lot of differential. The dive brakes as presented by the kit are non-functioning. Whilst I worked out how they operate during my research on the subject I decided mine would stay non-functioning as well.

A little weight was saved on the wing by sheeting with 1/16th balsa rather than the 3/32nd supplied in the kit.

The spats were a problem, like the cowling they were supplied as ABS vac formed components but were far too narrow for a decent sized tyre. After attempting to make them from glass fibre and blue foam I opted for the traditional way and made them from scratch in balsa. Engine exhaust stubs weren't supplied in the kit so I made one from balsa and, after sealing and polishing, made a mould from which I cast all twelve in Urethane resin.

An aluminium spinner was supplied in the kit but I found it virtually impossible balance so I ordered the Traplet Stuka ABS example hoping it might be big enough. t wasn't, so I ordered a plastic one from Sussex Model Centre. I was pleased to find that cellulose thinned paint keyed to it well.

Although this is definitely a sport scale model I was keen to have a decent appearance so eschewed heat shrink film for the traditional tissue and dope. I rather fancied making one of the very few that had worn RAF roundels after capture (I have an obtuse sense of humour) but in the end I opted for the white and green snow camouflage of the Eastern Front squadrons on Operation Barbarossa.

The Motor: I weighed up the merits of several motors but I had been particularly impressed by the Scorpion range at the Micron Radio Control stand at the Nats and other trade fairs so I ordered a Scorpion 4020/12 based on its specification together with a Scorpion Commander 90 A HV ESC. The latter which will happily run on 26 V is an expensive item and, to be honest, I feel it is a bit OTT as it is supplied with its very own, separate receiver for programming wirelessly via a supplied remote control with more buttons than the one for the TV. 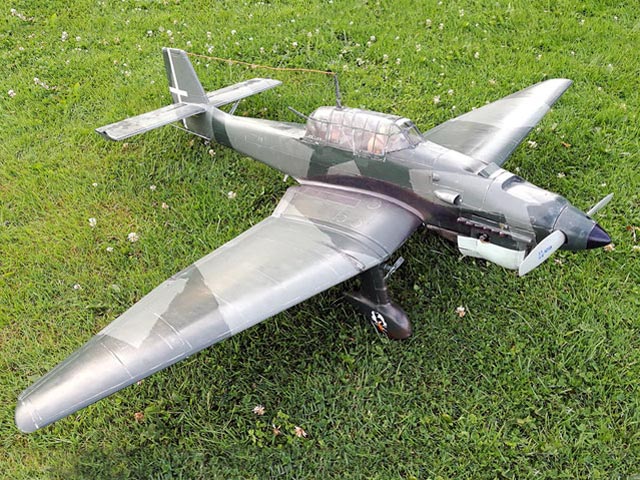 For some photos of the completed (smaller scale) model by Ramses, see more pics [003, 004, 005]. There is also a long (Dutch) build thread with lots of detail and pics showing Ramses' completed model at http://www.modelbouwforum.nl/forums/vliegende-schaalmodellen/199153-junkers-ju-87-b2-picchiatello-w-nr-0353-|-236-sq-96-gr-aut-b.html
SteveWMD - 27/03/2014
Hi Steve, a few years ago I uploaded my Stuka plans to your beautiful website. I'm happy to tell you the Stuka has been maidened successfully! It's a very nice plane to fly! It flies easy and is just a lot of fun. The aileron throws were too much in the maiden flight (as can be seen 😉), but with lesser throws on the ailerons it's a real delight to fly! The maiden video: www.youtube.com/watch. Attached some video stills made by a telephone, low resolution but it gives a good impression [more pics 006-013].
RamsesDeLooff - 25/07/2017
Is it possible to install a working air siren to this model?
Bentsch - 05/01/2019
Add a comment