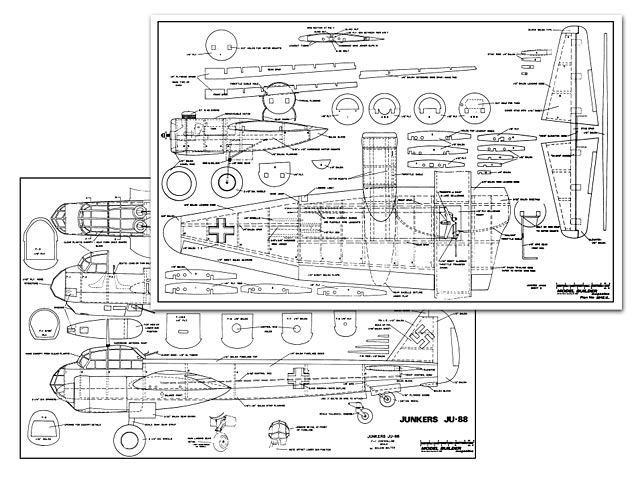 Quote: "
Junkers Ju88, by Roland Baltes. This outstanding C/L Scale model won the author a place on the US Scale Team in 1978. Also adaptable to R/C.

Building a scale model is not normally a spur-of-the-moment decision. When you consider the amount of time and effort that will be required, you'd better pick a subject that can maintain your interest. If competition is the goal, then the availability of data and the suitability of the subject are of importance. Having the real airplane available for scrutiny would also help a lot. It's not surprising then, why models of Mustangs and Piper Cubs are frequently seen. Fortunately most scale modelers like to duplicate something different, an attention getter. A big reason, of course, is to show up with something that's unique. Some take this to extremes, unearthing some rare one-of-a-kind birds. In my case, I tried to satisfy most of these considerations, but one stood out: I liked the looks of the Junkers Ju-88. Little did I realize that the choice I made would someday garner me a spot on the US Scale Team and a trip to England in 1978.

It really wasn't intended that way. Having had moderate success at local contests in control line scale, I needed something that would hold up to the rigors of competition, be reliable, transportable in a VW Squareback, and of course, increase my chances to the winner's circle. These conditions are not all compatible, but since I was not planning to build the 'ultimate' scale ship just yet, they were reasonable compromises. I also had made up my mind that it would have to be a multi-engined ship, since the extra points for additional engines are easily obtainable with the reliable throttle equipped R/C engines.

The choice of what airplane to model was resolved after numerous lunch time trips to the Air Force Museum, which was within walking distance from my duty station at Wright-Patterson AFB. The Junkers just kind of grew on me, and when they wheeled it in for restoration for display, during which process I was allowed access to it, my mind was made up. What more could a scale modeler ask for? A good 3-view, of course. This turned out to be the most difficult part of the project, but I didn't know it at the time. After all, I had the real thing in front of me.

For the scale aircraft buff, the real thing is a Junkers JU-88D-1, a photo reconnaissance version of the A-4 bomber airframe, the difference being the lack of dive brakes and the incorporation of cameras in the aft bomb bay. Records in the museum files indicate that the airplane was flown to Cyprus by a Rumanian defector in September 1943. Briefly tested by the British, it was turned over to the US for evaluation, being flown to Wright-Patterson AFB in October, 1943. The pilot for this uneventful ferry flight was Major Walter E Newby who, many years later, in the rank of General, revisited the JU-88 while director of the C-5 program office at Wright-Patterson.

To my knowledge, this D-1 is one of only two JU-88's still remaining, the other being a JU-88D-1 nightfighter on display in England. Over 15,000 Junkers 88's in numerous versions were built between 1939 and 1945 and many aviation historians consider it to be one of the best medium bombers from World War II. Like most successful airframes, further derivatives were built, such as the Ju-188 and others that could be easily modeled with some modifications to the plans presented here. Profile Publications No. 29 covers the Ju-88A series, while No.148 covers the night-fighters. Additional reference material is listed at the end of this article.

Although this model is primarily designed and was built for control line scale, the experienced R/C modeler could easily adapt the model to an R/C version. With a wingspan of 65 in and area of 540 sq in, two .19 to .30's should be ample. My control line model with two S.T. .40's came out at a weight of 7-1/2 lbs. Only a small amount of weight was required in the engine nacelles to balance the model properly, since the Junkers with its long engine nacelles and good size tail surfaces has good features for model work. This has resulted in a very stable model that is really easy to fly.

The landing gear location is ideal with-out any noseover tendencies whatsoever. Retracts for this model, other than an overly simplified method for sport scale, would be a real challenge, since the prototype installation turned 90° to lie flat in the aft portion of the engine nacelles. To complicate matters, the large gear doors closed again after the wheels extended.

Another complexity of the model is the large amount of window area in nose and canopy. While some may take the chicken way out by painting these on, others may opt for the simpler arrangements found on the nightfighter versions, for example. Only the die-hard scale types will find the will and the way to laboriously duplicate the real thing. Having the real airplane available made the canopy building and cockpit detailing somewhat easier, but still challenging and extremely rewarding. I also found in the museum files a set of German training slides (most of which I copied) that provided more info and details of various parts of the Junkers. Also in the files was a copy of the 'Ersatzteil-Liste' or parts list for you non-German reading types, complete with illustrations.

By now the scale buffs should be drooling with envy, but as mentioned earlier, the lack of good 3-views put some damper on the project. Not even the museum could help. Sure, there is a variety of 3-views around, few even came close to being accurate, but not for the A-4/D-1 version. Again, having the real plane in front of me made it easy to find fault with the 3-views, and it also gave me the opportunity (or real need as a matter of fact) to measure the airplane. I finally settled on 3-views of a JU-88C-6 from the Japanese Koku-Fan magazine, which with supporting documentation was modified to provide a suitable presentation for judging. The 1977 Nats scale judges were sufficiently impressed to get me a spot on the scale team for the following year's World Championships in England.

Although my Junkers by now had been on the contest circuit for a couple of years, quite successfully by the way, it was essentially mothballed, awaiting the trip to England. I even tried to build a new airplane in that hectic year, a DeHavilland Mosquito, in the hopes of better being able to represent the good ol' US. Got it about 99% done when we received word that the control line scale portion of the World Scale Champs was cancelled, due to lack of participation by other countries. This news was provided only three weeks prior to our departure for England! Too late to change travel plans, so with promises that some sort of control line scale event would be flown, we went anyway. To make a long story short, nothing ever materialized..." 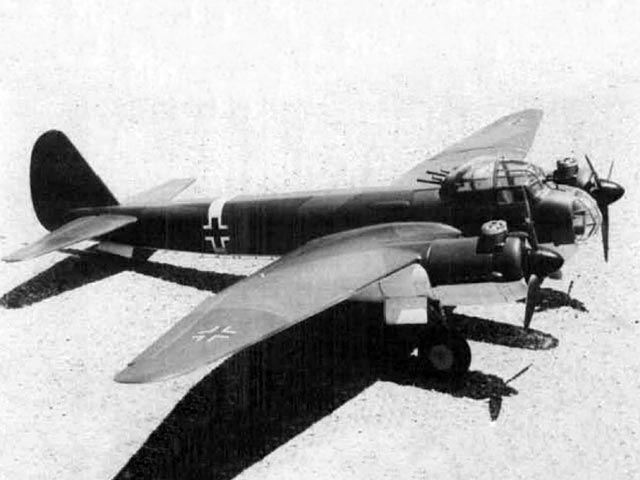