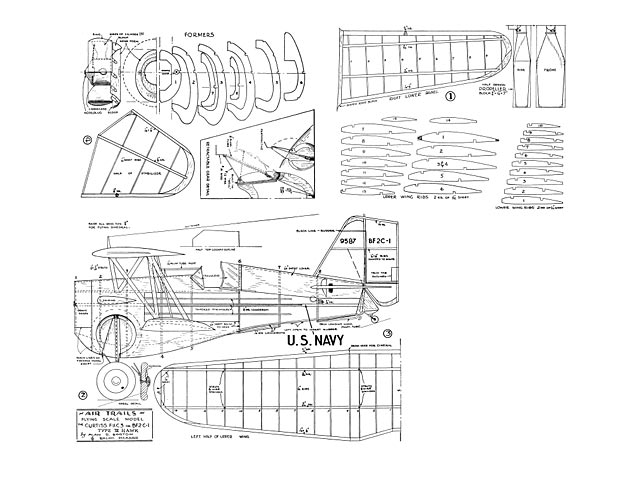 A FAVORITE among Uncle Sam's war planes with model builders is the high-powered, high-performance single-seat Curtiss biplane that has come to be known generally as the Type III Hawk. It is in daily active service with the navy in the capacity of light bomber and fighter aboard the aircraft carrier U.S.S. Ranger. Designated as the F11C-3 and the BF2C-1, it constitutes a powerful air weapon.

The Type III Hawk's speed reaches a top of 244 mph at 10,300 feet under the thrust of the Curtiss controllable-pitch propeller turned by a 750 hp Wright Cyclone. Plans for a solid model of this plane appeared in AIR TRAILS for June, 1936. Part of the Hawk's high performance is due to flush retraction of the landing wheels, which is incorporated in our present flying model.

FUuselage. Make a sheet of balsa plywood with two 1/32 sheets cemented cross grain, 6 x 7 inches. After this is dry, cut two of each of the formers on drawing No. 4. Place the fuselage drawings Nos. 3 and 4 together on a smooth soft board and cover with waxed paper. Assemble the whole left framework right on the drawing. By doing this, the proper contour of the model is assured. When dry, remove from the board and build the right half frame to the completed left frame.

Before going further, make the wheels and the 'wells' for the retracted wheels. The maximum diameter of the well blocks is indicated by the broken line circle on drawing No. 2. Hollow the blocks out so the wheels fit in flush with the back side, then cement 1/16 in disks over the openings. To install them in the sides of the fuselage frame, they must be cut into three pieces and fitted in, removing the thickness of the formers from them. This is done to keep the weight down and to get them lined up better. Let the cement dry and then carve and sand away the surplus wood to the contour of the fuselage.

Cover the portions of the fuselage frame shown on drawings Nos. 1 and 2 with 1/64 sheet. Use plenty of pins to hold the sheet to the formers and butt the joints carefully to obtain a smooth surface..."

Article pages thanks to GTHunter. 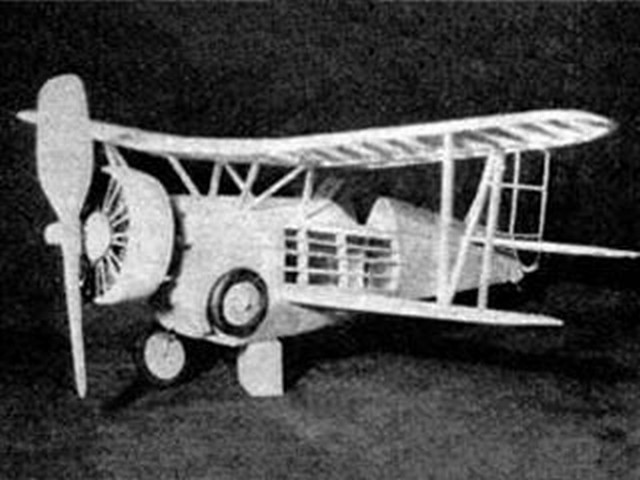