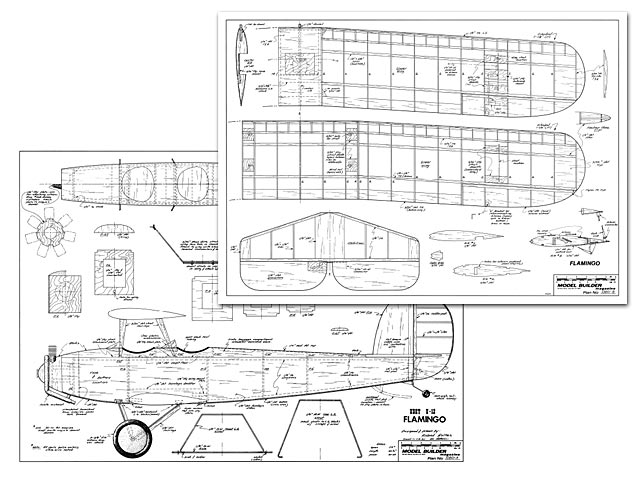 Quote: "The sprightly U-12 Flamingo was the brainchild of Ernst Udet, legendary WWI German ace and top aerobatic pilot of the 20s and 30s, and to this day is regarded as one of the best light aerobatic aircraft ever built. Our author's Sport Scale version has performance to match the full-size ship. Udet U-12 Flamingo, by Roland Baltes.

If you are a WWI aviation buff, the name Ernst Udet probably rings a bell, as he was one of the famous German fighter pilots of that war. That he was involved in aircraft design and building in the 1920s may not be such common knowledge. Were it not for Aircraft Profile No.257, I seriously doubt that the Udet Flamingo would ever have made my list of models to build someday. Like many scale modelers, I have over the years collected a large library of scale information, including most of the Profile Publications. These booklets, which unfortunately may be hard to find nowadays, are a real boon to scale modelers since they provide a wealth of info including a colored 3-view and lots of pictures.

The impetus for actually building the model came as a result of a flying buddy having built a Concept Models 'Fleet' Barnstormer, which meant that I had to have a bipe also, plus a discussion with ye ol' editor, whose eyes lit up when the word 'Flamingo' was mentioned. He also happens to be a pushover for biplane articles, which in this case took longer to prepare than actually building the model.

Getting back to the real thing, the Udet Flugzeugbau (aircraft factory) recognized the need for a training bipe in the mid 20s and produced as a result the Flamingo. More accurately known as the U-12 (Udet's 12th design), it came in a variety of versions, including a seaplane with twin floats. Over 300 were produced, apparently including some in Austria, Hungary, and Latvia. This info plus lots more can be found in the aforementioned Profile, or the book 'Messerschmitt, Aircraft Designer', by Armand van lshoven (Doubleday & Co Inc, Garden City NY, 1975). How Udet and Messerschmitt are related from an aircraft building/design standpoint makes for interesting reading. This book, by the way, also has a bunch of pictures of the Flamingo.

(Udet established fame as an aerobatic pilot between WWI and WWII, flying at many air shows in Europe and the USA. For some period he was flying a Bucker Jungmeister. In fact, it was his Jungmeister that was being brought to the USA aboard the Hindenburg in 1937. Obviously, that was its last 'flight.' wcn)

The model was scaled up from the 3-views provided in the Profile and is from an outline standpoint as accurate as one can make it by using dividers. Without using any scientific approach, I elected to enlarge the 3-views nine times, which seemed to make the model about the right size for a .40 engine. Besides, it makes it about 2 in=1 ft scale (1/6-scale), allowing the use of various commercial components such as wheels, pilot, etc. Only one concession was made. I incorporated a simplified steerable tail wheel instead of the prototype tail skid. Both are shown on the plans, so take your choice.

Being my first R/C scratch-built Sport Scale ship, I was obviously anxious about how well it would fly. Some taxi tests on the driveway revealed excellent ground handling qualities, meaning no nose-over tendencies. Really had to resist the urge to pour the coals to her for an off-the-street takeoff! Sanity prevailed, however, and the maiden flight was made (with family in tow for encouragement) at the local model airdrome.

Flight performance turned out to be excellent, which really isn't surprising considering it only weighs 5-1/2 lbs with about 900 sq in of wing area, putting it into the trainer category. I've had lots of flights with it, including several contests where it gathered 92 and 90 points in static and placed 2nd overall in one.

For power I use a K&B .40 with Perry carb and DuBro muffler, which is more than ample power. Neat would probably be the Saito (sold by Hobby Shack) FA-30 4-cycle glow engine, which with its unique sound would be most appropriate.

I don't think the original designers had the modeler in mind when they came up with the real one, even though the fuselage is nothing more than a box. Only real difficulty (if you want to call it that) is caused by the dihedral and sweepback of the wings, which need some care to insure proper alignment..."

Quote: "Hello, This what I came up with for the CG location on the Flamingo. I haven't done this in a longtime, so please be advised. Best wishes," 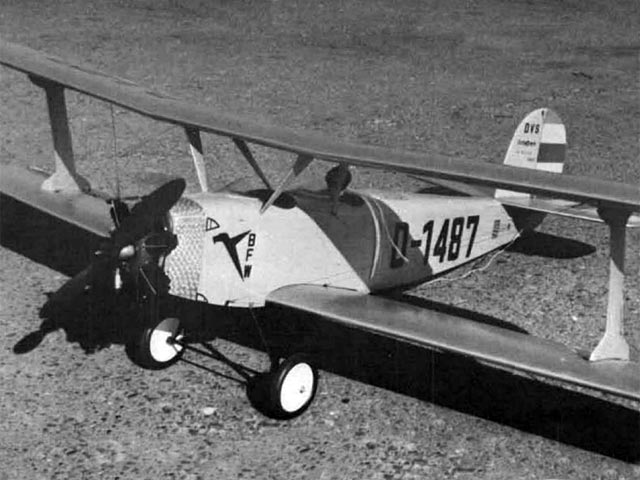 Hello, I can't locate the C.G. position on the plans PDF. If anyone has built and flown the model or if you can calculate the C.G. would you please post that. Thank you very much for your help.
JeffGreen_LasVegas - 08/05/2020
Add a comment