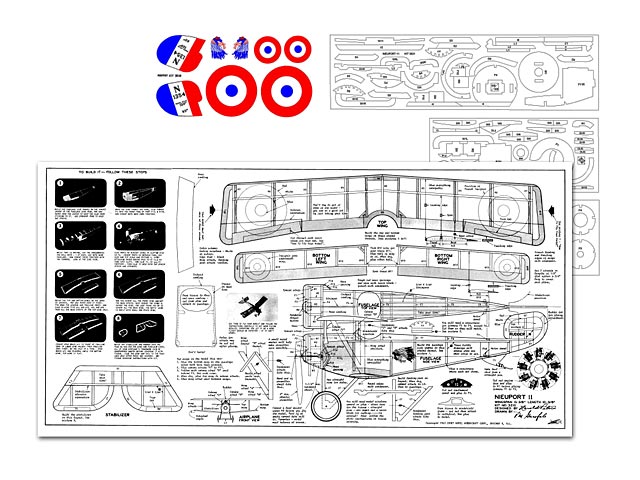 Update 05/06/2014: Replaced this plan with a clearer copy that also now includes printwood and decals, thanks to engineer.

Quote: "The current posted plan on Outerzone is great, so the only thing I did was to clean-up a few dark lines at the paper fold. Printwood found another site included a sheet from a Bellanca kit, so that was erased. I traced over the die-cut lines and replaced text with clean lettering. The things I do to have fun... I built it as a kid a zillion years ago, and it didn't fly very well. I knew nothing about weight, balance, and decalage. So, fix the top wing incidence angle per the modern accepted amount, and it should fly just fine." 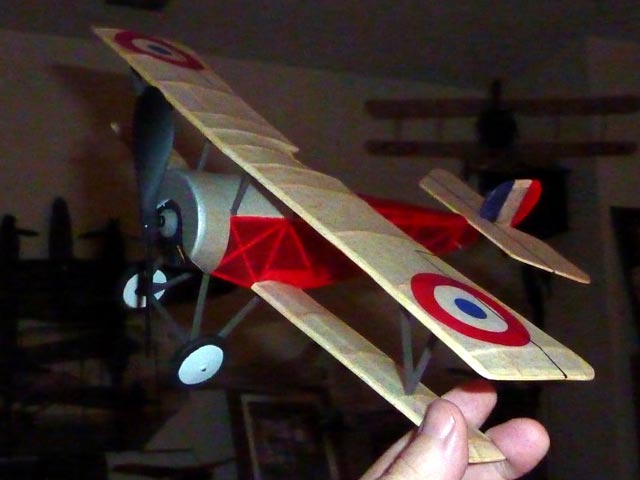 Was reading about Jean Navarre...France's first ace, 15 victories...severely wounded...seems he painted his 'Bebe' red in order to "bait" the Germans to come up and face him over Verdun (1916). Obviously he became very popular with his countrymen viewing from below. Although all the French aces flew the Nieuport 11 at one time, Navarre was easily the most celebrated...a devil-may-care hell-raiser of the Paris night-life...and good friend of Charles Nungesser (a kindred insubordinate soul).
Navarre switched to flying a Nieuport 16...which was an up-engined "11"...le Rhone 9J 110hp (French built) that utilized a synchronized Vickers.
After the end of hostilities, a victory parade was planned on the Champs Élysées on 14 July 1919. However, the high command ordered airmen to participate on foot rather than flying their aircraft. The headstrong 'heroes of the air' took this as an insult. At a meeting in the 'Fouquet' bar on the Champs Élysées, they decided to respond to this affront by selecting one of their number to fly through the Arc de Triomphe. Navarre, as the first among the aces, was considered the ideal choice despite his injuries. Tragically, however, while practicing for this stunt, Navarre crashed his aircraft and died at Villacoublay aerodrome on 10 July. He was only 23 years old. Fellow pilot Charles Godefroy would eventually perform the historic flight through the Arc de Triomphe a few weeks later on 7 August 1919.
There are those who speculated that Jean Navarre was a victim of the war, that his death in a flying accident was actually a suicide. There is little doubt that his personality certainly changed. Along with his good friend Charles Nungesser, he'd been a hell-raiser, a chance-taker, and a lady's man...living for the moment. When it all caught up with him, his status as France's leading ace was established...in fact he was France's first double-ace. His wounds were very serious...and then he lost his brother to the war...and suffered further mental and physical setbacks. Finally, he regained active duty status...flying once more...when the war ended. He was then employed by Morane-Saulnier as a lead test pilot...but the zest for life had ebbed away. Accidents happen...but he was a very respected pilot. So who knows the real ending to the story...except that it would have been very nice had he had the honor of flying through the Arc de Triomphe on the big day....
Model is constructed courtesy of Comet Nieuport 11 (oz3962) plan from Outerzone. Thank you, Steve and Mary.
Neal Green - 22/05/2021
Neal, thanks for sharing another terrific model and wonderfully informative slice of history. Your postings are always a delight. In the same vein (forgive the pun), von Richthofen's infamous Dr.I was painted its familiar blood red to similarly bait the enemy.
Jan Novick - 23/05/2021
Thanks Jan. The next time you’re in Paris, just drop on over to Fouquet’s on the Champs Elysees, more specifically the Bar de l'Escadrille, where the “plot” to fly under the Arc de Triomphe was hatched in 1919…you’ll find Navarre still there with his friends. Of course, he’s now a photographic portrait hanging on the wall behind the bar…but he's still there at his old haunt. Oh, and don’t forget to take a well-stocked wallet.
Neal - 23/05/2021
Add a comment