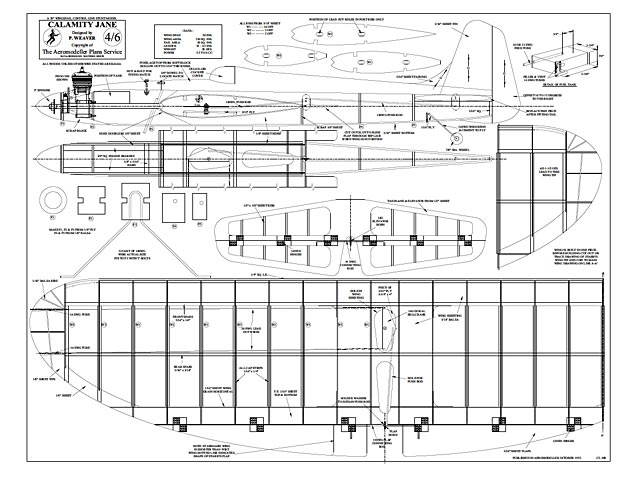 Quote: "THIS model is the end product of four years of fairly successful stunt flying, and incorporates many features from various famous commercial designs, plus a number of original points, to make it the ultimate in control-line stunt. In this country, the obvious trend is towards smaller wing area, fast flying 2.5 cc model; but elsewhere, particularly in the USA, Australia and South Africa, the large area model, as typified by Calamity Jane, is the current vogue.

Here is a model for any 5 cc motor, that will also go through the book with a 3.5. The original has alternated between DC 350 and Frog 500 to give top class results with either, and the designer would go so far as to speculate that an Elfin 2-49 might do the trick. With such a wide range of potential power units, 'Jane' fills a gap that has long been evident in this country, and we venture to state that she will be very popular with our readers.

As for successes, variants of this design are universally flown by members of the Newtown MAA, the crack stunt club of Queensland, and by the Dalby MAC, one of whose members won the State championships with such a model. Perhaps the construction is a little more involved than average ; but if you decide to build it, you will be well rewarded for your trouble.

Construction. Start the fuselage by cutting two sides and adding nose doublers, notching for flap and horn to pass through. Bolt u/c to its bulkhead, and assemble sides on to it, and the other ply F-2. Bring rear ends together with a 3/16 in spacer, then set aside. Make up full length wing spars and LE and cut all ribs from medium 1/16 in. Assemble them on to one main spar and pin over plan, with spar underneath, block up up fore and aft, add other top spars, turn over and add LE and other spars. Trailing edge, tips, belicrank platform and sheeting follow in sequence, then cut flaps, add horn, and hinge to wing, making certain that the horn is on top. Bend an accurate push rod, connect with lower flap horn hale and hencrank to find best location of pivot hole on platform. Drill, and bolt bellcrank in place after lead out wires are attached. Remove push rod and add centre section sheeting, all cap strips, lead out guides and 1-1/2 oz tip ballast. Cut holes in centre sheeting, sand well, cover and dope, give at least two coats and check warps.

Elevators are from soft 4 in. sheet, sanded symmetrical with centres cut out and ribs added. Horn is made up of 14 g. wire and brass, attached to elevators and the whole assembled with tape hinges. Now slide wing through fuselage and cement secure, replacing parts slotted for flap and horn access and flap push rod. Lay elevators in tail end, pin level, and also pin flaps neutral before bending elevator push rod. Fit rod, and slide elevators to obtain precise neutral, then cement securely. Slide engine bearers into place, Britfix is best for this joint, install tailwheel and cover bottom with 3/32 in. sheet. Lightly cement top blocks in place, carve to shape, remove and hollow out as much as your patience allows. Cut a slot for the sheet rudder (with off-set), and add blocks and rudder in one go. Front block is detachable, keyed by dowel, and held in place with cycle spoke or bolt. Fuel proof tank department, fit motor, add nose ring, F-1, and other cowling blocks, fit tank and canopy - and you are ready to dope and colour trim.

As for flight tests, just be careful, feel your way into manoeuvres and soon you will be thinking of challenging the Hewitt's. Lines should be around 60/65 ft long."

Quote: "Calamity Jane is a 50in wingspan stunter for 2.5 to 5cc engines designed by Peter Weaver from Australia. The reason for the Aeromodeller having such interest in this particular design is that is had had a large number of contest successes in the hands of the designer and others. The original was flown with engines ranging in power from a DC 350 up to a Frog 500, and the designer thought that even an Elfin 249 would do the trick. Design features are freely attributed to Bob Palmer which is not really surprising considering the contributions Bob made to CL flying at the time. It is, however, nice to see the acknowledgement. Overall a nice design which would make a good build. As with all my plans they are but tracings from scans of the original magazines articles and may well contain errors. If you chose to build from them please do a lot of measuring and double checking before knife application." 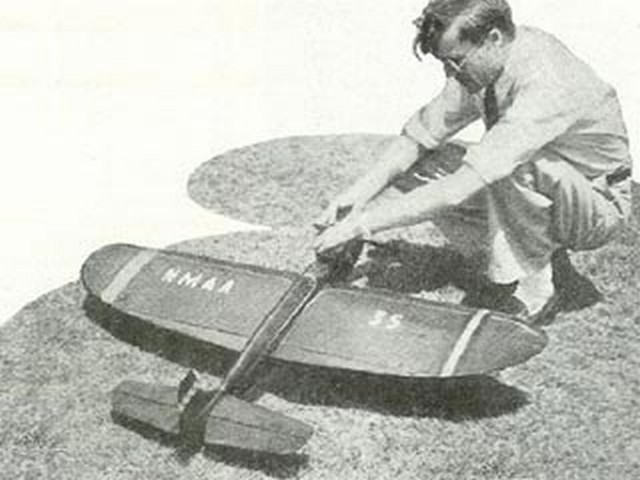