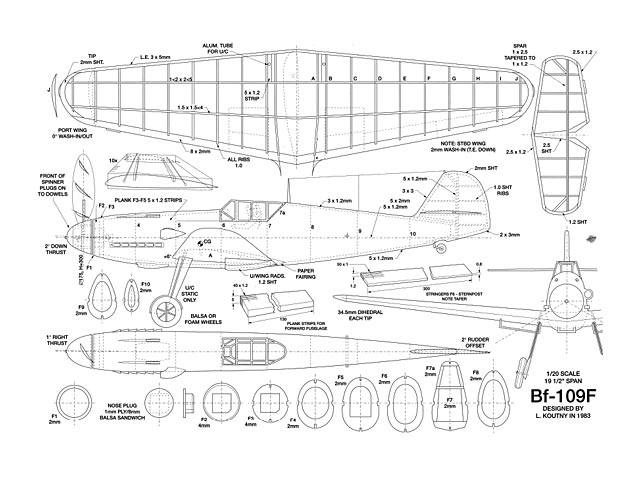 This plane was one of the most beautiful fighters of WW2, if such instruments of destruction can be said to be beautiful. It's designer, Willi Messerschmitt, said that it was his best job, with not one kilo of unnecessary weight in it. It was lighter, faster and more manoeuvrable than any of the other members of the Messerschmitt family of fighters.

I made my 1/20th scale version in 1984 as my third scale model, whilst enduring a bout of immobility, having sustained a broken leg. The flight performance was far better than previous projects and with perfectly scale outlines and my best workmanship, it was considered to be as good as you could get, using coloured Modelspan.

The complicated camouflage scheme on the wings, the mottled fuselage colour and numerous marking details and emblems were all razored from Modelspan, using Green's 'Fighters, Vol.1' as reference. This finish could not be achieved by airbrushing - the weight was absolutely minimal.

The structure is designed so that additional ballast in the nose should not be required. Note that the starboard wing has a small amount of wash-in, whilst the port wing is built true. The wing incidence to fuselage datum is large, so that prop downthrust is minimal (increasing prop efficiency) and the sit of the aircraft in the air (tail high) is correct. This latter trait being good for spiral stability.

BUILDING TIPS: Select your wood very carefully. Use only light, but firm stock.There isn't a lot of wood in the model, so make sure that what you use is top quality.

Wing ribs are cut using the sandwich method, between ply patterns. Make sure that the spars are from the strongest stock. Balsa blocks are set into the lower surface to support the paper tubes for the static mounted bamboo stick undercarriage legs. I made the wheels from balsa, but blue foam can be used.

Take the time to make up a three bladed prop. The plan details the blade profiles and angles (see page 24 for step by step diagrams).

The nose cone is removable for winding, and located by a tight push fit on short bamboo dowels. The nose block is made up from soft balsa and two ply plates, which keep the thrust axis. Make up the Czech hook shown on the plan from 0.8mm piano wire.

The top surface tissue is cut in the correct colour segments, laid out flat on polythene sheet and glued together, hot ironed and then glued to the structure. The tissue is tightened using three coats of very thinned dope.

All scale detail is cut from coloured tissue and stuck on using thinned glue. Make up all the hard detail (radiators, carb inlet, guns, etc) from balsa and glue them on to the covering.

The canopy was moulded in the oven from 0.15mm celluloid - don't forget an instrument panel and pilot!

For the motor, I have found that a single loop of 6 x 1 mm FAI Tan II, 600mm long works very well, if the weight of the model is under 30g (the prototype was 26g). Make sure the motor is well lubricated.

TRIMMING AND FLYING: Check that the wing twist is as per plan. The prototype was trimmed to fly left/left. Make sure that the CG is correct - over the main spar! The model should either glide straight or with a large open left circle. Start with about 300 turns on the motor. The model should fly horizontally in a 30m diameter circle - if the model goes up/down, increase the downthrust; if the model turns in a tight left spiral, increase the right thrust. If everything is OK, increase the turns to 600. now the model should climb in an open left circle, the diameter of which can be controlled by the rudder. OK? - Try more turns, say 1000, now the climb should be very rapid. If it climbs well in the first half of the of the circle but comes down in the second half, induce some wash-in on the port wing. If everything is OK, put on 80% maximum turns (about 1400 turns).

The climb should take it to a height in excess of 50m, with a dead air flight time of about 80secs. I have used this model indoors with success, but principally it is an outdoors model. It first flew in 1984, but I still won an outdoor competition with it, in 1993!" 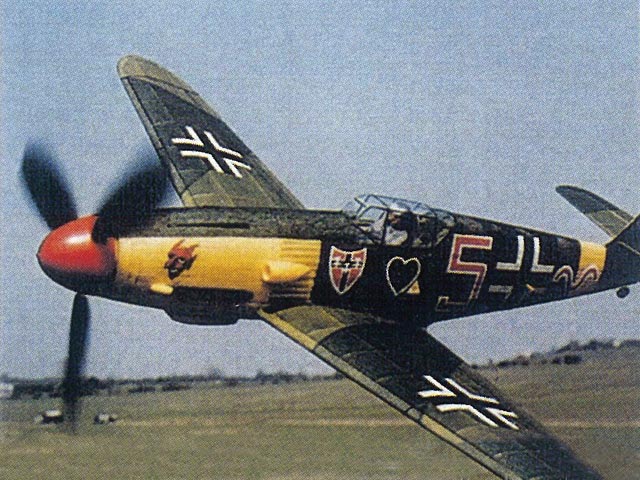