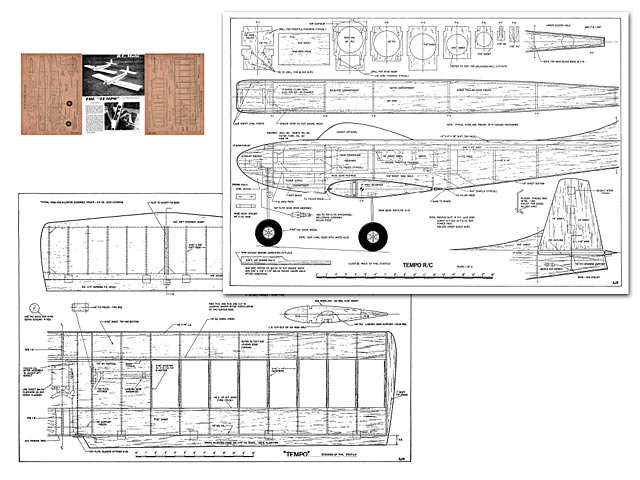 Quote: "Radio control of model aircraft is progressing rapidly in the areas of radio systems, model aerodynamics, construction techniques, materials, and flight characteristics. Hence the suggestion for the name 'TEMPO' for the subject R/C project. One definition given in Webster's - rate of activity in general, as, the tempo of our (R/C) age.

Many hours of thought, building, and flying have gone into the evolution of the design. The objectives were to achieve an aircraft capable of performing the current flight plan of aerobatic maneuvers, simple in construction, and versatile in accepting the various radio installations of today.

The advent of proportional systems did not highlight the requirement for any design feature in particular, but did underline the need for good inherent stability. While a proportional system does enhance a model's smoothness in flight, the basic ingredients of good directional, lateral, and longitudinal stability make it that much better. And, of course, the occasional mysteries of momentary malfunctions are less noticeable with a stable airplane.

Taken in the order listed, the considerations for the directional stability were good ground handling, adequate vertical tail area for heading control, and relatively powerful rudder effectiveness for the wing over and spin maneuvers.

It is not uncommon to see an R/C ship have trouble in performing the ground maneuvers when there is a good breeze blowing on the runway surface. This is usually caused by very strong directional stability (weathervane stability) and requires a great deal of rudder to offset the effect of the aircraft trying to align itself into the wind. More rudder is usually added and the cycle repeats. The proper proportion of vertical tail area, then, does become important as illustrated by this example.

For the lateral stability consideration, dihedral angle is an important factor. The value of 3 degrees, has been the result of experience with decreas-ing values until the response to a lateral input (roll) was considered satisfactory. A relatively small dihedral angle also helps in performing the spin.

For the longitudinal stability consideration, adequate horizontal tail area is a strong factor. The approach here is to keep paring down the percentage as much as is considered desirable. When the a/c will hold a given pitch attitude without noticeable deviation, then that is just a bit too much paring.

Sufficient wing area has been incorporated to keep the wing loading at between 18 and 19 ounces per sq ft. The landing speed is not unreasonable with this loading. The success of a good design lies in the wing, therefore, considerable effort was applied here. From flight test experiments with the use of non-symmetrical airfoil sections with considerable thickness ratio, it was concluded that certain maneuvers suffered. In particular, the vertical eight maneuver was found to fall to one side in the top of the maneuver. More power helps here, of course, but it was concluded that the drag of the wing is a major factor. For the Tempo wing, a symmetrical section with a reasonable thickness ratio was adopted which has proved rewarding. I really credit Hal deBolt for this one.

It has also been noticed, that the amount of aileron angle throw needed for a given flight maneuver, has been much less when compared with the non-symmetrical, thick airfoil wing. In other words, less aileron angle was required for a given roll rate with the section shown.

To date, three aircraft are in flight status; the initial, features the constant chord wing. The second and third aircraft were built with wings having an 80% plan form taper ratio. A tapered plan form wing was also built for the number one aircraft and some interesting conclusions were drawn from the comparative flight tests, I became convinced that the taper plan form provided more pleasing lines but offered little in tangible benefits in flight characteristics. The taper plan form did increase the roll rate (there being less damping) and would, on occasion exhibit evidence of tip stall. Since the roll rate was more than ade-quate with the constant chord wing, I decided in favor of the constant chord (it sure is easier to put together, anyway!).

For this aside project with the various wings, a jig was constructed and proved extremely helpful since it removed the chore in wing construction. The wings were true and uniform, the weights varied between 15 and 16 ounces, for the basic structure. Tempo No 1 currently has a Super Tigre .56 installed. This too, has been an interesting experiment. The .56 seems to do a bit more for the aircraft with respect to performance. The take-off run is shorter and the maneuvers seem to require a little less effort. The mill gives the impression of loafing. I suspect the gain may be due to the ability to swing a 12/6 propeller. An 11/6 was used with the initial Veco powerplant. The beam mounting shown will accept the Veco, Merco .49 or .61, and ST-series with attendant changes in the bolt patterns. For the larger displacement engines, a 12 ounce tank should be considered while an 8 ounce will do for the .45 engines.

The Tempo has been flown with the Dee Bee and Sampey proportional systems and at the time of writing, the Bonner Digimite is being installed.

A detailed description of the building sequence will not be attempted since the project should not be at-tempted for an initial R/C effort. The following comments are offered in particular areas where a bit more descrip-tion may be helpful..." 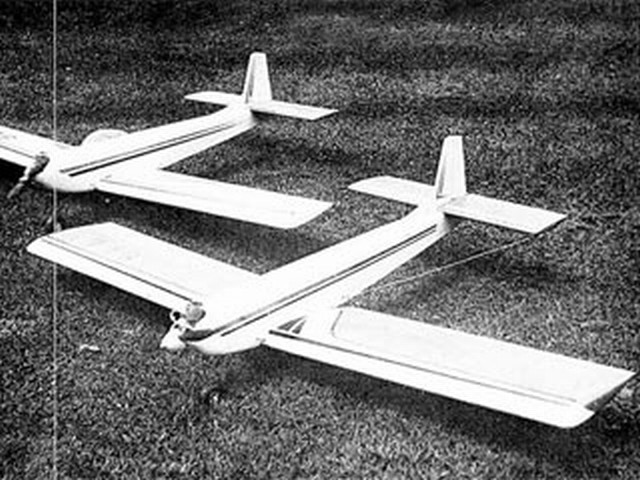