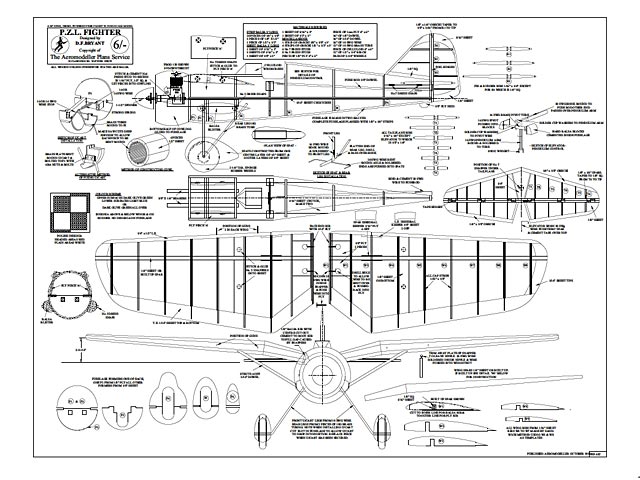 THE little 35 ft span Polish fighter produced by I the Panstwowe Zaklady Lotnieze, the Polish National Aircraft Establishment of pre-war days, was chosen as a subject for free-flight after Mr Bryant saw the Comper Swift (oz3262) by DP Golding in the February issue. Plans were scaled up from Aircraft of the Fighting Powers with all surfaces to correct scale. Subsequent flight tests found the diminutive tail inadequate, so slight deviation from scale is necessary in tail area. Since March, the prototype has made almost 100 successful flights, and apart from one unfortunate mid-air collision with a sailplane at 510 ft over the runway at Fairlop, all flights have been made without undue event.

The P.24 (full-size) was armed with four 7.7 mm guns in the wings and fitted with racks for light bombs. Alternatively, two of the guns could be replaced with a pair of 20 mm cannon. its top speed of 267 mph and range of 435 miles hardly compare with performance of the modern interceptor; but as an attractive subject for modelling, it has few rivals among the post war breed.

Fitted with a Frog 150 diesel, and with press-stud attached silk covered wings, and tail unit, the prototype has already influenced some of designer liryant's South London Scale clubmates to produce duplicate models. High wing and power loading mean that its flying speed is relatively fast, yet certainly not in the flying brick class. Rather, the extra airspeed adds considerably to its realism in flight.

Full building instructions are issued free, with each full size copy of the 1/5th scale plan opposite, from APS."

Quote: "The next one up is the PZL P24 Fighter designed by D. Bryant. I am not sure if this is the Dennis Bryant or not but the plane is certainly worthy of him. The model is 36" span, 1.5cc powered, scale model of the Polish Fighter plane. It has knock-off flying surfaces and a pendulum controlled elevator. An interesting build and certainly one for consideration if you want a small, realistic, radio job ...As always my drawings are but tracings of blown up scans and may well contain errors, please measure twice before committing to any knife work." 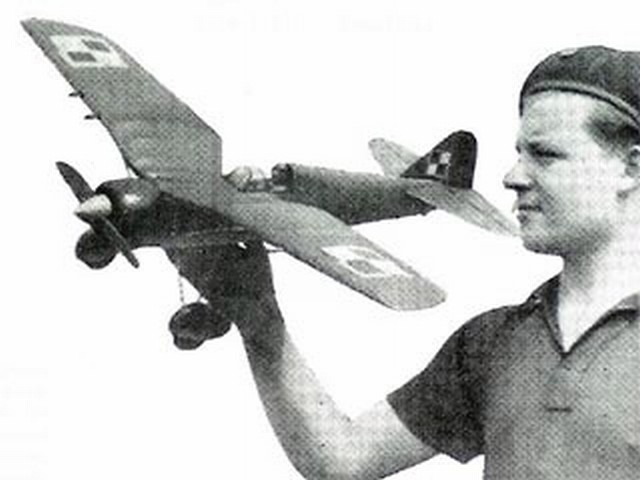