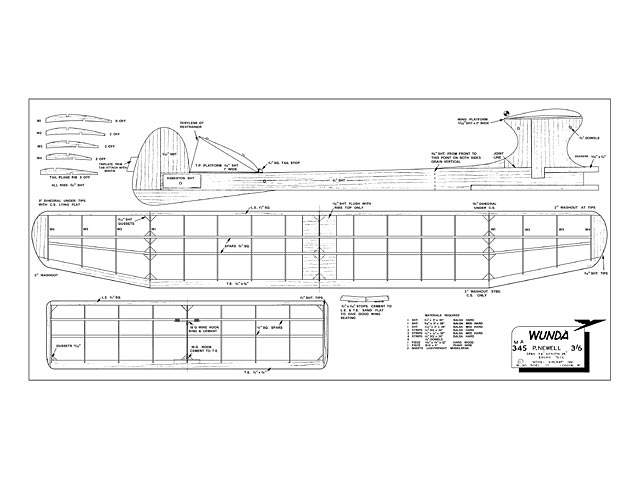 Quote: "A simple design for the new .049 power class. Ideal for beginners 1/2A Wunda by P Newell.

IMMEDIATELY the .049 power I contests appeared in the calendar, I decided that here was a class where everybody was starting from scratch and consequently the chances of success were higher than for any other F/F event. A test model, using a Mills .75, was designed to explore the possibilities and thus 1/2A Wanda grew on the drawing board. Time being limited, construction was kept simple and consequently the design is ideal for a first contest power model.

The original was completed in six evenings and flight tests followed immediately. After initial trimming the model was turning in 90 sec. flights following to see. motor runs, until a rough landing broke the original built-up fuselage, and so the all-sheet version shown on the plan was built. This second fuselage was in. longer than the original as it was felt that the CG was too far forward. All-up weight with the new fuselage was just under 6 oz, yet the model still climbed to quite a good height, and duration, after a few minor adjustments, went up to around 2-1/2 min.

I then decided to fit a proper timer and cut-out in place of the coil of fuel tubing, so an Elmic Mini-Diesel combined timer and cut-out was fitted, and a Dunlop french chalk container provided an ideal tank. An unexpected difficulty was encountered in the form of a delay between the cut-out operating and the engine stopping. This was caused by the low fuel consumption of the Mills,which continued to run on fuel vapour within the crankcase, but a different oil content in the fuel eventually caused the engine to slow down and stop approximately 1 sec after the cut-out had operated. In flight this 'lag' gives a very smooth change over from power to glide, and in fact some timekeepers have complained that they cannot tell when the engine cuts !

All that now remained was to find the best propeller, and although wooden 7 x 3 Stants gave excellent results, they were abandoned because every landing meant a new propeller. I therefore tried a Keilkraft 7 x 4 nylon, and surprisingly, the climb improved so that 3 min maximums became possible.

Construction. This has been kept simple and should not present any problems to anyone. If a 0.5 cc engine is used, lighter grades of wood should he selected, but with a 0.75 cc motor, strength is more important than weight, provided the latter does not exceed 7 oz.

Fuselage.This is made from 1/4 in sheet with the bearers let in flush and spaced to suit the engine used. Particular attention should be paid to the joint where the pylon is keyed into the main fuselage. The extreme rear of the fuselage is sanded down to the fin thickness and the fin then attached..."

Update 13/03/2019: Replaced this plan with a clearer copy (patterned background removed) thanks to TonyP. 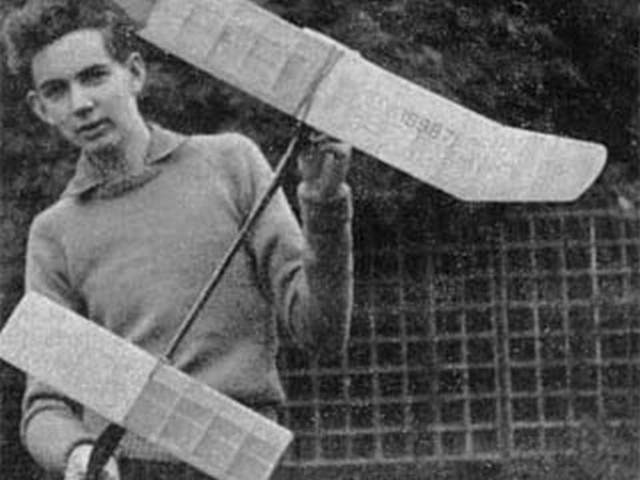