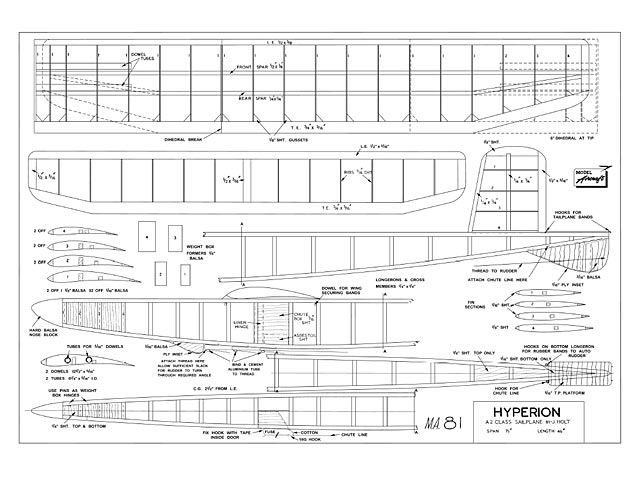 Quote: "THIS model was designed in October 1949, to the Nordic specification which was then being discussed. The object or the design was to produce a job capable of giving a good account of itself in any weather conditions that were likely to be encountered. It was extensively test flown over the winter months and showed itself-capable of an average of just over four minutes in still air.

In the first competition for which it was entered, the 1950 Pilcher Cup, it took second place. This competition, as readers will probably remember, was flown in a gale, but in spite of this unfavourable weather the model went up straight on the towline and flew in steady circles when it came off. Unfortunately, the towline (of waxed fishing line fitted with a rubber tensioner) was not strong enough to take the model up under these conditions and it snapped on each of the three flights before the model was able to reach a reasonable altitude. It should be noted that the model was still in perfect flying order at the end of the competition, thus showing its its robust construction and general airworthiness.

Fuselage. The sides are built on the plan in the usual manner, fairly hard 4 ft wood being used for the longerons and medium for the uprights. The sides are then joined at the rear. the weight box formers added, followed by the cross-pieces. Bind and cement the towhooks to the 1/4 in square braces and fill in with 1/8 in sheet either side. Complete the remainder of the sheeting, then fit tailplane platform...."

Update 12/11/2015: Replaced this plan with a clearer copy (patterned background removed) thanks to TonyP. 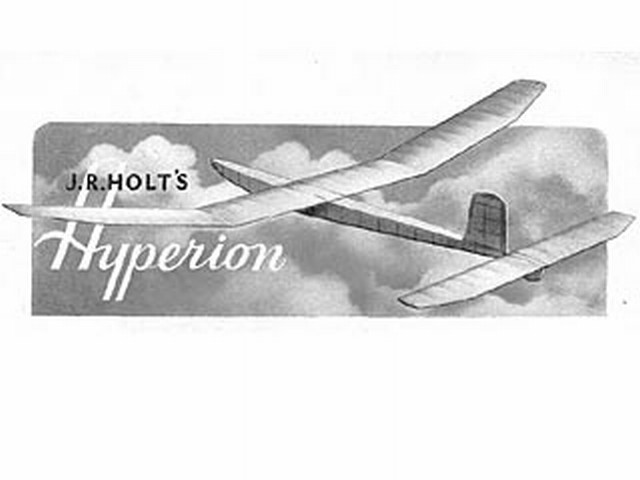 I'm sending you two photos of my new HYPERION glider, built from Outerzone plans last month [more pics 003, 004]. Hyperion is certainly an ugly design when you see it for the first time. But when you become acquainted with its design, you love it. It is simple and efficient. Many modelers of Cekia use it in National and International contests. So, when I saw it last year at European Old timer Contest, I decided to built it. I have enlarged the plans at 150 percent, now it has a wingspan of 270 cm. Now I have flown it only few times, but already I like it. The bigger model is more efficient than the original 170 cm, so I am progressively putting the CG back for better response. I use the regular 100 mt wire (20 spring and 80 wire) and I am satisfied with the model. Best regards, thanks for Outerzone
Luigi Carlucci - 22/09/2019
Add a comment