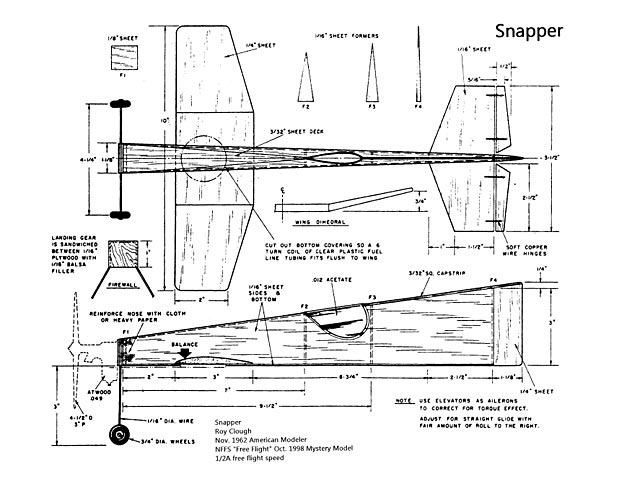 Quote: "Ever since the first half-A engines appeared we've thought it would be a riot to stick one on a ten-inch wing and turn the contraption loose. We finally pared some wings down to mere stubs on an old free flighter and tried it. It was a riot - a short-lived one.

After we swept up the balsa wood (never leave the pieces in a hayfield - it's bad for cows) and cleaned the turf out of the engine we came to the conclusion that a free flight speed job would have to be a carefully tailored affair. The wild corkscrew gilhooley and painful thump of the clipped down free flighter had given us a lot to think about.

A model intended to reach high speeds in free flight must have:

(1) a high degree of directional stability
(2) a sharply limited motor run
(3) no tendency to climb or dive under slight variations in power output, and
(4) be light and very rugged.

In order to obtain these characteristics we must:

(A) find some way of managing a whale of a lot of torque with a small wingspan
(B) limiting the motor, run reliably without a timer mechanism
(C) making the model insensitive to gusty weather, and
(D) using the lightest and most simple geometry consistent with adequate strength.

Snapper is rakish, but, except for the cockpit, styling had nothing to do with its appearance. It's designed that way because that is the shape that will best do the job.

Any built-in offsets in thrust line, wings or control surfaces are out. It doesn't take an engineering degree to figure out the reason. The model is light and it goes like a devil with his tail on fire. You'd never get a chance to balance off wing incidence by varying down thrust or to use any of the usual free flight adjustment tricks. The wings, stabilizers, fin and thrust line must be substantially parallel to each other. Dihedral angle raises the tips of the wings and this raises the center of resistance. We have to counter it by raising the thrust line a little above the wing..."

Quote: "Was working on my storage area and came up with some NFFS digests. The October 1998 issue had this plan from the November 1962 American Modeler. It's the Mystery Model for the month, but it is revealed in a later issue that it's Roy Clough's Snapper, meant for 1/2A free flight speed. That's a lot of power for a 10 inch wing span!" 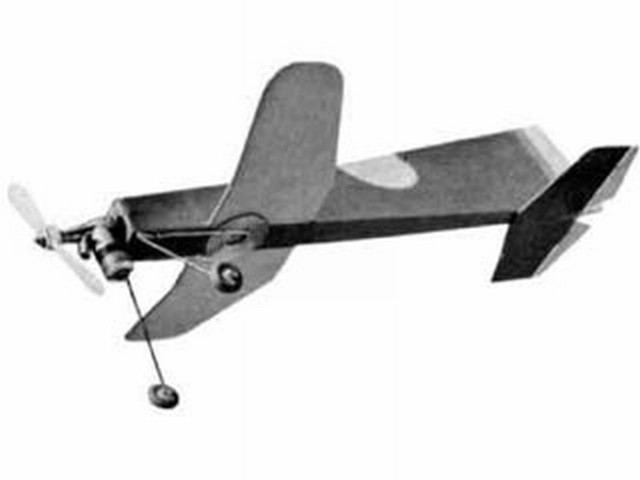