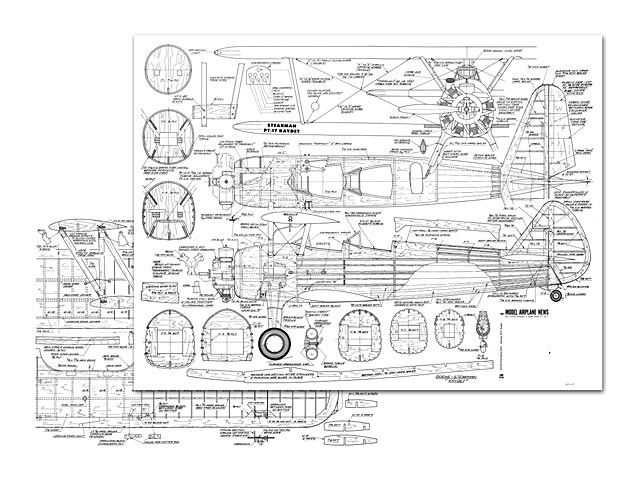 Quote: "Scale control liner of one of World War II's trainers that put plenty of our fledgling fliers into the air. Like all bipes our trainer has all the excitement and glamour for good scale flying. Stearman PT-17 Kaydet, by Don Carkhuff.

We'll leave the multi-engined, bomb dropping, gear retracting ships to the fellows that can endure this type of frustration. We like them simple and easy to fly and believe that it is better to build a small ship to a large scale than vice-versa. In this way we do not all have to be watchmakers to get the small detail, and our ships are not huge models that are difficult to transport.

Our Stearman falls in this category: An airplane reasonably simple to construct and fly. One that looks good on the ground as well as in the air.

The original model was scaled from two Stearmans that have been kept at one of our local airports. This then accounts for some of the differences in the construction detail between the photos and the drawings. These ships were probably rebuilt several times, and I confess that the original model suffered a crackup at the 1960 Mirror Meet and was also rebuilt. The mishap was due to the builders' inexperience in control-line flying and by a slippery runway.

The drawings for the model show the construction as the airplane would have appeared factory-built back in 1942-1944.

The Kaydet was the last biplane built for the Army and Navy and was the standard primary trainer for these Services. At that time, its color scheme was all silver. Other color schemes were yellow wings and tail with blue fuselage for Army, all yellow for the Navy ('Yellow Peril' as it was named) and of course, any color scheme for the surplus.

The radial engine was first intended to be covered by a cowl to hide the K&B head. However, it was found that the cylinders from Monogram plastic kit of the Curtiss Wright radial engine were practically to our scale. Parts of this kit were used to build a radial engine (Lyeoming) that provides a 'spectacular' front end for the Kaydet, even with one oversize K&B head protruding.

The original model had only a detailed rear cockpit, the front houses the bellcrank, which was camouflaged by, the use of half the figure of a modified plastic jet pilot making for further realism in the overall picture.

All full scale flying and control cables were made of 1/2A flexible lead-out wire, These wires were spring-loaded to prevent any possibility of sagging. Wing tip lights were taken from a ship model - very convenient and real. All details are fully described and covered in the full-size plans, per se - exact size of N struts, type of material to use, etc. Adherence to the plans will result in a sturdy, good flying. exact scale-ship.

One point to remember, do not take the chance of damaging or destroying your labors by flying a tail heavy biplane; bring that nose down by adding the required weight to secure the proper CG. The winter 1961-1962 edition of Air Progress magazine can give the builder additional scale detail.

Construction: The construction of this model is not as difficult as it is time consuming, mainly for the reason that most biplanes designs depend on the cabane and interplane struts as the method of attaching the top wing, leaving the rigging as nothing more than scale decor.

On our model, both the struts and rigging are used in the same manner as the prototype. The struts align and locate the top wing (as well as securing it) and the rigging (in tension) tie the two planes and the fuselage together in a rigid unit. As you can see on the drawings, adequate means have been made through-out the air-frame for securing the rigging, These provisions, mainly cotter pins and the strut mounting fittings, are the only taxing part of the model. This arrangement has another virtue other than its strength; it provides a method of assembling the top wing, the rigging and interplane struts after the final finish has been applied.

Fuselage. Start by cutting out the 1/2 inch plywood motor mount (be sure to drill hole for hellcrank) and formers F1, F2 & F3. Cut these formers in two halves by cutting along the horizontal center line and gluing them together again with the motor mount in place. Install the fuel tank now. The landing gear and cabane strut plates are now added. Do not glue strut plates at this time and be sure to bevel landing gear plates so that they rest flush against motor mount..."

Update 08/04/2015: Replaced this plan with a clearer version (scanned from full size) thanks to dfritzke. 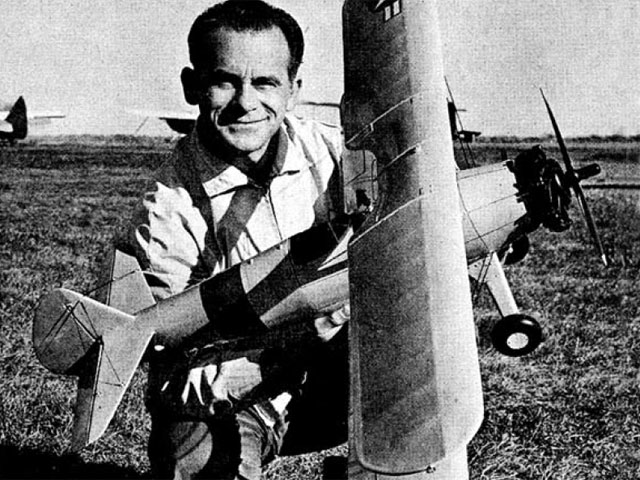 Watch out for the somewhat inaccurate drawings of the fuselage formers on this plan. I'm drawing them electronically for laser cutting, and it's becoming apparent that if I were doing this the old fashioned way with a knife I would have to adjust a lot of notches to make the stringers line up straight during assembly. Other than that it's a really nice plan.
RobReynolds - 29/09/2015
That is my dad, Edward L. Price [main model pic]. My uncle is Donald Carkhuff. My dad flew the PT-17 at the NATS. Both my Dad and Uncle designed the scale model and my dad built it in our Hobby Shop that we owned. Please add my dad's name under the picture of him holding the PT-17. Thank you,
Keri-Ann Price - 16/11/2021
Got it. Have added Edward L Price as designer on this plan, now. Many thanks,
SteveWMD - 16/11/2021
Add a comment