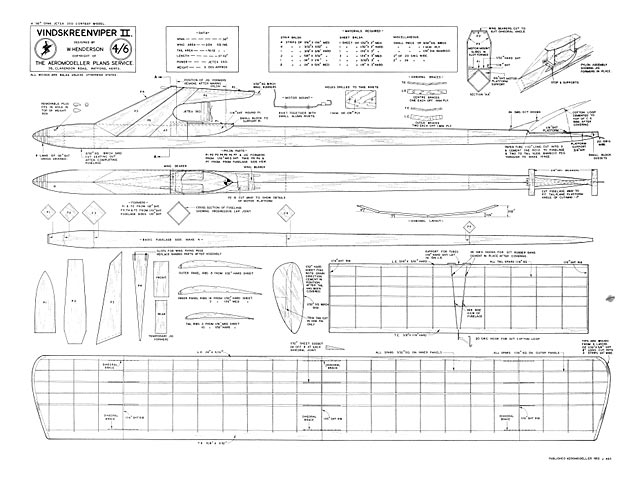 Quote: "DEVELOPED as the eighth of a series, known as 'Puff Adders', this model was designed at the beginning of the 1951 season. The third in the series had placed third in the 1949 ICI Challenge trophy with 3 mins, 4,S secs. on a 28 secs. power run, and the 'viper was created with the object of placing even higher in the same event for 1951. It began life with immediate success in the form of a first place in Concours d'Elegance at the All-Herts. Rally, followed by a qualifying flight of 3:20 on an 11 sec power run.

Next success came with top place in the newly introduced SMAE Jetex contest on 2nd September, when after two mediocre flights, the 'viper made a 24:1 ratio flight to gain an easy first. Unfortunately, the model sustained damage during the SMAE contest, which affected trim so much that the 'viper's Challenge cup performance was far below par. The normal duration is between 90 and 120 secs, on a single 350 charge.

Construction. Fuselage. Four identical fuselage sides are lap joined, then the motor platform is built up, complete with stop and supports and fitted to the diamond fuselage. The sketch shows how jig formers are used to construct the pylon. P.7 and P.5 are fitted first, then P.3, P.4 and P.6 in that order. The tail position can now be cut away, and platform parts fitted , also the birch skid at the nose.

Wing and Tailplane. Construction is entirely conventional and needs no explanation. Cover the entire model with Lightweight Modelspan; the original was finished with black fuselage and white surfaces. Total weight should he in the region of five ounces, the CG should be at 75 percent of the chord from the LE..."

Update 26/12/2017: Added 400dpi bitmap scan thanks to DBHL, theshadow. Shuffled the files around so now this is the main plan file, and hogal's excellent PDFvector tracing is a supplement. 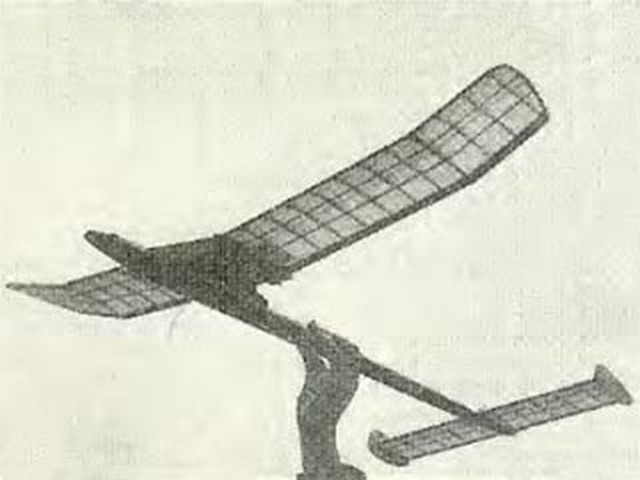