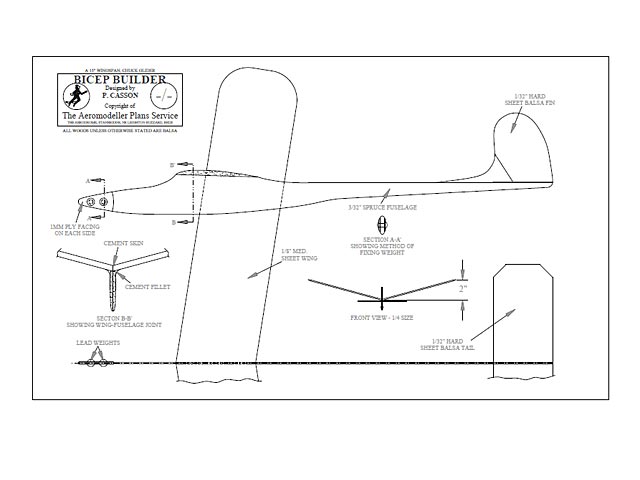 Quote: "Yes! Why not? With everything in our modelling world becoming more and more complicated it is a welcome change to return to one of the more simple forms of flying. And for those who derive pleasure from the skill of physical effort lies the satisfaction to be gained from the efforts of a first-class throw. Bicep Builder, by Peter Casson.

THE chuck glider is often regarded as the lowest form of life in the model world, and a very un-worthy cousin of the more popular types of model. But those who deride the chuck glider because of its similarity to the 2s beginner's model only show how little thought they have given to the matter. Regarded in the proper light, it will be seen that they possess exclusive advantages. To name just a few, they are inexpensive, their solidity and small wind resistance enable them to be flown in almost any weather, and almost any place, and a fly-away is by no means an impossible achievement, so put your name on even this small model.

Few good chuck gliders are seen in this country, and this article has been written in the hope that it will arouse a greater interest in the model. A welcome step in the right direction was taken this year by the many clubs who introduced an event for chuck gliders at their galas.

Design. When launched they are called upon to withstand loads often 36 times in excess of those when in normal flight, due to the initially high velocity. Consequently, construction is usually solid. The high drag due to this speed tends to retard the model during the climb, and for this reason the frontal area is reduced to a minimum, while the skin friction is reduced by a smooth finish.

To guard against any looping tendency during the climb, a low lift section at 0° incidence is usually employed. This, together with about 10° sweep back on each wing and about 3 in of dihedral per foot of semi span ensures an efficient climb, and facilitates a quick pull out at the top before the model has had time to lose height. The best weight for a model of the size illustrated is between 0.4 and 0.5 oz, and on no account should it be heavier than 0.7 oz.

Construction. The model described here is perhaps smaller than that generally accepted as the optimum, although its consistent flight average of 45 sec is proof of its suitability. The fuselage is very similar to the American style and is made from 3/32 in sheet spruce sanded to a streamlined section. The wings are cut from 1/8 in medium balsa and sanded to the section shown..." 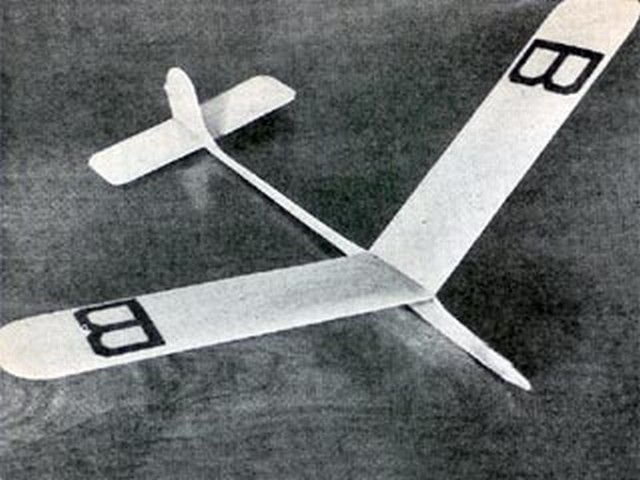