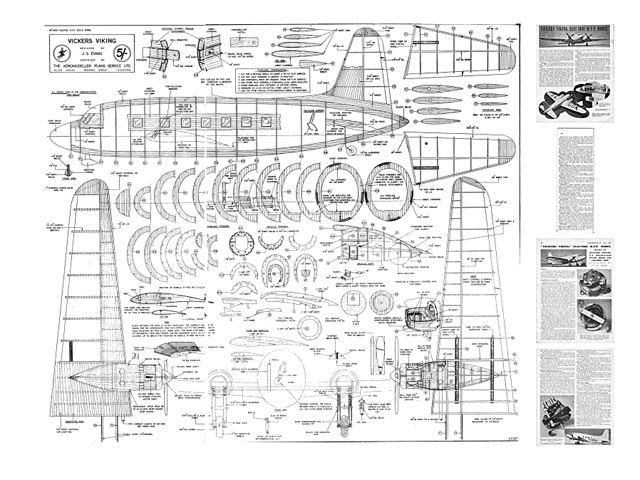 Quote: "Electric RTP flying places every conceivable type of aircraft within the reach of the model enthusiast. Amny of those who enjoyed watching the Vickers Viking at Doprland Hall expressed a wish to build one of their own, and these articles are the result. Next month the building and installation of the propelling and undercarriage motors, pylon and control box will be described. The Viking can be attempted by any aeromodeller who has built a successful scale model.

Fuselage. Cut out fuselage backbones and pin over plan. Build up half-formers on the board and add stringers, except those that will be in the way of the wing. Remove from building board and attach the other half-formers, taking care that they are all at right angles to the backbone. Insert spacing pieces to formers 6, 7 and 8 to take leading edge and mainspars of wings. These should have been cut out and tried for size before commencing assembly of formers. Stringers other than those in the way of the wings should now be added; the soft balsa nose, soft balsa block forming the cabin roof, and the cabin framework may also be fixed. The fuselage is then cut through laterally between formers 11 and 12 : 1 mm ply tongue and slots added - reference to the perspective drawing will clarify this - and four nuts cemented in place to take the fixing bolts. This gives easy access to undercarriage motor and gear train on motor platform, which can be slid out for inspection.

Wings. The wings may be built in two halves flat on the building board, each half comprising an outboard panel and its respective half of the centre section and nacelle. Dowels should be selected and about eight thicknesses of paper 6-1/2 in long wrapped tightly round them, sticking each layer. Wing ribs should then be drilled to receive these dowels in their tubes. Assemble the ribs on the building board with the dowel-holding ribs in place. Add leading and trailing edges and cement in place. The horizontal nacelle outlines may be laid in place. The upper parts of these, including inspection hatches, may be completed on the board with stringers..."

Article pages are included in planfile. 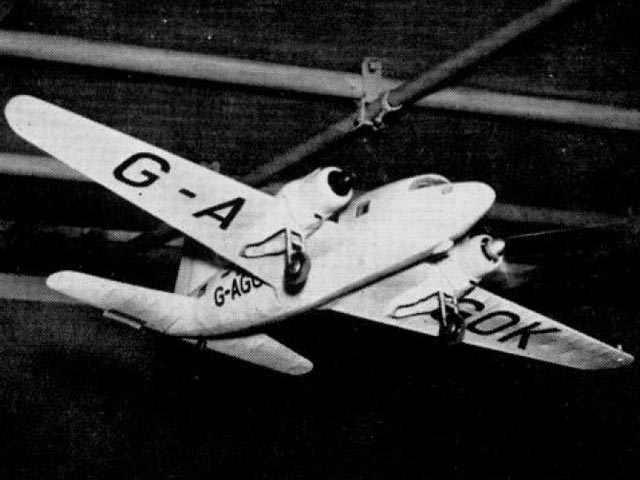 Found a great photo of the Vickers Viking in action, in the RCLibrary book History of Model Aircraft by Bowden, on page 66, have set this as the main model pic now.
SteveWMD - 26/08/2016
Add a comment