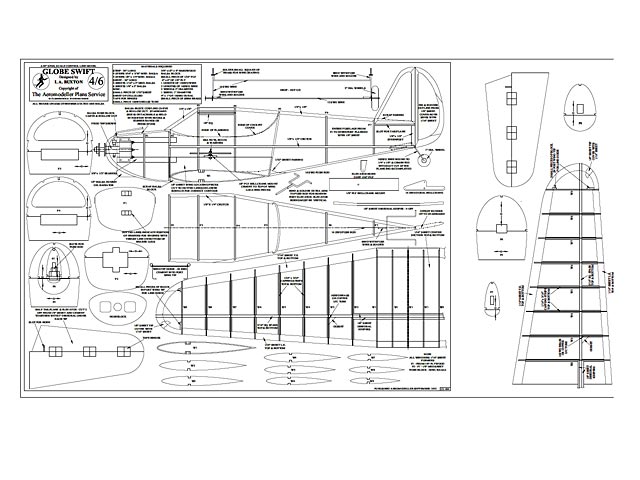 Quote: "For a realistic stunter, what could be better than this 40 inch span scale. Globe Swift, by Ian Buxton.

WE had been doing a good deal of flying with barndoor type models, giving our resident audience of small boys the satisfaction of witnessing several prangs (plus the added joy of seeing who could trip over the lines most often). We were very pleased with the performance of tlice models, but not with the appearance, so it was decided to build something with a little more eye appeal.

Then we saw the Aeromodeller article on scale controliners (February issue), and so out came the drawing board. We decided to build the model round our Yulon, since it had always given us good service, and the Globe Swift was chosen because of its good looks, short moment arm, and the large cowl, which hides the whole Yelon except the plug. A Frog 500 just protrudes from the cowling.

We decided to keep the model as simple as possible, and the only unusual feature is the dihedral on the tail unit, which necessitates a separate horn for each elevator. The model is extremely strong, the only damage to date being a broken tail unit, caused by dropping a heavy object on it..."

Quote: "Next is the Globe Swift, a 40 inch wingspan control line scale model by Ian Buxton. Engine size for this design is 5 to 6.5 cc (.29 to .30 cu.ins). This is a scale model of a plane that entered several full size races with varying degrees of success, however its size and shape are ideal for control scale. The side mounted motor all but disappears in the cowl and a drop of undercarriage will enhance the looks whilst in flight." 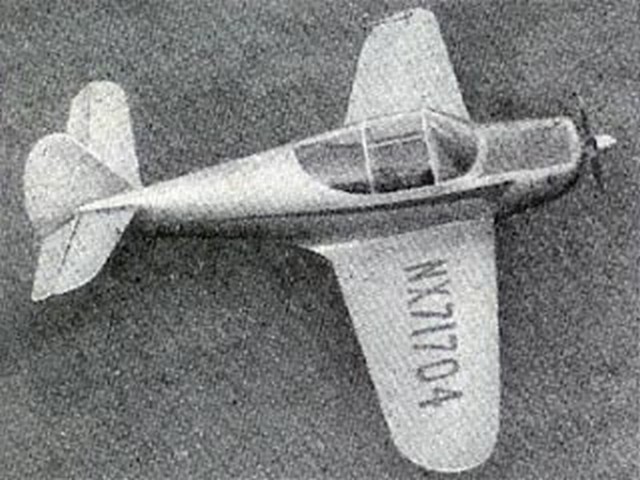 The plan looks great, I am looking for a 20 inch wing span to fly with very small servos and motor, my esc is about the size of a small postage stamp, but I can't find a small receiver. mine is a 6 channel but is the 2.4 GHz and not heavy. I like to build the old method. Stick and tissue things. Have been a modeler since age 10 and now just celebrated my 77th birthday alone with my 3 year old Chihuahua. We are avid indoor pilots. LOL.
LynnRayCarter - 23/11/2015
Add a comment